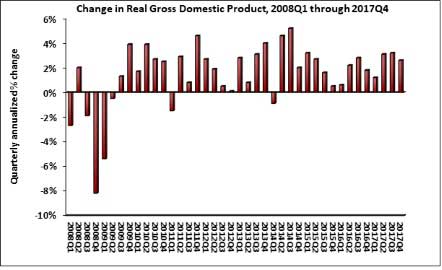 The U.S. economy grew by 2.3 percent in 2017, while fixed investment increased at a annual rate of 7.9 percent, according to an Associated Builders and Contractors (ABC) analysis of data released today by the Bureau of Economic Analysis.

“Many will look at this report and conclude that consumer spending, the largest component of the economy, drove fourth quarter growth by expanding at a 3.8 percent annual rate,” said ABC Chief Economist Anirban Basu. “Upon further inspection, however, the fourth quarter consumer spending missed its 3 percent expectation due to imports increasing at twice the rate of exports. This widening trade deficit subtracted 1.13 percentage points from fourth quarter GDP growth.

“The factors that have helped to accelerate economic growth in America remain in place, including a strengthening global economy, abundant consumer and business confidence, elevated liquidity flowing through the veins of the international financial system and deregulation,” said Basu. “Stakeholders should be aware that although many companies have announced big plans for stepped-up investment, staffing and compensation—due at least in part to the recently enacted tax cut—the plans have yet to fully manifest within the data. The implication is that the U.S. economy is set to roar in 2018.

“As always, contractors are warned to remain wary,” said Basu. “The combination of extraordinary confidence and capital can fuel excess financial leverage and spur asset price bubbles. The implication is that as contractors remain busy, there should be an ongoing stockpiling of defensive cash. That recommendation will be difficult for many contractors to implement, however, with labor shortages and materials costs rising more rapidly and slender profit margins in many construction segments.”