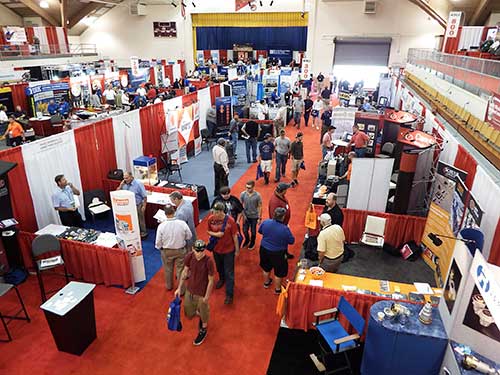 West Virginia Governor Jim Justice called for the passage of a $1.6 billion bond referendum, slated to come before WV voters on October 7. During an impassioned visit to the Bluefield Coal Show on September 13, Justice outlined how the passage of this referendum would benefit businesses of all kinds, including manufacturing, tourism and the coal industry once the state has approval to release previously legislated funds designated for road building and road repair throughout the state. Justice said that the work would begin immediately and that it would provide funds for projects already approved and awaiting funding.

Potentially, with the addition of monies hoped for from a federal infrastructure bill that is still a work in progress on the national level, the total money available to WV could approach $3.2 billion. Of that, $800 million would go for existing road and bridge repair while the remaining $2.4 billion would be devoted to new construction.

Justice began his talk by saying that he owes everything he has to coal. “We have a rebound and we want it to be even better,” he said. “I love West Virginia and I don’t have any ambition as your governor to [do anything other than] to get stuff done. I switched parties recently because we got so much less done in this session of the legislature than we should have, and I’m not going to do that again.”

He said West Virginians have a friend in Washington, D.C. with Donald Trump. “We can’t lose our eastern coal fields,” he said. He noted that he presented the idea to the President, emphasizing the importance of having these coal resources in place in case of a terrorist attack against coal, gas or oil coming from west of the Mississippi River. President Trump was quite receptive to that idea. “I will do everything in my power to do what’s best for West Virginia.”

With regard to the aforementioned referendum, Justice noted that a section of the Coalfield Expressway called “the road to nowhere,” (a section of Interstate 73/74 near Bluefield that has been a work in progress for the past 27 years but is yet to transport traffic), would become a part of the new construction. Working toward the completion of the I-73/74 corridor, the interstate will run from Michigan to South Carolina.

He noted that the projects in place that would begin with the referendum’s passing, would be in the ten counties surrounding the Bluefield area. He said, “We can’t possibly be dumb enough to walk away from the 153 projects in those counties that will bring in $545.2 million in revenue and 11,000 jobs. Constitutionally, every single dollar has to go toward roads.”

Justice also noted that the fears voters have about this referendum is that taxes will increase. He reminded people that the legislature has already completed its session and any increases have already taken place. He said if the referendum fails, the money already brought in to the gas tax fund will go back into the general fund and it will be “peed away! That’s what government does. Your roads won’t get fixed. Your money will be peed away. We won’t have our roads.”

“I love you [West Virginians] with all my soul,” he concluded. “I will never not tell you the truth. As long as God gives me breath, I’m going to do all I can do [to make West Virginia all it can be]. I want the federal administration to see that we are trying to help ourselves.”

Earlier in the morning, following the show opening welcome from Charlie Peters, coal show general chair since 1976, Hal Quinn, President and CEO of the National Mining Association, served as Keynote Speaker at the event’s media breakfast. Based in Washington, D.C., Quinn said that the coal industry will “need to revisit our business models” in the face of how the industry has changed following the Obama’s administration’s efforts to unnecessarily regulate the coal industry with “disabling” policies. Additionally, he said the shale gas revolution has become a very formidable competitor [to coal].

Quinn said the industry will strive to produce, deliver and use coal as an energy source as in the past. He related how renewable energy sources are artificially supported by tax credits and other funding sources. He said they are not a reliable source of energy for the long-term needs of the nation. Solar and wind hold such a small share of the total market that they send “distorted signals” and are not a part of a competitive marketplace. Secondly, part time generation of power from these sources does not provide the reliability that coal-fired plants have in supplying the nation’s power grid. Additionally, under the previous administration, coal was specifically penalized which changed the overall makeup of power generation.

“Coal is rebounding,” he said. “Natural Gas prices have increased which has increased the use of coal by about 5% to date. Exports of coal have run at about 52 million tons since the first of the year which is close to pre-2016 levels. Coal production is about 30 percent higher than last year. That projects to about 800 million tons per year. That number is expected to stabilize over the next couple of years.”

“The rebound and prospects for the much needed fix for this industry would have remained out of reach without the change in Washington, DC. The election of Donald J. Trump energized Congress [to pass regulation reform] with respect to our industry. The President, surrounded by coal miners, promptly signed the measure, which helped save about one-third of the industry work force while releasing approximately one-third of the coal resources across the nation,” he said.

“In March of this year, the President, surrounded by coal miners, signed an executive order on energy independence,” he added. “This did many things for coal and other energy sources, by directing an expeditious review of the clean power plant rule. We expect within the next thirty days that this rule will be repealed at EPA.”

Quinn noted that this will mean a savings of 240 million tons of annual coal production. That relates to the saving of 27,000 coal-mining jobs and another 99,000 high-wage jobs throughout the country. In recapping, Quinn said that the re-sizing of the coal industry did not happen by accident. “The coal industry is showing remarkable resiliency. We will continue to provide our country with energy security, assuring our country of strong economic growth for our nation as well as our community,” he said.