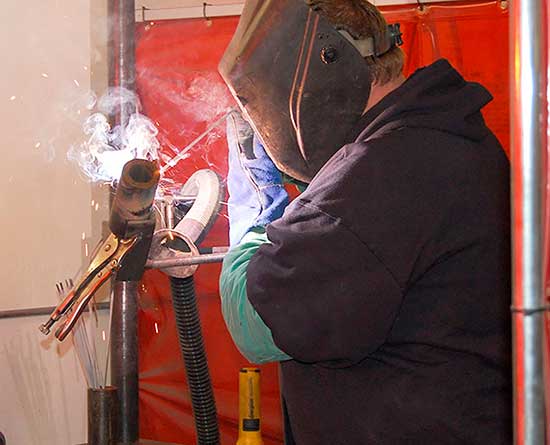 While some manufacturers face a shortage of skilled welders and long delays in filling open positions, Superior Industries in Morris, MN has deepened its pool of qualified workers with an uncommon, yet direct, approach to solving the problem.

“You can’t just go and pull someone off the street and throw a gun in their hand and say weld me a couple pieces together,” says Dave Dybdal, the weld training instructor for Superior and its subsidiary, Westmor Industries. “They have to know the basics and understand welding safety and blueprint-reading, and we were really having issues finding people who could do that.”

So, if finding trained welders is increasingly difficult, company executives figured, then why not just train eager workers yourself — and in a shorter timeframe, to boot?

Dybdal says that realization was the genesis of the company’s Weld Training Center, which, at its peak, has helped the company’s welders pass 250 certification tests in a single year. Under his oversight, what started 10 years ago in a corner of the company’s workshop quickly outgrew the onsite storage shed they next converted to house the program. Superior Industries, a member company of the Association of Equipment Manufacturers, finds great value in such a unique workforce development strategy that is easing its difficulties in finding skilled labor.

Today, the Weld Training Center has its own campus across town with 10 weld booths, two grind booths and a classroom for instructing new and veteran welders alike. Dybdal and his team are able to certify welders on a dozen or so methods of welding, offering training that takes weeks instead of months and saving the company on the cost of keeping its workforce current on the latest welding technology.

Yeah, it costs a lot of money to invest up front,” Dybdal says. “But if you want to keep moving forward, there’s no better way to do it than by investing in your own people and learning how to train and certify them yourself.”

Newly-hired novices begin their career at Superior partnered with an experienced welder on the factory floor for several months, assisting where they can and proving to the company that they’re reliable and motivated enough to warrant the investment in their training. “We’re not going to invest a bunch of money in someone from day one if we’re not sure how they’re going to work out,” Dybdal says.

If everything pans out, aspiring welders are then sent to the Weld Training Center, where they’re quickly prepared with the skillset they’ll need to succeed at their assignments. Though completion of a traditional vo-tech school’s program might take nine months or more, Dybdal says new hires at Superior are prepared to go to work in as little as three to six weeks.

The quicker turnaround is not achieved by cutting corners in safety and quality, Dybdal says, but by a personalized, job-specific training regimen, one-on-one instruction and the elimination of institutional hurdles like waitlists and enrollment caps. New hires are also able to earn a wage while they undergo their training — another departure from the traditional method of hiring certified welders who paid to learn their trade at a vo-tech school — which Dybdal says is an additional source of motivation.

In the decade since the program’s launch in 2007, Dybdal says Superior has seen its investment returned in other areas beside its robust, growing workforce. From a quality-control perspective, the company is able to meet the specific needs of its clients by training workers on specialized weld bead patterns, and new hires who have prior welding experience are still required to pass muster in Dybdal’s shop before they’re permitted to work on the floor.

But beyond that, the program reinforces Superior’s stated “Culture of Opportunity,” which rewards hard work and initiative among its workforce, and drives at a deeper point of pride among those who wield a welding gun for a living.

“I like being able to pass on to the younger generation that, to me, craftsmanship is not a thing of the past,” Dybdal says. “If we don’t teach that to the youth, they won’t know any better.”

Like many in his line of work, Dybdal worries that declining interest among young people in working with their hands might someday create greater difficulties in finding skilled workers. In order to try and combat that trend, Superior recently donated the equipment needed to jumpstart the local high school’s welding instruction program, and also hosts an annual welding competition for young people from across the state.

Perhaps most significantly, Dybdal has overseen the launch of a new mentorship program, where juniors and seniors can earn high school credit by learning their way around a shop floor at Superior, Westmor and the Weld Training Center. Launched in 2015, Dybdal says the goal isn’t necessarily to create a pipeline of young workers from the school to the company, but to instill in young people a passion and respect for skilled trade work.

“Don’t get me wrong, I’d love for them to come work for Superior and Westmor,” Dybdal says. “If not, that’s okay too. If anything, we’re exposing them to the skills, because if they aren’t exposed to it, how do they know what they’re missing?”