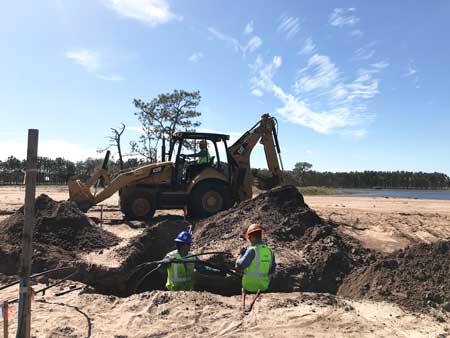 After the mass destruction by hurricanes Irma and Maria in the Virgin Islands, Puerto Rico, Florida keys and mainland Florida during the 2017 season, more than three quarters of Duke’s customers —1.3 million out of 1.8 million (in Tampa Bay)— experienced outages during this historic natural disaster. All 35 counties that Duke Energy serves were impacted. Once again it brought new debates about the wisdom of underground power sources vs. overhead installation.

“Hurricane Irma was the most devastating storm Duke Energy in Florida, as well as many other areas, has ever endured. Outages are more than just an inconvenience — the electric grid is the backbone of the digital economy that powers our lives and communities,” said Duke’s spokesperson.

While it is true that overhead lines get torn down, poles and transformers are hit by wind, rain and lightning, it is generally agreed that a 100 percent installation of underground lines is not a solution to the problems produced by hurricane force winds, heavy rains and flooding.

As the industry seeks to produce more power less expensively and more reliably, more underground power delivery is included as part of the basic infrastructure in new construction. Thus, it is not surprising that a majority of new residential and commercial developments in the United States are served with underground electrical facilities, which is the most practical and inexpensive way to install underground distribution.

One of Duke Energy’s latest projects has been with developer Beazer Homes, at Long Lake Ranch, southeast of SR 54 and Sunlake Blvd. in Lutz, FL (Pasco County). This particular phase is approximately 100 lots, begun in November 2017. F&H Contractors partnered to install the underground system. At this site, single-phase primary 1000 KCM cable was protected in a PVC conduit then buried approximately 36 inches underground. The crew moved about 1200 – 1500 feet per day.

Before the late 1980s most new construction had an overhead service connection. Today underground services are the standard and they are favored by homeowners for several reasons, most popular being aesthetics and lowered energy use and cost.

But underground electric lines are not a guarantee of zero outages during storms, and they can be more difficult to access. Both installation and repairs can be very invasive. Restoring power can often take longer because of the time needed to locate the problem, dig it up and make repairs. Often crews have to dig up driveways, go under buildings or further disturb property. It takes longer to put everything back together. And the feeder lines to underground power are still usually above ground.

Since the hurricanes in 2004 and 2005, Duke Energy has installed smart-grid technology and invested more than $2 billion in maintaining and strengthening the power delivery system, including inspecting and replacing poles and trimming vegetation and trees. Currently in Florida, Duke Energy has approximately 18,000 miles of overhead primary versus 14,000 miles of underground primary; 43.6 percent underground.

For customers with overhead electrical service, the primary power comes from the utility company’s power lines via a transformer mounted on the power pole. The heavy lines that hang between the transformer and the house are collectively called the service drop. For many people this service drop represents an unsightly and impractical solution to energy distribution.

According to a study done by Edison Electric Institute (EEI):

• “…undergrounding existing lines on a large scale is very expensive, the decision to convert overhead power lines underground must be made jointly by all parties involved, along with governmental representatives, communities and customers.
• “(Even though) much of the conversion cost is reduced by the salvage value of the overhead material being removed, the cost of converting electric lines from overhead to underground can be significant, approximately $1 million per mile of distribution lines. The future of such conversions depends on the ability of customers, utilities and utility regulators to work together to find viable funding.
• “Other cost factors also need to be considered, such as the cost of converting individual customers’ services/metering points so they can be connected to the new underground facilities and the substantial disruption caused by the undergrounding construction process — avoiding conflict with or limiting the damage to existing trees, walls, fences and other underground utilities.
“Despite the higher cost of underground construction, utilities do find value in building underground facilities. This is particularly true for new developments where undergrounding can be accomplished with (site prep).
• “In fact, every year for the last 13 years, utilities working with communities and customers have committed over 20 percent of new distribution construction expenditures toward the building of underground distribution facilities,” continued EEI study.

The data was somewhat inconclusive because the number of storms had increased, but the average outage time per customer declined at times. Underground showed a slightly better reliability performance than overhead electric systems, but as experienced with Hurricane Sandy in 2012, Irma and Maria in 2017 demonstrated, underground facilities are very vulnerable to flooding and water damage.

“So as part of our plans to build a smarter energy future, we’re developing a new customer information system and plan to invest an additional $3.4 billion over the next 10 years to further modernize the grid, including transmission improvements, advanced-metering infrastructure and advanced self-healing technology,” added Duke’s spokesperson, “approximately 23 percent of our customers are currently benefitting from self-healing systems that automatically reroute power during outages so interruptions are avoided or limited. Through this technology, 70,000 outages were prevented and nearly 10 million customer minutes of interruption (were) avoided in 2017.”

Hopefully, along with continued improvement in underground installation and maintenance, the move to advancing solar energy, smart meters, grid modernization projects and other renewable energy sources leads to a smarter energy future for all.