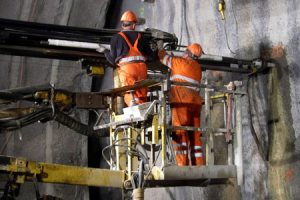 Drill and blast as an excavation method and other associated activities, have proven to be very adaptable, cost effective and ﬂexible, with recent developments in equipment and services helping to refine the process. In order to achieve increased production, manufacturers of equipment with a drill and blast focus are increasingly looking at ways to improve the processes involved. This has seen exciting developments that are taking the excavation process to new levels of productivity, delivering highly effective solutions with increasing levels of “intelligence” and automation.

At the sharp end

Tunneling jumbos are at the heart of successful drill and blast operations, being a key piece of equipment in the excavation process. Due to the use of established technology, new products are rare, but there have been many instances of what could be termed refinements of existing offerings.  This has seen jumbos becoming increasingly automated and highly fuel efficient, while including features that enhance environmentally friendly performance. These and other features have made them increasingly popular in underground construction projects throughout the world, especially if rock hardness and other factors prevent the effective use of TBMs.

As would be expected from a company specializing in providing equipment and services aimed at maximizing tunneling excavations, Sandvik Mining and Rock Technology has not been idle. Although its developments may be seen as refinements rather than totally new products, three models have been further developed — the DT912D, DD422iE and DT922iE drilling jumbos.

One of the models — the DT912D — is an autonomous and powerful face drilling rig (diesel powered drilling with on board compressor for flushing) designed specifically to repair old tunnels, whereas both the iE models are equipped with zero emission battery driven carriers. All have been specifically developed to deliver high efficiency rates and accurate drilling to ensure maximum excavation advance rate. The equipment has been designed with end users’ specific requirements in mind with ease of maintenance inbuilt as well as soundproofed and ergonomic cabins providing excellent working environments for the operators.

U.S.-based JH Fletcher & Co. Company is con tinuing to develop its line of tunneling jumbos, launching two models in 2017 — the single boom J101-AD/E and the dual-boom J152-AD/E. Designed for development and production drilling in mid-size headings, both jumbos are supplied with diesel tram and electric drill with options of full function from power sources — diesel or electric.

Equipped with two powerful BUT S booms, the Boomer S2 is highly productive for its class thereby facilitating compact face drilling rig in small drifts. The requirements of the operators have not been forgotten with an optional ROPS/FOPS certified cab being available. Actual working conditions have also been accounted for with the S2 having fewer boom hoses and excellent visibility for maneuvering in tight spaces incorporated into the design of the rig. 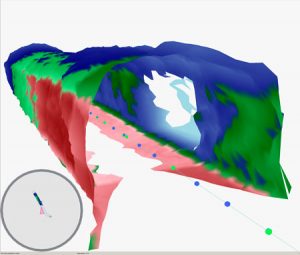 The Atlas Copco S2 drilling jumbo comes complete with a range of automation and IT-based developments.  The company’s “Dynamic Tunneling Package” is automation software for face drilling rigs, which gives improved excavation accuracy. This is accomplished due to the fact that drill plans are fitted for the current section. With this software, the drill rig can create its own drill plans directly at the face of the tunnel. Downloading the contours of the tunnel to the drill rig, along with a drill rule file, enables the drill rig to create drill plans tailored for the section it is navigating.

JH Fletcher has developed its own “Fletchbus” system, which operates as a smart hub for machine operations and data collection, enabling users to receive more interlock and safety features, diagnostics, flexibility and an increase in performance. The system also allows for custom programming specific to the machine and operation.  The Fletchbus system may also be equipped with programs such as the Graphic Operator Angle Display (GOAD). This system utilizes sensors on the boom and feed mechanisms that display hole angles and depth of drilling on an in-cab monitor. This ensures accurate boom and feed alignment for precise hole placement and direction.

Another variation of the GOAD system is the “Multi Plane Assist” (GOAD-MPA).  This system gives the operator the same full graphic display as the standard GOAD system; displaying the drill feed angle in both the horizontal and vertical planes for each boom, and a separate screen with grid style target system. The system is programmed with drill round, enabling the operator to automatically or manually position each drill feed to a specific coordinate.

Sandvik has further developed its iSURE software for optimized face drill and blast design, bolt plan design, long hole design and drill rig analysis specifically for improving the quality of excavation. It comes with rock analysis software and support for an onboard 3Dscanner (point cloud) facilitating visualization and excavation process quality control. What is interesting concerning the Sandvik development is that it includes specific features to incorporate the drill and blast process.  All drilling and blasting related design tasks are included in the same software enabling for advanced burden calculation-based drill plan design and hole placement definition, as well as a comprehensive set of tools for drilling and blasting pattern design.  In addition, and further adding to the software’s functionality, it also includes explosives data — the weight of explosives and the total amount of explosives per round.  Furthermore, the detonator is designed specifically for vibration control, which is essential for smooth blasting and excavation in urban areas.

Another development from Sandvik has been its 3D scanner which is now integrated on Sandvik’s DD422i, DT922i, DT1131i and DT1231i drill rigs, providing immediate feedback for the operator concerning excavation results by visualizing the scanning data in the screen of the drill rig. The Sandvik 3D scanner creates a clear under and overbreak analysis illustrated with colors on the screen, allowing the operator to immediately react to the underbreak spots. Objects like machines and persons inside the tunnels are automatically removed from the scanning data, facilitating rapid and easy positioning of the drill rigs.  The scanner is available as standalone application that can be integrated on any vehicle, for example, by use of a normal tablet PC providing the user interface.

No matter how sophisticated the drilling jumbo or how advanced the IT system is, if the tools aren’t up to the task then operations will flounder. Finnish company Robit has been refining its offering for tunneling operations with equipment being designed to fit Atlas Copco/Epiroc, Sandvik and other manufacturers’ jumbos. Robit’s reaming equipment has been designed to deliver faster and straighter drilling of cut holes. This is accomplished with dome reamers with an integrated pilot; the reamer itself being composed of a pilot adaptor or chisel and reaming bit. Robit’s rods are manufactured using carefully selected hollow drill steels, with the drill rods ensuring maximum strength with long thread life.

The latest generation of Sandvik jumbos are now equipped with high frequency Sandvik RD525 (25 kW) hydraulic percussive rock drills. This enables the DTi series jumbos to deliver 10–30 percent higher penetration rates. In addition to this, the new rock drill gives 17 percent longer bit life and 40 percent more meters per shank than the previous model in its class. This has been accomplished through the use of an advanced patented stabilizer that dampens harmful shockwaves. The Sandvik drill’s simple body structure, modular construction and visual wear indicators have been designed to provide ease of use and maintenance, while the lubrication of the rock drill reduces parts wear.

Piston lifetime in the tunnel version is extended by a new piston in stainless steel, while bushing seat wear is minimized by a press fit, one piece bushing locked by an additional pin. An exchangeable wear plate protects the hammer body and durability is enhanced by heavy-duty retainer bars and a locking pin.  The special tunneling tool with a collar supporting a robust front shield and dust cover minimizes the dust intake when working on overhead areas. Two restrictors are available which enable the performance of the hydraulic breaker to be adjusted for either traditional scaling operations or for more challenging rock breaking jobs.  The new tunnel versions are suitable for excavators in the weight class from 4.5 to 13 tons and standard underground scalers. Service weights are 315 kg (690 lbs) for the SB 302 and 450 kg (990 lbs) for the SB 452.

With a service weight of 3,858 lbs, the ER 1500 double head machine is suitable for carriers of 20 to 40 tons. The ER 1500 uses large spur gears driven by a high-torque hydraulic motor with robust gear wheels allowing the drum cutter to be used in the most difficult conditions. A central fixing system enables the drum cutter to rotate 360° without having to be disconnected from the excavator, with low vibration and quiet operation. The ER 1500 is designed to operate in sensitive areas.

Crushing at the face

There have been some specific developments of tracked, mobile crushers specifically for underground construction operations.  The reasons are easy to see, as rock from tunnel excavations is a highly valuable resource which may not been used to its potential. Now, however, a combination of customer requirements and developments in crushing technology, along with growing commercial pressures, has seen tunneling contractors use excavated rock as part of the tunneling process itself.

Austrian company SBM Mineral Processing GmbH launched in 2017 the SBM’s STE 100.65 TV PB. This is a mobile track-mounted jaw crusher designed to operate in the most difficult tunneling conditions. Although relatively new, the crusher was put through its paces during the construction of the Albula Tunnel in Switzerland. The crusher possesses the ability to work in confined spaces and possesses a low feed height of 2m along with specific tunneling safety aspects such as a fully electric drive system and a dust reduction system.

Finnish company Metso has also developed a crusher for tunneling. This arose when a customer requested the supply of a tracked unit to work at the face of a tunnel excavation in Switzerland, which required the crusher to actually be transported vertically down a tunnel and has led to the development of the “split” LT106E tracked jaw crusher.  The Metso crusher is electrically driven and can be split into parts no longer than 7m for lowering. Additionally, the constant crushing capacity is 300 tons per hour in order to meet crushing demand. The disassembly, lowering and re-assembly in the tunnel functions well, with the unit proving reliable and powerful enough to meet capacity requirements.

There is little doubt that many of the trends seen in 2018 will continue into 2019. IT systems which not only maximize the performance of underground drilling, but also marry the rig’s performance to blasting and the entire tunneling process, will continue to be developed. Environmental performance has become increasingly important, with the improvement of air conditions in tunneling being considered to be essential. This has led not only to the development of systems and technology aimed at reducing the effects of dust etc., but also the redesign of drill rig cabs to deflect emissions.