Trillium, one of the n 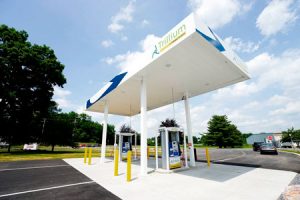 The facility is the fourth of six new public CNG fueling stations Trillium is designing, building and maintaining for numerous transit authorities in Pennsylvania as part of a public-private partnership (P-3) contract PennDOT awarded to the company in 2016.

The P-3 project will provide CNG to more than 1,600 buses at transit agencies across Pennsylvania, including 11 at the Indiana location. The agreement also brings 23 additional private CNG facilities to the commonwealth.

The station, located at 1640 Saltsburg Avenue in Indiana, is open 24/7 and features one public CNG dispenser and one private CNG dispenser. It will primarily serve IndiGO’s fleet of CNG buses, but it’s also open to the public, including light-, medium- and heavy-duty trucks.

Larson Design Group of Williamsport, Pennsylvania, is assisting with the construction of the locations. Additional public facilities are scheduled to open at transit authorities across Pennsylvania in Lackawanna and Erie Counties in later phases of the project.