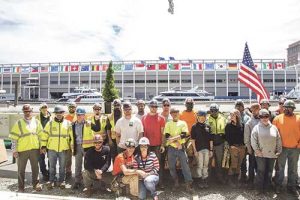 Tishman Speyer, one of the world’s leading developers, owners, operators and asset managers of first class real estate, hosted a crowd of 200 on June 7 to celebrate the topping off the office building construction at Pier 4 in Boston’s Seaport District. Attendees included representatives from Turner Construction, several sub-contractors, Elkus Manfredi, The Boston Consulting Group, and Tishman Speyer.

The ceremonial final beam, painted white and signed by attendees, was hoisted, put in place and secured, as the crowd cheered. George Gaughan and Jamie Meiser of Turner Construction spoke to the audience, praising the efforts of project construction workers, many of whom were on hand.

The structure being topped off, when completed, will be a 13 story, commercial building, primarily for office use consisting of approximately 373,000 rentable square-feet. The Boston Consulting Group is combining two Boston offices and relocating to Pier 4, where it will be the anchor tenant, leasing approximately 200,000-square-feet of space. That will leave the additional office space available for one or more tenants. The building will also include ground floor restaurant/retail space.

The Pier 4 building that was topped off represents the first phase of what will be the Boston Seaport’s signature waterfront development — the only         development surrounded on three sides by water — which will also include a nine story, 106 unit luxury residential condominium building, a three level below grade parking facility and a new one acre public park. Tishman Speyer, which develops and operates properties to meet high sustainability standards all over the world, expects to seek LEED gold certification for the project.

Located adjacent to Boston’s Financial District, but formerly cut off from the rest of downtown by “Big Dig” construction, the Seaport District has become the epicenter of new development in the area. Its waterfront location, convenient access to transportation (rail, highway and airport) and existing yet growing amenity base are drawing commercial space users and residential buyers and renters in large numbers to form a vibrant 24/7 community.