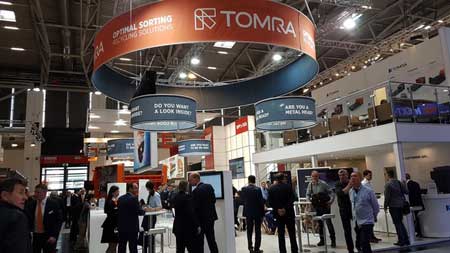 TOMRA Sorting Recycling experienced high levels of interest in its sensor-based sorting technologies at IFAT 2018, the world’s leading trade fair for environmental technologies, which concluded on May 18.

The five-day event at Messe Munchen, Germany, which is known for attracting more than 130,000 people from almost 200 countries, was again very busy. Many visited TOMRA’s exhibition stand to learn about the company’s latest sorting solutions, showcased on the ‘Metal Recycling’ and ‘Waste’ sections of the stand, and to hear about TOMRA’s expectations for future innovations, spotlighted on the ‘Circular Economy’ and ‘Future’ areas of the stand.

Tom Eng, Senior Vice President and Head of TOMRA Sorting Recycling, commented: “The high number of industry professionals attending IFAT 2018, and the high quality of enquiries received by TOMRA, show how demand is growing for sorting solutions. This is partly due to tougher new regulations, such as China’s National Sword policy, but also reflects the increasing environmental awareness of consumers.”

“More countries around the world are calling-out for effective sorting and recycling technologies, and there’s real interest in future progress through innovation,” he continued. “TOMRA believes the most significant near-future advancements will be in the increased sophistication of artificial intelligence, which is already integrated in TOMRA’s machines to a greater extent than in any other manufacturer’s.”

TOMRA’s entire way of thinking is motivated by various aspects of innovation – not only in the machines TOMRA develops and manufactures, but also in the company’s vision for our planet’s more sustainable future.

Innovative technology continues to be the central focus for TOMRA Recycling. A recent example of this is TOMRA’s new Laser Object Detection (LOD) system, capable of detecting material that near infrared technology (NIR) cannot. This enables waste and scrap recycling operations to reach previously unattainable final-product purity levels – an even more desirable advantage now that China has introduced its tough National Sword policy, which bans the importation of 24 types of solid waste, including various plastics and unsorted mixed papers. Another recent example of TOMRA’s innovative technology is AUTOSORT BLACK, the first machine to recover valuable black polymers from packaging materials.

Another pillar of innovation is in revolutionary developments in a broad range of applications. A good example is how TOMRA Sorting Solutions has enhanced AUTOSORT so that it is now possible to separate single-layer PET trays from PET bottles. This new application enhances AUTOSORT’s previous capability to separate multi-layer trays.

By continuing to focus on the future of innovation, TOMRA has taken great strides in further enhancing its digital approach to supporting customers. To demonstrate this, the ‘Future’-themed consulting station on TOMRA’s IFAT stand enabled visitors to interact with live data using TOMRA Insight. This sophisticated software and telematics system provides customers with remote, real-time information about the management and performance of their recycling machines.

The circular economy continues to drive TOMRA’s commitment to a sustainable future. As an illustration of this, in 2017 TOMRA signed-up to the New Plastics Economy, a three-year initiative led by the Ellen MacArthur Foundation. This brings together businesses, governments, scientists and citizens to accelerate the transition towards a global plastics system guided by the principles of the circular economy.