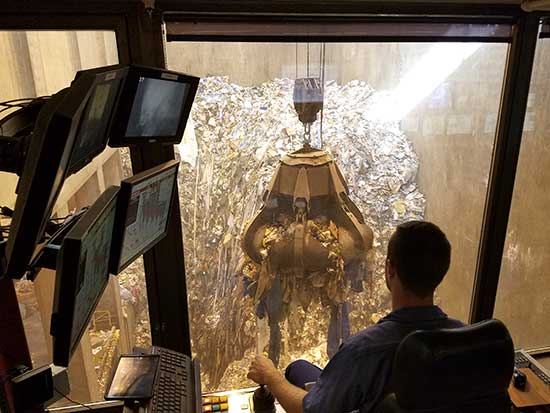 Olmsted County, Minnesota’s Waste-to-Energy Facility (OWEF) is celebrating its 30th Anniversary this year. The OWEF, a mass burn facility, was one of the first waste-to-energy (WTE) facilities to be constructed in Minnesota.

Anthony Wittmer, communications coordinator for Olmstead County Environmental Resources Department, explained, “The heat produced by burning municipal solid waste (MSW) in the facility’s three combustion chambers creates steam. This steam is used to generate electricity and to heat/cool buildings in the Olmsted County District Energy System (DES). Over 30 county and municipal buildings purchase energy from the OWEF. Excess electricity not required by the DES is sold to the local power grid.” The facility also generates income from tipping fees paid by waste haulers, and by selling scrap metal recovered by an excavator equipped with a large magnet that sifts through the piles of ash. No property tax money has been used in its construction or operation.

OWEF is computerized and automated, so the whole process can be monitored and controlled from the control room by a few employees. They have information at their fingertips from hundreds of sensors located throughout the plant, and can control operations 24/7.

Fires in the three combustion chambers are controlled at 1800 degrees F. The water filling the tubes lining the walls of the three combustion chambers turns to steam, and when the steam reaches 600 psig, the steam rushes through Turbine Generator 1 or Turbine Generator 3, followed by Turbine Generator 2 as the pressure and temperature of the steam drop, producing electricity. Some of the steam is also routed through well-insulated underground pipes to heat buildings and provide steam for absorption chillers. Buildings in the DES include the Rochester Public Library, Federal Medical Center, City/County Government Center, and Mayo Civic Center, among others.

The grapples can grasp three cubic yards of refuse weighing up to three tons. Highly skilled operators pick out undesirable material and move it into roll-offs destined for the landfill. An operator once rescued a kitten from the pit by carefully maneuvering a bucket containing a warmed tamale beside the kitten. Attracted by the tamale, the kitten climbed in, was lifted to safety, and taken to the animal shelter.

“We can’t burn big, bulky items efficiently,” explained Wittmer. So mattresses, carpets, and upholstered furniture are run through a Doppstadt DW 3060K Low Speed Shredder before they’re transported from the Kalmar Landfill to the OWEF. Shredded, they make excellent fuel.

The third burn unit was added in 2010. Together, the three burn units have the capacity to incinerate 400 tons of garbage per day, giving Olmsted County and neighboring Dodge County plenty of combustion capacity. Combustion in the burn units reduces the volume of incoming MSW by about 90 percent. The ash produced by combustion is stored in dedicated Kalmar Landfill cells.

In 2012, Olmsted County began reclaiming landfill space by extracting previously buried municipal solid waste (MSW). The “mined” MSW is run through a Doppstadt SM726 Trommel with a 1¼-inch screen to prepare it for use as a biofuel to produce additional steam energy and electricity. Instead of opening new landfill cells, as would have been expected, the Kalmar Landfill has been shrinking.

“We have had a less than zero growth landfill four out of the last five years. Without the Olmsted Waste-to-Energy Facility, our currently permitted landfill would have been filled to capacity by 1997,” stated Wittmer. Instead, over 50 years worth of landfill space remains today because of the careful planning by the Olmsted County Integrated Solid Waste Management System.

In 2016, approximately 49 percent of waste generated by Olmsted County was recycled, and work is constantly being done to find ways to increase that percentage. Ninety percent of waste not recycled is diverted from the landfill and delivered to the storage pit at the OWEF.

From there, it is moved by the grapples to the three burn units as needed. “Waste-to-energy has proven to be a safe and effective means of managing our wastes locally. Thanks to the investment our community has made in this facility; we will continue to serve the needs of an ever-growing population through environmentally responsible waste management. Without this system, we would have had to permit and build two and a half additional landfills to handle the waste produced by Olmsted and Dodge Counties over the last 30 years. During those 30 years, over two million tons of garbage have been diverted from the landfill for processing into energy at the OWEF.

“Put another way, during the past 30 years, enough energy has been produced each year by the OWEF to power 6,000 homes.”

In the first two burn units, each combustion chamber has three tiers: the top tier is a grate that holds wet garbage (including “reclaimed” MSW) until it has dried; the second tier is where most of the combustion takes place; the third tier provides space for completing combustion, and catches “slag” from metal items like soup cans and pop cans, “which should have been recycled. Here they produce zero energy.”

The third burn unit, modeled after an Austrian design, uses a sloping floor to accomplish the same results, according to Wittmer.

The fly ash is stored in silos before being processed through a conditioner mixer, which converts “the dry dust into a moist, soil-like consistency.” It’s then mixed with bottom ash from the combustion chambers and transported in covered containers to a specially constructed ash-only cell at the Kalmar Landfill.

The leachate from the ash-only cells is clear, odorless, and “almost meets drinking water standards,” a far cry from the dark leachate from landfill cells containing buried garbage. All leachate is regularly monitored. Beneath the landfill, groundwater is further protected by a three-foot layer of compacted clay, two layers of 60 mil HDPE plastic, and another 2½-feet of compacted clay. “After 30 years, there has been no sign of leachate movement into a lower level,” noted Matt Anderson, OWEF Assistant Solid Waste Operations Manager.

What about the quality of air emissions from the OWEF? The Air Pollution Control (APC) is first rate, including a bag house system and filtration through activated carbon. In addition, ammonia and lime slurry are injected into the combustion chamber and APC system respectively to remove even more potential air pollutants.

“We continuously monitor our emissions to make sure they are well below stringent Minnesota standards, as well as Federal air pollution control limits,” continued Wittmer.

John Helmers, P.E., director of Environmental Resources for Olmsted County, noted, “Our Board makes sure we have the resources we need to operate the facility at optimum. This is important in keeping emissions as low as possible.”

However, to keep up their excellent record, the County can’t have just anything dumped into the curbside garbage. Some things MUST be kept out. To help educate consumers and businesses about what can and cannot be put into their curbside garbage, Olmsted County maintains a website (olmstedwaste.com) with a “Waste Wizard.” Residents type in the kind of waste they’re wondering about, and the “Waste Wizard” tells them whether it can go into regular garbage destined for the OWEF’s incinerators, or whether it needs to be dropped off elsewhere. “We will continue to inform residents that there is a proper place for their waste in Olmsted County,” added Wittmer.