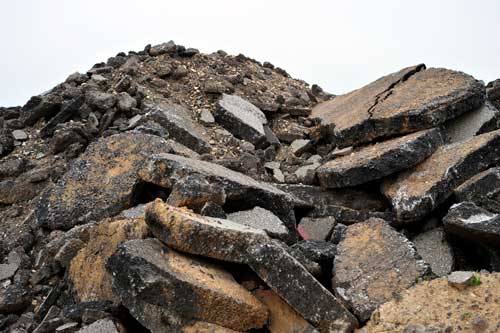 The same survey found that more than 31 percent of asphalt pavement mixture produced in 2016 was produced as warm-mix asphalt, which decreases energy demands, reduces air emissions, and improves compaction at cooler temperatures.

The survey of the U.S. asphalt pavement mixture production industry has been conducted for each construction season since 2009 by the National Asphalt Pavement Association (NAPA) in partnership with the Federal Highway Administration (FHWA). Over the years, the survey has documented increases in the use of recycled materials and warm-mix asphalt.

According to the most recent survey, more than 79 million tons of recycled materials — primarily RAP and RAS — were used in new asphalt pavement mixtures during the 2016 construction season. Ground tire rubber, steel and blast furnace slag, and recycled cellulose fibers were among the other recycled materials used in new asphalt pavements. The use of RAP and RAS alone resulted in cost savings of more than $2.1 billion compared to the use of virgin materials.

“Although we are seeing continued increases in the use of recycled materials in asphalt pavement mixtures,” stated Dan Gallagher, 2017 NAPA Chairman and Chief Operating Officer of Gallagher Asphalt Corp. of Thornton, Ill., “there is still room to improve. Through engineering, performance-based specifications, education, and improved RAP processing, production equipment, and procedures, we can continue to make greater use of recycled materials in long-lasting, high-performing asphalt pavements.”

The survey also found that at year-end 2016 about 93.6 million tons of RAP was stockpiled for future use across the country. Reclaiming RAP for use in future pavements saved nearly 50 million cubic yards of landfill space during 2016.

Although national usage estimates were not calculated, respondents to the survey reported recycling some 786,000 tons of ground tire rubber, slags, cellulose fiber and other materials into nearly 6.3 million tons of asphalt paving mixtures.

The use of warm-mix asphalt has held relatively steady at greater than 30 percent of all asphalt mixture production since 2013. A slight, 2.5 percent, decrease in the use of warm mix in 2016 compared to 2015 is attributable to a drop in total asphalt mixture tonnage produced for state departments of transportation.

Warm-mix asphalt is produced with a range of technologies that reduce the production and placement temperature of asphalt pavement mixtures. The most common technology is plant-based foaming, which injects a small amount of water into the asphalt mixture during production. A variety of environmental, worker safety, and construction benefits have been realized through the adoption of warm-mix asphalt.

“The use of warm-mix asphalt technologies is becoming commonplace. In 14 states, more than half of all asphalt pavement mixtures were produced as warm-mix asphalt, and in three of them, more than 75 percent was produced as warm mix,” stated NAPA President Mike Acott. “This said, there remains room to increase its use, and we expect road owners to continue to embrace these technologies for their construction and performance benefits, as well as the energy savings they bring.”

The survey was conducted in mid-2017. Results from 229 companies with 1,146 plants in all 50 U.S. states, along with data from state asphalt pavement associations for 34 states, were used to compile the report. A copy of the full survey report, including a state-by-state breakdown of data, is available at www.asphaltpavement.org/recycling.