Skip to content
The 1915Çanakkale Bridge was officially opened in a ceremony attended by Turkish President Recep Tayyip Erdoğan on Friday, March 18, 2022. 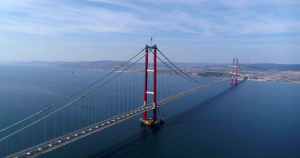 Taking it’s title as the world’s longest mid-span and highest tower suspension bridge, the 1915Çanakkale Bridge was completed 18-months ahead of schedule.
Tendered by the Turkish Ministry of Infrastructure and Transport, General Directorate of Motorways on 2017, financed and constructed by the Turkish-Korean joint venture partners – DL E&C–Limak–SK ecoplant–Yapı Merkezi – the 1915Çanakkale Bridge and Motorway will enable the crossing between Asia and Europe continents in six minutes through the Çanakkale Strait (Dardanelles). It will also provide a new heavy transit alternative to the Istanbul Strait passage, meaning faster and more cost-effective freight transport, as well as strengthened economic, political, tourism and social bonds for the region. 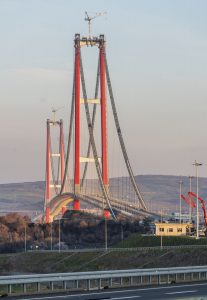 About the 1915Çanakkale Bridge
At a total bridge length of 4,608 metres, a central span of 2,023 metres and a total bridge tower height of 318 metres (334 metres the top point), the 1915Çanakkale Bridge is the longest mid-span and highest tower suspension bridge in the world. The Bridge connects Gelibolu on the European side, with Lapseki on the Asian side. The bridge is named as 1915Çanakkale in honour and remembrance of the Çanakkale Battle during World War I that took place between Turkish and Allied forces. 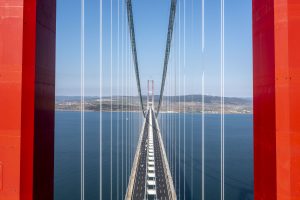