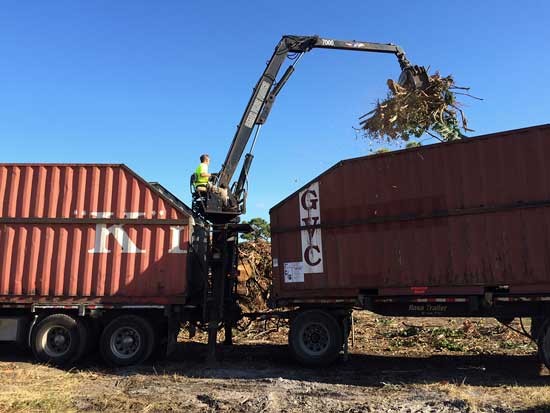 The state of Florida is by all standards pretty well prepared for hurricane season. Experiencing many hurricanes; devastating memorable storms like Elena and Andrew, as well as the 2004 season with Charley, Frances, Ivan and Jeanne.

It had been 13 years since the area was hit so hard. Governor Rick Scott declared a state of emergency as all watched the weather stations post the spaghetti models; changing predictions as to where the storm would go almost hourly, each municipality doing its best to prepare for the worst.

Thankfully, Tampa Bay did not take a direct hit but the aftermath of Irma left the City of St. Petersburg along with a large part of Florida reeling under thousands of tons of debris left by a long-lasting rogue hurricane.

How to rapidly dispose of such a huge amount of material became the focus of the City of St. Petersburg’s Mayoral office. It was obvious that an innovative approach would have to be taken. The integrated plan put together by Mayor Rick Kriseman’s office to expedite the collection and recycling the debris from Irma included the departments of Public Works, Parks and Recreation and Sanitation working together in a systematic way.

“We have put together an innovative, creative hybrid plan for debris removal. There are several collection sites for debris around the city using vacant lots and parking lots,” said Ben Kirby, Communications Director in the Mayor’s office.

“You can find a map at www.StPeteRecovers.com,” added Kirby, “which identifies neighborhoods where collection has happened, collection is scheduled to happen and where we will be collecting next. “We have 30 yard self loaders, 2, 6 and 12 yard dump trucks, 30 yard rolloffs, 25 and 32 yard rear loading garbage trucks, pay loaders, backhoes and skid steer loaders,” stated Kirby.

There are sites throughout the city where the debris from the neighborhoods is collected. These sites are comprised of vacant land and parking lots. From there the debris is brought to one location in South St. Petersburg at Maximo for processing. At this writing (October) the city is using only one Morbark 3800 Wood Hog Horizontal Grinder to create mulch and compost.

“City teams made up of Public Works, Parks and Recreation and Sanitation and other cross-departmental personnel are collecting debris street by street and bringing the material to these sites for collection and processing,” added Kirby, “ending up at the Maximo site where all of the material will be measured and then ground into mulch and compost.

After-storm debris clean up is ordinarily done by the St. Petersburg Parks and Recreation Department where Phil Whitehouse serves as superintendent. Whitehouse has been part of debris clean up since Hurricane Elena in 1985 and he was part of the effort in Homestead, when Andrew devastated that area.

Whitehouse notes that there has never before been an event of this magnitude in the state of Florida where so many areas were hit and some of the more rural districts were still waiting for people to get to them.

“There are about 250 contracts for clean up out there and when Harvey hit in Texas much of the available equipment was sent to help with that massive cleanup. When you add in the unprecedented involvement of the entire state of Florida with massive damages in the Keys and Naples, Southwest Florida and the central, more rural counties, the availability of equipment becomes one of the most important factors to consider.

“That is why we are so pleased with the effort being made in the city to work closely together to get this problem solved,” added Whitehouse. “The City of St. Petersburg has done an excellent job of pooling resources to get this job done.”

The City has been working with CrowderGulf, LLC, a disaster support team dedicated to provide rapid, coordinated and efficient response to any disaster situation. For many years Parks and Recreation has a contract in place for after-storm debris pick up. Clean-up began the day after Irma went through the area, Sept. 11, 2017.

Tetra Tech is monitoring the measurement of the debris at the Maximo site. As one of the world’s largest development and professional services firms, Tetra Tech tracks the figures as debris is measured and certified.

A steady stream of eight tandem units were certified separately as they came in. And each additional truck, no matter the size, has the amount of material they hold posted on the side of the vehicle. Tetra Tech, using a scissor lift, has the job of inspecting and certifying each load as to content. This is how the amount of debris is calculated. Accurate calculations are critically important because the county will be applying for FEMA AID and reimbursement.

As of the date of this article 70,000 cubic yards had been collected and approximately half of that had been processed. It is estimated that more than double that amount will be gathered.

“The current estimate from CrowderGulf and Tetra Tech is 150,000 cubic yards before processing,” stated Kirby. “We are reasonably confident it will exceed that number.”

As noted before, a key element in the recycle operation in the City of St. Petersburg is the cooperation among the entities to get the job done in order to help residents return to normal.

Sanitation trucks, speed loaders and even hand loading can be seen in almost every neighborhood, slowly and relentlessly attacking the debris piles from peoples’ property and away from the streets.

Because of the extraordinary amount of mulch being produced, the City of St. Petersburg is negotiating contracts with several farms and companies to haul away the product for land fill, incineration, mulching of farms and possibly to private giveaways. To illustrate the contrast in quantity of product, ordinarily the city has a contract with one farmer in Manatee County who uses the bulk of the mulch and compost on his tomato farm.