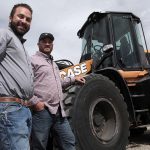 Tasman Geosciences relies on the connection with its dealer service department made possible through CASE SiteWatch to keep ahead of planned maintenance activities and to keep their equipment up and running.

Derek Palmer, the construction operations manager who leads the Tasman excavation unit, said the team is typically operating on sites where visibility, attention to detail and precision run paramount to speed and productivity.

On a recent job near Denver, CO, Tasman used a pair of CASE CX350D excavators and one each of the 621G and 721G wheel loaders to execute remediation projects. Each project is generally proprietary and/or confidential with the client, but the equipment flow/material handling stays pretty consistent.

“We’re using these machines to mix material in the ground and clean it up,” Palmer said. “The CX350D is typically throwing to one of the CASE wheel loaders and we’re stockpiling and working back towards all clean walls. When we’re done, we push the site shut and pack it tight.”

The 350D excavators feature 268 hp and 56,157-foot pounds of bucket digging force. With cycle times that are up to 12% faster than previous CASE excavators and the increased breakout force, they’re “truly workhorses” for Tasman’s operation, Palmer said.

“[The 350D] is very smooth for as powerful at it is,” he said. “It has great power. We haven’t come across anything that we can’t break out of the ground with minimal effort.”

Combining that power with smooth hydraulic operation is critical, as much of the group’s final grading work is done with the excavator, and the 350D is accurate enough that they don’t require a precision system. That speed, accuracy and responsiveness is achieved in part through a new electronically controlled pump, a larger control valve and multiple sensors – all which combine with the CASE Intelligent Hydraulic System (CIHS) to make the best use of the machine’s power and momentum.

“Having a boom that carries or a stick that bounces would make our job very difficult,” Palmer said. “With the two 350s we have, that’s not the case. They’re very smooth. You can load very delicately, and you can dig delicately [even] with such a large machine.”

Another major factor for Palmer is the visibility and jobsite awareness afforded by the cab’s visibility and the rear- and side-view cameras mounted on the machine.

“One of my favorite things about the CX350D is it has a blind side camera,” he said. “That boom camera helps me run next to fences and things that I would never see on the side of my boom.”

Tasman’s job sites can be relatively tight with existing infrastructure in place. The CASE wheel loaders are nimble enough (even with a full size machine) to get around sites without damaging those structures but big enough to keep up with production rates.

A primary feature for Tasman on the CASE wheel loaders is the machines’ visibility. With an operator environment inspired by automotive design, the CASE 621G and 721G feature electro-hydraulic controls, ergonomic design and operator interfaces that make operating simple and more efficient.

But for Tasman, the biggest factor is being able to see everything clearly at all times.

“[Safely navigating the site] is a big deal and it’s a nice wide-open cab – not any obstructions,” Palmer said. “The cab is extremely comfortable. It’s like being in a Cadillac compared to older stuff. It also has a lot of creature comforts you can set and adjust yourself to how you perform in the machine, and it gives you versatility to a less experienced guy or a more experienced guy, and what you’re comfortable with.”

Strategically partnering with the dealer

Tasman and CASE dealer Titan Machinery have built a reliable partnership that helps the company’s earthmoving division stay on top of their equipment’s operating status, service and maintenance. One way they achieve this is through joint telematics monitoring to ensure all equipment is maintained properly while maximizing uptime. The company has granted Titan visibility into its CASE SiteWatch telematics program to help the dealer proactively address service issues, scheduled or otherwise.

“Titan has always responded really quick with any needs we have. We have a lot of things that aren’t planned for in our scope of work, it’s constantly changing, and Titan has always kept us at the front end of everything to where they do everything in their power to keep us on schedule and keep us running.”

“The telematics services is one of the biggest things we deal with every day,” Palmer said. “It could factor in massive losses or it can help with huge gains. The more we run the equipment is the more money we make, so Titan’s remote link to keep an eye on the machines works great for us.”