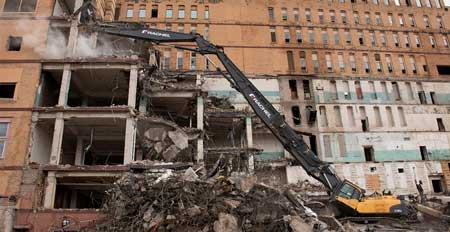 St. Paul, one half of Minnesota’s twin cities rose from the steep bluffs where the Mississippi and Minnesota rivers collide. Once a quiet frontier trading post, the city was soon transformed into an industrial hub. The transition sprouted new enterprises, such as West Publishing Company, which today remains the nation’s largest producer of academic and law books.

The lawless also flocked to the city. As described by infamous gangster Al Karpis: “If you were looking for a guy you hadn’t seen for a few months, you usually thought of two places: prison or St. Paul.” Fellow outlaws, such as Baby Face Nelson and Machine Gun Kelly, notoriously used the natural caves tunneling under the city as hideouts.

The former West Publishing complex, built in 1886, and the Ramsey County Adult Detention Center (ADC), built in 1979, occupied three blocks in downtown St. Paul. The local landmarks became disused when West Publishing relocated to the suburbs. The city strained for urban housing, but potential buyers balked the risks of developing such large structures. Instead, the council voted to demolish the vacant complex, market the site and recoup the costs from future income from the new development, projected at $150 million. When the bidding process was complete, Rachel Contracting, based in St. Michael, Minnesota, was awarded the $15 million, 94,666 square yards (852,000 sq ft) demolition contract.

Building on the bluff

Established in 2006, Rachel Contracting specializes in earthwork, demolition, utilities and specialty contracting. “We take the jobs that are unusual, the projects others don’t want,” says CEO Don Rachel.

Work began in November 2015 on the 10-story, seven-building complex. The job covered a variety of applications – from asbestos abatement and excavation, and total demolition to bluff stabilization and erecting a cast-in-place concrete retaining wall along Kellogg Boulevard, a main road in the city’s center.

“The first step was to abate all hazardous materials, including asbestos,” says Nick Bartemio, project manager for Rachel Contracting, adding that more asbestos was uncovered than initially anticipated by the pre-engineering studies. Before any exterior demolition could begin in earnest, bluff stabilization was required to shore up the back wall facing Kellogg Boulevard. Rachel completed this by drilling 5,486 linear meters (18,000 ft) of grouted rock bolt anchors into the face of the bluff. After demolition is completed, Rachel Contracting will build a 457-609 mm (18-24 in) thick retaining wall using 2,777 square yards (25,000 sq ft) of cast-in-place concrete along Kellogg Boulevard.

The height of the structure, plus the location of the site lent itself to being one of the most challenging demolition projects in the history of Rachel Contracting. “The site sits between a main downtown artery and is nine meters (30 ft) from an active rail line on the Mississippi River-facing side,” says Mark Kraemer, vice president of field operations for Rachel Contracting.

“We knew going into the bid that we could not bring it down by explosives, so the only option was to use a high reach demolition excavator,” Kraemer adds. “We looked at competing brands, but we felt more comfortable going with the Volvo. The support from local dealer Nuss Truck & Equipment was a big factor in our decision. We had a short lead time, and Nuss was able to provide the machine very quickly and were on site for set-up and training our operators.”

“The high reach allows us to bring this job down in a much more controlled fashion. On a building like this, with thick concrete columns wrapped around steel I-beams, we can cut through them with the shear without jeopardizing the safety of the building, pedestrians and vehicular traffic,” says Randy Shultz, general demolition superintendent at Rachel Contracting. Reinforced concrete slabs range in size up to 304 mm (12 in) in thickness.

The EC700CHR high reach excavator’s added value is its ability to convert to a standard excavator efficiently. The Volvo-patented modular joint design, located in front of the boom cylinders has a self-aligning, hydraulic push-pull pin system that makes changing the boom swift and simple. These features contribute to one less machine on site and keep the EC700CHR from becoming idle.

The high reach boom is converted to a standard boom every two to three days and is paired with a Genesis DemoPro 900 for concrete cleanup. “The conversion enables the machine to work with a 5.4 tonne (12,000 lb) attachment and use at work heights of18-20 meters (60-65 ft),” says Kraemer. “That height level is our bread-and-butter here in the Midwest. We have it down to less than an hour with two people. Volvo did an excellent job making this machine come apart and reassemble easily.”

Rachel Contracting also uses a Genesis GDR 300 demolition recycler and LXP® 300 Logix Processor fitted on three 36 tonne (80,000 lb) excavators for sorting and processing. Over 85 percent of the compound is being recycled and left on site. All concrete is crushed for base or backfill. The steel and ferrous, and non-ferrous metals are recycled and the remainder sent to the landfill.

The work, which was completed in laTE 2017 demonstrated the power of innovation and a tactical approach, developed by Don Rachel and partners Jerry Rachel, Mark Kraemer and Matt Coz. “We went from zero to $100 million in projects over 10 years, and today we have over 220 employees,” says Rachel.

Rachel owes his success to the right employees and equipment. “This is a very large job in our market and intrigued us for a lot of different reasons, including the history and the challenge of the bluffs. The demo portion is typical for us, but the anchor tie-ins under the city and retaining wall were unusual.” Unusual, but not out of scope, as Rachel Contracting has an entire division devoted to earthwork, soil remediation and stabilization.