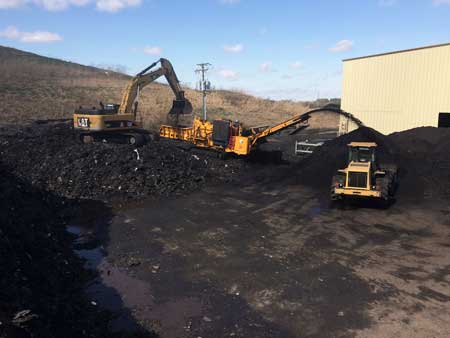 Selling asphalt producers on including RAS (recycled asphalt shingles) in their mixes can be a challenge. Plenty of would-be RAS suppliers have opted to try other ventures — enter Bryan Conley.

Bryan Conley is a knowledgeable, personable newcomer to the RAS supply market in Virginia, a state not known for widespread use of RAS in asphalt. He appears poised to have an excellent chance of business growth and success. An environmental civil engineer, Conley and a partner have acquired a C&D landfill in Chesapeake, VA and also bought out another Virginia RAS producer. Frustrated by the grinder repairs necessitated by the abrasiveness of asphalt shingles, the former RAS producer decided to grind wood for mulch instead.

Conley realized at the outset the importance of purchasing a purpose-built shingle grinder. “We looked at a number of manufacturers,” Conley explained. “We wanted a machine that would be easy to work on, and CBI excelled. With shingle grinding, there will be a lot of maintenance needed.” After considerable time spent comparing machines, Conley took a 5-year lease with option to purchase on a CBI 5800.

Conley, operating as Dominion Recycling Center, has been dedicated to properly maintaining his new grinder from the outset. “The CBI guy said, ‘Do this every three hours. Do this every morning,’ so that’s just what we do. When the grinder needs maintenance, we just shut down and do it. There’s no way around it. We have our own welding equipment and a worker who is a mechanic can weld. Another worker is a trained operator. So far, our CBI has been doing very well, except for a few factory-related sensor problems.” The company took care of those promptly.

Conley continued, “We always thought shingle grinding would be a good side business for our landfill, and that we could sell other asphalt producers on using RAS. That’s the trick. Getting people to try it. You’d think everyone would want to, since shingles have an AC (oil) content of 20 to 25 percent, considerably higher than RAP.”

The main problem in finding new customers for RAS, Conley believes, is that the asphalt producers all have large backlogs of RAP taking up space in their yards, waiting to be used. The state of Virginia allows a maximum of 25 percent recycle in new asphalt mixes. Producers could use 20 percent RAP and 5 percent RAS (the maximum RAS allowed), but since they’re clogged with RAP from past milling and asphalt removal jobs, it is simpler to use 25 percent RAP to use up their own stock of material.

“What they’re not looking at,” continued Conley, “is that they can save roughly $4.00 a ton for every ton of hot mix asphalt that they produce by using the 5 percent RAS with 20 percent RAP, assuming liquid asphalt prices of about $400 per ton. If they produce 200,000 tons of hot mix asphalt in their plant per year, they could save $800,000 a year on liquid asphalt costs because of the high AC content of the shingles. That’s our selling point in Virginia. Using RAS can save producers a lot of money.”

A recent change in Virginia state regulations on the use of recycle however, should be a big help in moving out all those stockpiles of RAP. “Virginia regulations are starting to allow the use of RAP on roadway subbases as an alternative to buying virgin rock. RAP makes a superior road base for several reasons,” added Conley.

The I-64 widening project, now reaching Conley’s area in southern Virginia is being constructed using an 18-inch layer of mostly RAP along with fine stone aggregate combined with foamed asphalt and cement. Made using a mobile mixer, 18 inches of this material tops the recycled concrete drainage layer of the roadway. The process is called Cold Central Plant Recycling, or CCPR.

“From what I understand, this ongoing project will be using up large enough quantities of RAP to consume the backlog piled in producers’ yards over a wide area, and the contractors will still need more,” noted Conley

With their backlogs of RAP gone, asphalt producers will more likely consider using RAS in their HMA mixes. “If they like it, once they realize the cost savings of around $4.00 a ton on every ton of asphalt they produce, likely they will continue to include RAS in their mixes.”

Will there be enough shingles available to satisfy the potential demand for RAS? Conley’s reply was quick and sure. “We can always get more shingles.” Conley currently receives roll offs full of shingles (with debris) from local roofers. Roll off rental companies drop off containers from roofing jobs. One environmentally conscious landfill owner in northern Virginia near Washington DC, Matt Jenkins of Rainwater Concrete, has been sending five semi loads a week to Conley in Chesapeake, and “could send five times that number.” Jenkins hates to dump the oil and other potential raw materials the shingles contain into his landfill, where the shingles don’t break down. Since tipping fees are higher in Jenkins’ area, he can truck the shingles the 400-mile, 8-hour round trip and still make a profit.

“We currently accept about 25,000 tons of shingles per year,” continued Conley, “and hope to increase that to 40,000 tons in the next several years as we increase the number of end users we supply.” Other area companies have been calling about dropping off shingles, including a large roofing company currently negotiating to drop off trailer loads of cleaned shingles.

Cleaned shingles — there’s the rub! Clean shingles can be dropped off for a lower tipping fee than the jumble of shingles, roofing paper, metal, plastic and wood that result from a typical roof tear-off. Shingles cannot be ground into RAS until they have been separated from the trash, and cleaning shingles is not a “super fun job,” as Conley puts it. Retaining workers to clean shingles can be a problem.

As one former RAS producer put it, “I felt like I was running a mini daycare with the shingle cleaning. Even when everyone showed up, it was difficult to keep the work moving efficiently.”

Conley has successfully cleared this hurdle. Over time he has collected a group of eight dependable full-time workers. Fortunately, with a crew this size, shingle cleaning can be rotated with other jobs at the landfill, keeping work more varied and interesting. “I pay them well, give them a lot of hours to make the job attractive and provide plenty of protective gear for shingle handling.” An ice machine and coffee pot are appreciated perks.

Shingle cleaning is done out of the sun, inside a large metal building, and conveyors keep the sorting work at a comfortable height.

“Unfortunately, it’s much simpler for roofing contractors, and costs them less for labor, to throw torn- off shingles and trash into one bin to drop off here,” commented Conley.

Once the shingles have been separated, Conley uses a CAT 345 to dump them into his grinder, equipped with a shingle package. The machine has a small footprint, which helps Conley to fit the shingle grinding operation into the permitted space of his landfill. “The CBI 5800 can grind 110 tons of shingles an hour,” Conley stated. “The unit has a cross belt magnet on the discharge end to remove nails.”

As a last step, the ground shingles are run through a Vermeer 521 trommel with 3/8-inch screens “to ensure the desired consistent size for asphalt mixes, which resembles coffee grounds.”

The Vermeer 521 trommel is a mid-sized, high production machine with extremely low fuel consumption. The operator can dial in the desired engine speed using his remote. The chain drive design allows a direct transfer of horsepower to the drum.

Screen change-outs are quick. Two workers simply loosen and then later tighten three bolts. Only Vermeer offers “tensioned” screens, similar to a tennis racket, which give longer screen wear with less damage. Family-owned Vermeer builds their machinery in South Dakota. The software is designed and built in-house, not outsourced. “If there is an issue, we can go back to the factory,” explained Steve Zaicko, mid-Atlantic sales.

Conley has been moving a steady 100 to 200 tons of RAS a day early in the season to several established customers in North Carolina. Trucking is not a problem. “The company hires trucks from a designated trucker to pick up and deliver the RAS.”

One Virginia asphalt plant, after collecting and running samples of Conley’s RAS, has developed their own mix designs using RAS. After slight modifications to their plant, they will start accepting material. Another Virginia company has picked up samples for testing. Hopefully more will start using RAS as their RAP stockpiles move out.

“North Carolina has regulations on using RAS that are slightly more restrictive than Virginia’s, but when one large construction company with a lot of asphalt plants started using RAS, soon RAS use snowballed. I believe the same thing could happen in our part of Virginia,” Conley concluded.

Conley’s relatively young RAS operation is well equipped and well positioned for such a possibility.