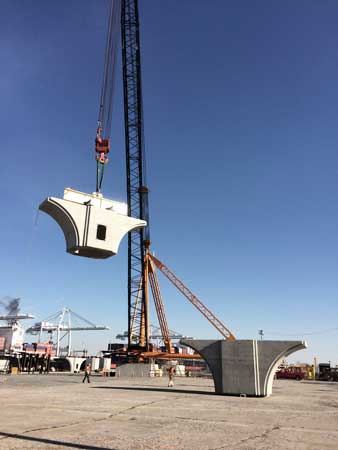 The American model S-60 stiffleg derrick may be an old boy in the lifting world, but it can still out-perform many newer crane models. The unit, supplied by industrial equipment sales and rental company, F&M Mafco, is unloading pre-cast concrete bridge segments from barges onto a dockside storage facility. The segments, weighing up to 130 tons each, are produced in Virginia and shipped by barge to New Jersey for storage, before being transported to the required spot on the bridge and associated roads.

The American model S-60 stiffleg unit is used in conjunction with an American 550 3 drum hoist that operates the derrick.

“The storage yard was limited on space and the portion closest to the water couldn’t take much weight and was largely unstable,” said Bobby McKenna, project manager for hoists and derricks at F&M Mafco. “The derrick’s capacity with a longer radius than a standard crane, coupled with its small footprint made it an ideal fit for this project. It has been on rent since March 2014 and other than standard maintenance, has had zero hours of downtime.”

F&M Mafco, based near Cincinnati, Ohio, was founded in 1945 and sells, rents, repairs and reconditions tools and equipment. It specializes in heavy rigging packages, cranes, on-site tooling, welding systems and other industrial items. The company was involved in the bidding process for the Bayonne Bridge project with a couple of joint ventures, with alternate methods for completing the project in using the equipment in different ways. The winning bid was by the joint venture of Skanska Koch Kiewit.

The Bayonne Bridge is a road crossing that links Staten Island with New Jersey. The bridge deck has been raised 64 feet to accommodate much bigger ships; the shipping lane was also dredged to create a deeper canal. Large cargo ships, of up to 18,000 TEU (20ft equivalent unit) will be able to pass under the bridge to reach container ports.

The Bayonne Bridge was originally built in 1931 and ships carrying up to 5,000 TEU have sailed underneath. Due to modern requirements for increased transportation of industrial and consumer goods, much larger vessels are now in operation — the largest of which are described as ‘post-panamax’ as they can travel through the Panama Canal. The bridge has been raised from 151ft to 215ft. The $1.5 billion project was initially announced in 2010; and port terminal operators, the port authority and the federal government have spent several billion dollars more on upgrades to the whole surrounding transport infrastructure. Larger ships will make the transportation of cargo more economical, and the goods can then be sent by road or rail across the northeast and mid-west of the U.S. and to Canada.

The Bayonne Bridge project has been described as a ‘game-changer’ in that the bridge was kept operational while the elevation was being carried out. The bridge is in operation but is not expected to be fully completed until 2019.

“It truly is an engineering marvel,” said Steve Plate, chief of the Major Capital Projects for the Port Authority of New York and New Jersey, during a broadcast when a 14,000 TEU capacity ship passed underneath. “This is the first time an operation of this kind has been done — operating a bridge while you’re rebuilding a bridge. It’s like performing open-heart surgery on a runner as he’s running his marathon.”

The strongman of the lifting world

The American model S-60 stiffleg derrick has a maximum capacity of 400 tons at its closest radius. “With a 200ft boom, it can actually pick up 104 tons at a radius of 210ft,” said McKenna. “The boom sits out a bit from the center line of rotation, so it can pick a bit farther than its actual boom length.”

At a radius of 24.4m and (80ft), the S-60 has a greater lift capacity than many newer cranes at the same radius. The S-60 can pick up 247 metric tons, while modern crawler hydraulic cranes are less impressive in lifting only 80-174 tons.