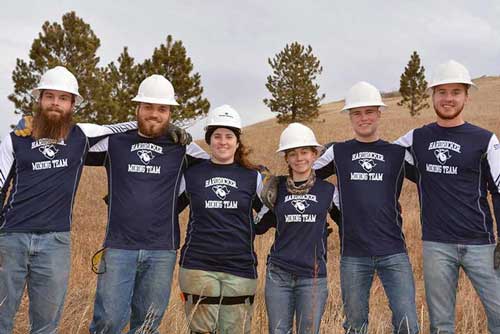 The mining games incorporate historical mining methods and practices, many of which were employed in the western United states during the gold rush years. Skills demonstrated at the annual games include operating a pneumatic drill called a jackleg, a hammer-and-chisel type drill called a single jack or hand steel and the swede saw, commonly called the bow saw; mucking, which is also known as shoveling, plus mine surveying, gold panning and track standing which requires contestants to erect a section of railroad track. Some examples of the above activities can be found on the team’s Facebook page.

The International Collegiate Mining Games also serve to commemorate fallen miners. The first games were held in 1978 to honor 91 miners who died in the 1972 Sunshine Mine Fire in Kellogg, Idaho.

SD Mines enters the competition after a strong finish in the 2017 games, where the coed team placed first in the hand steel competition and fifth overall. The men’s team placed first in mucking and fourth overall. Members of the Mining and Mucking team come from across campus and work closely with members of the SD Mines Department of Mining Engineering and Management, which is among the top programs in the United States. At SD Mines, students receive hands-on experience with industry-grade equipment, management training, and the opportunity to survey and work underground with officials at the Sanford Underground Research Facility. Mining engineering and management students also train with professional mine rescue teams, intern at major companies across the mining industry, and interact with a wide variety of national and international mining experts.