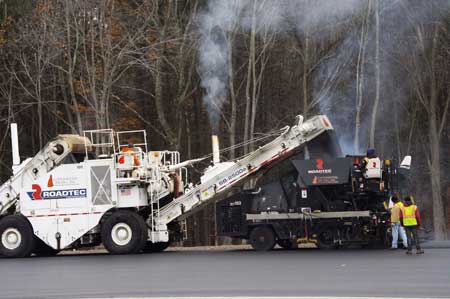 It may sound a bit over-the-top dramatic, but the New Hampshire Department of Transportation (NHDOT) proclaims that the widening of a 20-mile segment of I-93 between Exits 1 and 5 from the Massachusetts state line to Manchester, NH is one of the most ambitious projects that it has ever undertaken.

Clearly, I-93 is one of the state’s principal arterials and is considered critical to the economic vitality of the state, region and local communities. The roadwork to be performed is akin to brain surgery. There’s a lot at stake and no room for any screw ups.

The gist of the major road project is that I-93 will be rebuilt and widened from two- to four-lanes.

According to NHDOT, “The main element of the improvement involves widening I-93 from the existing limited access two-lane highway in each direction to a limited access four-lane highway in each direction from Salem, NH at the Massachusetts/New Hampshire state line heading northerly through Salem, Windham, Derry and Londonderry, and into Manchester, ending at the I-93/I-293 interchange.”

The $750 million project was started in 2008 and is anticipated to be completed by the end of 2019. The first phases of the project focused on clearing and grubbing the land adjacent to the interstate to accommodate the additional lanes. Moreover, there was the construction of bridges, on and off ramps, and park-and-ride facilities.

“We’ve joined the Rebuilding I-93 project at its final phase where we’ll be completing the asphalt paving on the remaining 12 miles of the project,” stated Amy Charbonneau, Continental Paving, Inc. of Londonderry, NH. “We are the subcontractor on four separate contracts with three general contractors. The GCs are Audley Construction out of Bow, NH; Weaver Brothers Construction, based in Bow, NH; and Coleman Construction from North Conway, NH.”

With 300 to 350 employees, Continental Paving serves the New Hampshire market offering commercial and industrial site development, asphalt paving and is a wholesaler for asphalt mix and aggregates.

The Rebuilding I-93 contracts do not cover the entire 20-mile segment being rehabbed. These are the last four big contracts in order to complete the entire widening of I-93 and cover the range from mile 7 to mile 19.

“Following the terms of our agreements, we are available to work for all of the contractors at the same time based on their needs and what they have ready,” Charbonneau said. “We’ll be building temporary bypasses, lane swaps and what works for them to keep the big picture moving forward.”

The first two contracts of the job site are for Audley Construction and are located on the southern section of the project. On these jobs, Continental Paving’s contract includes some reclaiming, milling, onsite crushing and the asphalt paving. The first Audley contract calls for approximately 140,000 ton of asphalt. The total contract for Audley as a GC is valued at $49 million dollars with a completion date of October 2019.

“We have used our Roadtec Stealth Paver with a Carlson screed for 90 percent of the work on the project, and when it wasn’t being used it was the Roadtec RP-190e rubber tire asphalt paver with the same MOBA-Matic II grade and slope leveling system on the machine,” Charbonneau said. “The highway through all four contracts is being reconstructed from the base up and we plan on paving the entire main line portion from gravel up with the Stealth Paver.”

The Roadtec RP-100e Stealth Paver is designed to be a low-maintenance gravity-fed paver specifically for operating with a material transfer vehicle. Continental Paving uses a Roadtec SB-2500e Shuttle Buggy material transfer vehicle with a 25-ton capacity to pair up with its Stealth Paver. The Shuttle Buggy stores and transfers hot-mixed asphalt material from a truck to a paver for continuous paving. A patented anti-segregation auger remixes materials in the MTV just before they are delivered to the asphalt paver.

Charbonneau believes the benefits of the gravity-fed paver are tangible: “We do not track fuel costs per paver, but we see that the Stealth is saving on fuel cost and the paver is going to save us approximately 50 percent in wear part replacement cost on a yearly basis, due to the reduced number of moving parts on the machine itself.”

The second contract with Audley Construction has a $62 million value and requires placement of 116,000 tons of asphalt and a completion date of September 2020. As with all the contracts, Continental is paving from the gravel up.

“Our paving calls for the placement of three lifts of HMA to reach the finished surface,” stated Charbonneau. “There are different mix combinations in different sections, to help the state test paved surface longevity. “

“After first using the Stealth Paver on a turnpike mill, fill and overlay in the previous season, we knew its capabilities on the smaller mix designs, but we were interested in seeing if it could perform as well on the 1¼-inch base and also to see if it would rid our mat of any segregation problems that we were having with the bigger base designs,” Charbonneau said. “The machine met our hopes on all accounts. We have previously received in the .96 to .99 pay factor with a conventional paver, and with the Stealth on the I-93 project we are currently receiving a maximum pay factor in the 1.02 to 1.05 range. We were able to achieve near perfect compaction numbers also.”

Charbonneau added, “We have found that the Stealth paver lays a consistent mat at a higher than average feet-per-minute (with great compaction numbers) than with other pavers we use.”

With a 90-foot-per-minute paving pace, Continental was able to achieve a record night using the Roadtec RP-100e Stealth Paver. The machine placed 4,100 tons of asphalt at 1¼-inch by morning during an 11-hour shift for the paving crew.

The third contract job for the contractor is for Weaver Brothers Construction. On their site, Continental Paving will be milling and paving. The total contract awarded to Weaver Brothers was for $34 million and consists of approximately 88,000 tons of asphalt with a completion date of August 2019.

The fourth contract for Continental Paving requires milling and paving also. The total contract awarded to Continental is $45.9 million and calls for approximately 115,000 tons of asphalt with a completion date of October 2019.

Throughout all four of the Continental Paving contracts a variety of pieces of equipment will be used. A Roadtec SX-8e soil stabillizer-reclaimer machine was tested when the contractor had to reclaim a section of the existing highway, which required a 12-18” cutting depth.

A half-lane Roadtec RX700e milling machine was used principally for transitional tie-ins and shoulder slope adjustments for lane shifts. The cold planer also plays a major role when bringing the lanes of traffic back from their shifts and swaps while making the surface ready and smooth for the top coat of asphalt. The highway is being reconstructed from gravel up so there are not any major sections for Continental to be milled before paving, but on some of the sections where removal of existing highway was the goal, the company did mill off a majority of the asphalt to return to their main location for use as RAP in new asphalt production.

The whole NHDOT widening of the 20-mile segment of I-93 project was started eight years ago and these Continental Paving contracts are the last piece of the puzzle. The rehab and widening of this major highway was considered much needed for the state.

Jeff Winke is a business and construction writer based in Milwaukee, WI. He can be reached through jeff_winke@yahoo.com.