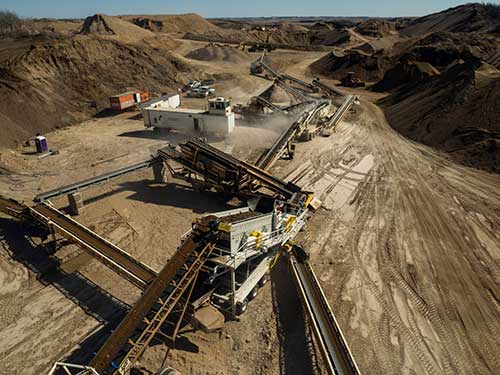 What does an operation do when its profits are buried in millions of tons of sand and its equipment needs to be portable enough to move on a moment’s notice? Figuring that out is a daily task at Lonesome Prairie Sand & Gravel, a 35-year-old aggregates company in Canada.

The mountains of sand are especially troublesome for the company’s operation in Big Boy Quarry, Wakaw, Saskatchewan — one of five pits the company owns. The quarry is unique in that it is far deeper than most pits. The average quarry in the region drops 10- to 30-feet. Big Boy is more than 100-feet-deep. Profits are a challenge because though crews sift through more than a million tons of material every year, only about 200,000 to 300,000 tons is sellable aggregates for concrete and asphalt. In most circumstances, the quarry would also sell the sand, but because they are too far from large sand-buying markets, they are only able to sell about 50,000 tons a year, severely limiting profitability.

The site is in western Canada, where pits are generally non-sustainable and gravel is becoming harder and harder to find, meaning most aggregates operations must use portable equipment so they can quickly move to the next job. A single Lonesome Prairie crew could operate in as many as 15 to 20 pits per year, spending anywhere from two weeks to two months in a single spot, so it’s important that they’re able to set up, take down and transport everything in as little time as possible.

Lonesome Prairie had been using two portable vibrating screens in the Wakaw location, but the equipment wasn’t holding up to conditions, causing decreased performance and productivity. The sandy environment required screening equipment that not only produced maximum amounts of sellable rock, but also stood up to blinding and surging to eliminate material contamination. The existing machines regularly bogged down, leading to sand going through the crushers and contaminating the sellable material, resulting in wasted product and lost profit. In order to maximize yields, the operation used screen media with opening sizes as large as seven, eight and nine millimeters and overloaded the screens with as much as 5,000 tons of material a day. The larger opening sizes meant smaller rock — about five to eight percent of the sellable rock was falling through with the sand the operation considers waste material. The issue cost Lonesome Prairie about $200 an hour in production losses.

The larger openings were a quick fix for the material surges as well as blinding problems exacerbated by weather. Regular rain, frost and snow dampen the sand, contributing to material clumping together and blinding screen media.

Production rates and lost revenue were only compounded by increased maintenance costs. The sand caused the vibrating screens to wear quickly and require nearly continuous replacement of screen media. Crews needed to change screen media every two weeks, resulting in two to three hours of downtime and 1,000 to 1,500 tons of lost production for each change-out.

“The many issues were frustrating for our crew and our customers,” said Henry Derksen, Lonesome Prairie Sand & Gravel operations manager. “Contamination meant our material wasn’t as clean as it should be and we were concerned the issues would drive away our buyers. Production amounts were also not as high as we wanted them to be. We were tired of throwing away rock, so we began looking for a solution.”

Lonesome Prairie management approached Hikon Industries, an equipment manufacturer and supplier they work with regularly. They explained what they were looking for: A user-friendly, portable vibrating screen that would meet production requirements and be manufactured out of as many modular components as possible to allow for inexpensive repair.

Lonesome Prairie provided their desired tons-per-hour, gradation samples and other specifications, and Hikon started looking for a vibrating screen to match. They talked to several manufacturers, including Haver & Boecker, a company they worked with in the past and knew had a reputation of building high-quality equipment and listening to customers’ needs. They were also aware of the company’s Tyler F-Class vibrating screen, which features an advanced double-eccentric shaft design, supported by four high-performance, double-spherical roller bearings. The technology minimizes structural vibrations and delivers a consistent stroke, virtually eliminating surging, blinding, pegging and material contamination. Hikon and Haver & Boecker agreed to work together and started to design a Tyler F-Class portable plant.

“There are quite a few off-the-shelf portable vibrating screens out there,” said David Hildebrandt, Hikon Industries president. “They’re often less expensive to purchase, but rarely fine-tuned to an individual pit. The customization we do to match each application is important to achieve the highest levels of productivity and profitability.”

Hikon custom-built the chassis around the 6- by 20-foot, three-deck F-Class. Haver & Boecker engineers factored in the desired tonnage and the material that Lonesome Prairie processes to determine what the machine’s stroke should be, the speed and general mounting guidelines. Hikon took feedback from the aggregates company, including adding a specially sized jaw crusher on the chassis. Lonesome Prairie also asked that the bottom deck of the vibrating screen be end-tensioned. In the company’s operation, the design results in longer lasting screen media and 30 percent more productivity than side-tensioned machines. Haver & Boecker customized the machine for Lonesome Prairie’s specific needs. When the engineering design was in place, both manufacturers got to work.

The finished system was inclined rather than horizontal like many portable systems, allowing for a higher production capacity. The machine included a hydraulic system to lift and position the vibrating screen at the optimal angle. The F-Class utilizes a base frame that attaches to the chassis. Crews use the hydraulic system to set up the portable vibrating screen in less than 30 minutes, with the entire plant — including conveyors and other peripheral equipment — taking about half a day. The same task can take around two weeks for fixed equipment — a length of time Derksen said could mean a loss of about $300,000 in production during the busy season for a 24/7 operation.

The F-Class portable plant arrived at Big Boy Quarry in April, 2016 and Lonesome Prairie began testing immediately. They were skeptical of the results the manufacturers had promised, thinking it was too good to be true, especially considering the warm, dry weather during initial testing. Doubts vanished when they found the single vibrating screen increased aggregates production by about 25 percent, even as rain came and went. The improved screening action allowed the operation to maintain needed production rates while using screen media with an open area of about four millimeters, preventing waste of the smaller sellable material the company lost while using larger open area screens.

“Price can be a problem in western Canada because our competitive market often calls for cheaper equipment that fit the budget. But despite the higher price tag, I have no doubts we’re improving profits with this machine,” Derksen said. “We couldn’t believe our eyes; bad weather didn’t even phase it. People don’t believe us when we tell them our costs are so far down and we’re getting more productivity out of one 6-by-20-foot vibrating screen than the 6-by-20-foot and 6-by-16-foot units we were using before.”

Derksen said the two prior units together produced about 400 tph but were plagued with problems that often resulted in wasted or contaminated material. The F-Class virtually eliminated blinding and maintained consistent g-force during surging. This boosted material processing to 500 tph, including about 300 to 350 tph of sand with the rest being clean, sellable material. The new machine also dramatically reduced maintenance and contamination problems.

Screen media change-outs went from every two weeks to every six weeks — saving the operation $10,000 a month. Replacement times on the end-tensioned bottom deck — which requires the most change-outs — dropped from two to three hours each screen media change-out to only a half an hour. Replacement times for the top two decks stayed about the same. Derksen said Haver & Boecker technicians helped choose the best screen media combination for his application, which has helped improve wear-life and reduce contamination. He also attributed reduced change-outs to the F-Class deck’s engineering, saying it spreads material better than other machines. In addition, Derksen said Haver & Boecker technicians followed up with Pulse Vibration Analysis on the F-Class to ensure the machine was running to factory specifications.

“We’re always looking for ways to improve our customers’ profits and productivity,” said Steven Cwiak, Haver & Boecker certified sales manager. “Whether it involves working with another company on a custom vibrating screen, helping choose the best screen media for a job or solving maintenance challenges, we’ll never shy away from finding the best solution for our customers.”

The F-Class portable plant will stay at Big Boy for some time unless they encounter similar sand and productivity problems elsewhere. Looking ahead, given the success Derksen has seen, he anticipates a fast ROI. He said he now knows who to call to solve unique problems preventing his operation from getting the most out of mountains of sand.