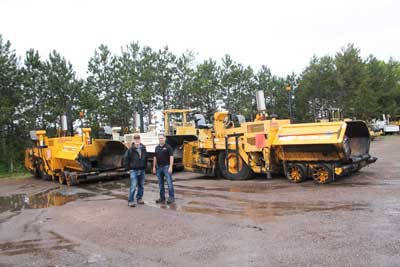 While RAP is a widely used ingredient in new asphalt mixes, the use of Reclaimed Asphalt Shingles (RAS) can pose problems for the asphalt producer. Far too many ripped asphalt shingles end up in landfills, instead of becoming a valuable resource for new asphalt mixes. RAS contains a significant amount of asphalt, averaging around 20 percent, reducing the need for new AC, and is a source for sand and fiberglass fibers, which some believe strengthens the asphalt made with them.

Some asphalt producers have successfully worked through the difficulties of using RAS, which with care, are not insurmountable. Senn Blacktop in Chippewa Falls, WI is one such producer. Wisconsin approved the use of RAS in 1999, and Senn Blacktop jumped in on the “ground floor,” working with the DNR and area roofers in the early 2000’s to solve RAS’s inherent problems. RAS is abrasive to grind and difficult to size accurately. Once ground, it tends to become sticky and clump together in summer heat, and to compact if piled, stymying loading and conveying in the asphalt plant. Ground shingles also tend to absorb moisture when exposed to rain. Drying that moisture can consume extra fuel.

Father and son, Steven and Darrin Senn, co-owners of Senn Blacktop at that time, put a lot of time and thought into solving the problems posed by RAS. Both were committed to using recycled materials as much as possible, and they stuck with the job until they got it right.

When we visited the company in May of 2017, their RAS that was ready for use in their own asphalt plant, far from being clumped and sticky and containing off-size pieces, was as friable as good garden soil, a most impressive achievement. “It takes a lot of money to get it to that state,” commented Darrin, now owner and President, “but it is worth it. It’s the only way to get the RAS through the asphalt plant without problems.” As we watched him sift handfuls of RAS through his fingers, it had the appearance of garden loam.

The Senns arrived at their process in a series of steps. One of the most important was the choice of a purpose-built asphalt shingle grinder. The Senns chose a Rotochopper, and have been very pleased with its ability to handle and to accurately and consistently size (to 3/8 inch minus), the tough, abrasive material.

“The paving crew didn’t like it at all,” commented Steven, “when they found little pieces of shingle —little chunks that were not powdered — from our previous grinder showing up in the asphalt. They said, ‘This just doesn’t work.’” Now, with the Rotochopper, this is no longer a problem.

The Senns solved another piece of the RAS puzzle, its stickiness, by putting the ground RAS under roof, protected from the weather and heat of the sun. They also decided on a second step to minimize stickiness: they grind fresh RAS every two weeks, grinding only the amount they expect to use before the next grinding, rather than grinding a larger pile to last longer. The frequent grinding of fresh product is helpful, they have found.

Some asphalt producers avoid dealing with all the problems of preparing RAS by buying their RAS ready-to-use from a subcontractor. One such company, Southwind RAS, with many outlets for their RAS in Illinois, also now routinely stores their ground RAS under roof, using ClearSpan structures for this purpose. The use of under-roof storage for ground RAS helps cut down on both stickiness in the asphalt plant and water absorption, as more and more processors of RAS are discovering.

In addition, the Senns invest the time and labor to handle the RAS one more time before it is used in their asphalt plant. They load the freshly ground material and run it through their Terex Finlay 790 Single Screen Trommel, using a ¼-inch screen, then convey it under roof again for very brief storage before it is transported to its bin at their own asphalt plant on site. “We no longer have issues with clumping or bridging. The RAS meters smoothly onto the conveyors.”

Senn’s fully computerized, energy efficient, continuous flow asphalt drum plant, new in 2011, is designed for the use of recycle. “The covered conveyors for the RAS and the RAP enter the barrel at the collar so their asphalt content is not burned off.”

Darrin has solved another problem connected with the use of RAS and RAP, the potential stiffness and poor coating ability of the oxidized AC in these recycled materials. “I use various polymer enhanced binders and rejuvenators to soften the AC so it better coats and adheres to the induvial pieces of aggregate,” he explained.

“Making asphalt can be somewhat like chocolate milk. Milk with chunks of chocolate floating in it isn’t chocolate milk. It only becomes chocolate milk when the chocolate is liquefied and dispersed through the milk. With asphalt, the AC must become soft enough to coat each particle of aggregate and adhere to those particles,” explained Senn. This process is enhanced with the use of additives, which are metered automatically into the AC in Senn’s computerized asphalt plant.

Novak also frequently tests the amount of AC in RAS and RAP that will be used in mixes in their plant. This is necessary, because with RAS, the percentage of AC in the shingles can contribute to an asphalt mix varying from about 18 to as much as 25 percent — with an average of 20 percent.

To determine the AC content of a batch of torn off shingles, instead of using a more cumbersome chemical process, Novak simply weighs a dry sample, then puts the sample in their recent-manufacture NTO Troxler oven for about 20-30 minutes, during which time the oven’s radiant energy will burn off all the asphalt. Then he weighs the same sample a second time. It is not difficult to calculate, from the before and after weights, the percentage asphalt in the sampled shingles.

Novak also uses a Geotest compactor with a compressed cylinder of a given asphalt mix to check whether the mix will be susceptible to water infiltration and damage, and to determine the proper blends of aggregate and binder to complete the mix for its expected traffic level. It’s important that mix designs are able to resist rutting and fatigue under the expected traffic load, measured in ESALS.

In addition, Novak does a sieve analysis using a stacked set of screens in graduated sizes with a sample of dry aggregate in the top screen. The stacked screens are placed in a vibratory chamber to determine the size gradations of the aggregate. Then each screen’s contents are weighed. The distribution of aggregate particles sizes affects all the important properties in an asphalt mix, and is vital to good performance.

Performance Grade specifications appropriate for Wisconsin, depending on project type (number of ESALS), are 58 degrees C. and -28 (or -34 degrees C. in the northern asphalt zone of the state). These are the limits within which the binder is designed to retain rigidity and resist rutting at the upper edge of the temperature zone, and to retain sufficient flexibility to resist thermal cracking on the lower end.

Despite the fact that landfills in Chippewa County, WI charge a tipping fee to dispose of torn off asphalt shingles while Senn blacktop will accept them at no charge and recycle them, over 10,000 tons of these used shingles are dumped into Chippewa Valley landfills each year.

Senn Blacktop is working to change that. We can put to good use all the shingles we can get,” stated Senn, who views using recycled materials in asphalt as a “Win-win-win” mission. “The roofers who don’t have to pay tipping fees to the landfills can pass on the savings to homeowners. The RAS used in asphalt lowers the cost of the asphalt we sell, and makes it a stronger product. Diverted from landfills to a productive use, recycling the shingles leaves more space in landfills.

According to the 2016 Asphalt Pavement Industry Survey (the most recent currently available), RAS usage alone was estimated to have reduced the need for 1.5 million barrels of asphalt binder (oil) and nearly 695,000 tons of newly quarried aggregate.