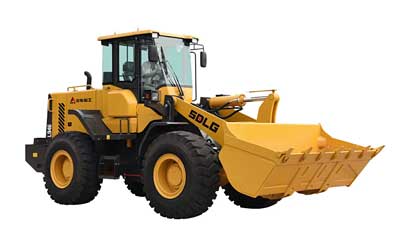 With high demand for smaller-capacity wheel loaders in India projected to continue, SDLG has added the compact L936 and LG946L to its product line.

The two new wheel loaders, already available in other Asia-Pacific markets, were displayed at SDLG’s outdoor booth 24 alongside the brand’s bestsellers — the LG958L wheel loader and the G9138 motor grader.

“Compact wheel loaders are becoming increasingly popular in India as customers start seeing the efficiency gains that they deliver for specific jobs — such as material handling, truck loading and stockpiling — over utilitarian ones like backhoe loaders,” said Sanu George, head of SDLG in India.

With the introduction of SDLG’s two smaller-capacity wheel loaders, customers now have more models to choose from in the 3-ton and 4-ton rated range to meet growing demand.

The L936L is the successor to the LG936L, which SDLG stopped selling in India earlier this year. “It’s a good time to launch these wheel loaders in India, especially with the government’s push for infrastructure development and road development,” George said. “SDLG manufactures reliable and simple-to-use machines, and we are confident these qualities will appeal to customers, allowing them to focus on getting the job done without fuss and hassle.”