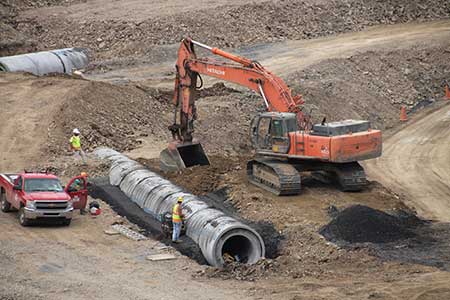 The north-central Pennsylvania location of a planned Route 15 bypass would not be any contractor’s choice. In the midst of the Appalachians, with the mountains and valleys folded close together, the terrain for the bypass is difficult, to say the least. The congested stretch happens to be the main route from central New York through central Pennsylvania and beyond as part of the interstate system. Although this bypass is less than 14 miles long, it is expected to cost about $670 million — which includes several bridges and Interchanges. Expected completion date is 2024.

In total, the bypass will require moving several million cubic yards of rock and earth. Preparation for building a section of the southern part of the bypass was complicated by the recent discovery that three miles of the proposed road would need to be rerouted to avoid two fly ash disposal sites. The fly ash, from coal burned nearby at the former electric utility PP&L, had been deposited in these sites for over 60 years, ending in the late 1990’s.

The fly ash was mixed with lime, made into slurry and piped to the disposal basins. The road planners did not expect problems. They began geotechnical studies in 2016, taking soil cores, studying ground water levels and doing chemical tests.

Even though both disposal sites had been capped with soil and revegetated almost two decades ago, the ground water level in both was so high that the fly ash never solidified as expected. The contents of the basins had the consistency of toothpaste or a milkshake and in some places were up to 100 feet deep. Removal of the soupy contents would have cost $500 million.

Seeing no way to engineer a highway on top of such a foundation, planners had to decide which of three alternative sites they could use for that section of the bypass. Then more land needed to be purchased by eminent domain, adding to the cost.

Meanwhile earth moving began in 2017 in the northern section of the bypass, including the Winfield area we visited. An impressive array of heavy machinery has been assembled, much of it manufactured by CAT. At this site, operators will be kept busy removing and leveling a significant portion of a weathered mountain, loading it into CAT 777Ds. The haul trucks will move the rock and earth across a temporary bridge to avoid traffic standstills on the busy Route 15 below, and dump it as fill into a gorge on the other side of the road.

It is a monumental task, but drivers of the 40,000-plus vehicles per day route — about 20 percent of them semis — will benefit greatly from the bypass. It will skirt around 24 intersections, nine traffic lights and over 100 driveways into homes and retailers, including a busy mall and several large shopping centers within the space of a few short miles. In fact, this bypass has been under consideration, with many studies and plans completed but never carried out, for over 40 years. The high price tag for site prep and road construction through difficult terrain could explain the long wait that has frustrated drivers for decades.

After the removal of trees and the scraping and hauling away of topsoil at the site, dirt roads were laid out on the mountain and compacted with a CAT 825G soil compactor. The temporary bridge installation last October was speedy because the concrete abutments had been precast. A pair of lattice boom crawler cranes lifted heavy steel beams in place and topped them with precast bridge deck sections. Crews worked mostly at night to minimize traffic disruption on Route 15.

Fortunately the weathered sedimentary rock making up the mountain is easily fractured, making the job of mountain moving less arduous than if it were more dense rock. Workers seeded grass to protect large areas of denuded slopes from erosion.

Temporary asphalt roadways were constructed so heavy machinery could move unimpeded beside Route 15. A line of dump trucks repeatedly filled two Ingersoll Rand pavers, which were followed by a CAT roller, as they laid the temporary asphalt. Down in the gorge where rock from the mountaintop would be dumped, a Hitachi Zaxis excavator prepared an area. A crew laid needed drain tiles, fixing them firmly in place with asphalt cold patch, which workers compacted and leveled with a hand-guided roller.

After the deep site prep had been completed in the gorge, the large, heavy-duty haul trucks rumbled over the temporary bridge and into the gorge, dumping their loads one by one.

Slowly, laboriously, the trucks and heavy machinery worked to prepare this particular site for the construction of an interchange. The interchange will make needed connections so future traffic can continue to flow smoothly onto the new bypass north of Lewisburg, PA and continue south heading to the state capital in Harrisburg and beyond.

Truckers, travelers and local motorists eagerly await the end of the current traffic bottleneck, scheduled for 2024.