Skip to content
A special offer for Pacific Northwest public works projects and municipalities looking to lower repaving costs and downtime while reducing impact on environment
PORTLAND, OR – RePLAY West, a subsidiary of Portland-based Coast Pavement Services, recently announced the kickoff of the RePLAY Pilot Project Initiative, a special offer and program for Pacific Northwest municipalities and public works departments who are seeking to reduce asphalt paving costs, downtime during repaving, and their environmental impact. 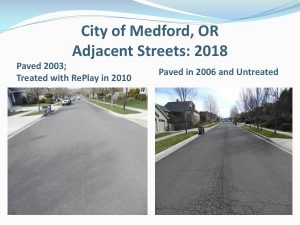 “Our Pilot Project Initiative is an economical way for municipalities to benefit from this nontoxic, biobased sealer that reduces both repaving costs and asphalt’s impact on the environment,” Coast President Ken VanDomelen said. “RePLAY has already significantly reduced paving costs for municipalities across the nation, including the Pacific Northwest.”
RePLAY is a biobased fog seal product formulated with soybean oil and recycled Styrofoam. It’s non-toxic and carbon negative and is quickly absorbed by asphalt, enabling traffic to resume in less than two hours after application, and in some cases as soon as 30 minutes after application. RePLAY goes on clear, precluding the need for restriping after application. Multiple independent studies confirm that RePLAY extends the useful life of asphalt 5-7 years per application.
The City of Medford, Oregon, the Port of Portland, the City of Lynnwood, WA, and municipalities throughout the Midwest—where harsh climate conditions significantly damage asphalt streets and roads—all have started using RePLAY on their publicly used roadways and arterials in recent years. 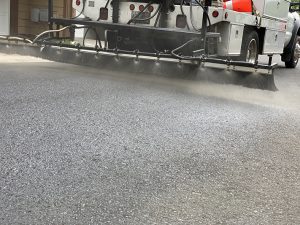 The RePLAY Pilot Project comprises the following (all performed by RePLAY West):
A life-cycle cost analysis using the state of Minnesota as a case study has shown RePLAY to be a financially viable bituminous surface treatment that public agencies can use to reduce maintenance costs of low-volume roads. And a 2019 study by Asphalt Technology News gave RePLAY an “A” grade when compared to other rejuvenating fog sealers.
To apply for RePLAY’s Pilot Project Initiative, visit https://replaywest.com/pilot-project/ or contact Cheron Calder at 503.320.8695 or Cheronc@coastpave.com.