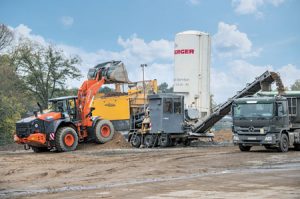 With the mobile KMA 220 mobile cold recycling mixing plant from Wirtgen, road construction materials can be recycled or upgraded in just about any location. This avoids countless transport trips and is also sustainable and environmentally friendly. And finally, it is extremely economical – as became clear from a job at Cologne/Bonn Airport at the end of 2017. There, the plant, located immediately next to the job site, produced around 11,000 t of materials for a hydraulically bound base layer, using materials reclaimed locally, water and cement in the mix-in-plant process.

In autumn 2017, parts of the flight operations areas at Cologne/Bonn Airport were renovated. In this context, parts of the drainage system – including both the unbound superstructure and parts of the substructure – were also rehabilitated. The mobile cold recycling mixing plant from Wirtgen prepared the material mix.

Alexander Weber of SAT Straßensanierung GmbH coordinated the deployment of the mobile KMA 220. “We use the cold mixing plant in projects across the country. In the last three months, for instance, it has been in Munich before going on to the Rhineland and then to two different locations in the Hunsrück region. This works outstandingly well, because the plant is very easy to transport and the setup times are very short.”

A new location usually also means a different formula, different mineral aggregates and different binders. But that’s not a problem for Weber, because the KMA 220 can produce a wide range of mixes from new aggregates, milled material or other reclaimed road surfacing materials in an environmentally friendly process. Cement, bitumen emulsion or foamed bitumen can be added in the plant as a binder.

One of the key factors in the cost-effectiveness of the plant is its simple, time-saving transportability. This was taken into account right from the design stage, when the transport dimensions were kept within the international guidelines for road traffic. Erection and dismantling are also straightforward, because the work can be done without any special tools and no foundations are required. Instead, a combination of fixed and hydraulically extending supports provides stability.

Additional components such as the tanker truck for water or emulsion and the cement auger can be positioned on either side of the plant. And, not least, the discharge conveyor has a wide slewing range in either direction. In short, there is enormous flexibility when it comes to choosing the location.

More than 15 years of satisfaction

Volkmar Gogol is the person at SAT who is responsible for setting up the KMA 220 and putting it into operation. He has been working with cold mixing plants from Wirtgen since as far back as 1990. “I worked with the KMA 150 first, then with its successor, the KMA 200, and now the KMA 220. Over the years, the plants have been continually optimized and made more efficient. Today, I can mix between 150 and 220 t per hour with the KMA 220, depending on the material used and the formula. That amounts to as much as 2,000 t in one working day,” the experienced operator explains.

The short route to 11,000 t of hydraulically bound base in six days

In six days, the mobile KMA 220 at Cologne/Bonn Airport turned some 11,000 t of recycled material into the hydraulically bound base required for a surface area of about 60 m x 600 m in the area of the taxiway. The material actually consisted of RAP from a variety of projects in the region and parts of the hydraulically bound base from a construction site neighboring the airport. To achieve the required strengths, 4.4 percent by volume of 32.5 R Portland cement and 1.2 percent by volume of water was added to the construction material. A total of six trucks transported the material from the KMA 220 straight to the installation site some 400 m away before shuttling back again.

Tried-and-tested measuring and control technology in the KMA 220 ensures that the formula is followed. The aggregate is weighed on belt scales while on the take-off conveyor and fed continuously to the mixer. The quantities of water and binder specified in the formula are determined by microprocessor control, based on the weight of the aggregate, and then dosed precisely and added by means of the pump and flow meter. They are added directly at the twin-shaft compulsory mixer, where mixing blades made of wear-resistant carbide metal mix all components thoroughly. The result was conclusive: Even after more than 3,500 hours of operation, the KMA 220 is still mixing the construction materials in accordance with the mix design test specifications.

The mixer, like all other components of the KMA 220, is operated hydraulically. The hydraulic pumps are driven by a powerful diesel engine delivering 129 kW (176 HP). The system saves a lot of energy: “I can mix for 10-15 hours on one tank of fuel,” says operator Gogol. The dimensions of the water tank are also impressive: Its capacity of 4,500 l supports a reliable supply of water even while the water tanker truck is being switched.

Thanks to the large tank capacities, the preparation of the hydraulically bound base at the Cologne/Bonn airport project also proceeded smoothly. This is confirmed by David Rose (M. Eng.), site Manager of general contractor Heinz Schnorpfeil Bau GmbH: “As a building contractor, we appreciate the benefits of the mix-in-plant process and the Wirtgen cold mixing plant. The plant keeps to the formula reliably and produces the desired quantities in the allotted time.” The KMA 220 continuously turned the recycled material into hydraulically bound base material that was then distributed over the surface of the site by a grader. A Hamm earth compactor, the H 16i, handled compaction.

By then Volkmar Gogol was already getting the KMA 220 ready for its journey to the next job site, around 150 km away in the Hunsrück. There, some 20,000 t of tar-polluted reclaimed material had to be processed in the following two weeks so that it could then be recycled economically for use in the rehabilitation of a country road.