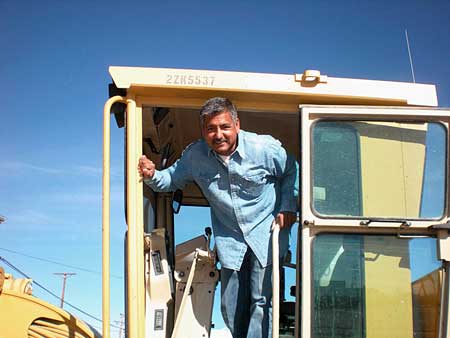 Regardless of industry, waste is one of the most detrimental and costly factors in a business. One New Mexico-based construction company was able to turn what used to be tons of waste into big profit with the help of a single crushing machine from IROCK. Ramirez & Sons, Inc. purchased the IROCK RDS-15 crusher less than a year ago, and has already seen the machine take lagging production rates to impressive new heights. And the company has grown its customer base and profits along the way.

Ramirez & Sons began as a general earthwork and construction company, serving a client base of both municipal and private contractors in Hobbs, Lovington and surrounding areas. Today, the company offers general excavation, site prep, highway paving, and both water and sewer utility work. In 2010, the company enhanced its capabilities even further with the addition of its first hot-mix asphalt plant. In addition to contracting services, Ramirez & Sons also sells material for use in hot-mix asphalt, building pads and as base layers for road building. This side of the business is led by Ken Smith, plant manager and crushing/hot mix superintendent.

“Historically, the company has been primarily involved in asphalt recycling,” he said. According to Smith, Ramirez & Sons had previously produced four different size materials: 3/4-inch, 3/8-inch, fines and base coarse. The company both sold the material and used it in its hot-mix plant for its own paving work. While asphalt recycling has certainly brought value to the company, Smith felt there was more material he could be offering, and that substantial money was being left on the table.

“We were wasting a lot of material,” said Smith. Because the company was only recycling asphalt, it was missing out on other saleable materials, particularly concrete. Recycled concrete and other aggregates can be utilized in many applications, and being able to provide high-quality material would potentially bring new customers to Ramirez & Sons. Not only that, he figured the company would be able to use the material in its own operation, cutting time and costs associated with outside material purchasing.

While the benefits were clear, Ramirez & Sons simply wasn’t in a position to make a move; the company’s crusher wasn’t able to process concrete and other aggregates.

Smith also noted that production rates weren’t as high as he felt they could be, coming in at a daily rate of roughly 120 TPH. The equipment should have been producing more, but there were a lot of issues with breakdowns and excessive downtime. Again, it wasn’t as simple as sheer output volume. End-product quality wasn’t up to par either, and a lot of potentially usable material was being left as waste. That all changed when Smith met with Ramirez & Sons’ longtime equipment dealer, Warren CAT, to explore new machines that could amp up production and allow the company to offer larger amounts of more saleable material.

A Solution That Rocked

Brian Hutchinson, Ramirez & Sons’ contact at Warren CAT, spoke with Smith to find out exactly what he was looking for in a new crusher. First, Hutchinson gained insight into Smith’s pain points with his existing crusher. Next, the two discussed Smith’s goals and expectations of the new machine – greater output, more processing capabilities and high uptime. After learning both, Hutchinson felt he had the solution – an IROCK crusher. He knew of one that was available at one of Warren’s sister locations in Odessa, Texas. The particular unit, IROCK’s RDS-15, was a four bar impactor, three-stage mobile crusher that could process a variety of materials, including concrete and other aggregates, at impressive tonnage rates that could double Smith’s hourly output. Smith made the trip south to take a look at the machine, and about 175 miles and a few days later, Smith said, “It was sitting in our yard.”

Smith has been operating the RDS-15 for less than a year, but already has seen production rates soar from about 120 TPH to approximately 300 TPH. While that’s more than double, and an impressive stat alone, the impact really adds up when looking at the bigger picture. In addition to sheer output quantity, the company also has been able to diversify its sales offerings from four products to nearly 15, including various sizes of recycled concrete, aggregates and asphalt.

“The machine has its own double-deck screen,” Smith explained. “I’m able to easily change out the bottom screen, which allows us to produce different sizes we hadn’t been able to with other machines.” Additionally, the configuration options enable Ramirez & Sons to produce three different materials at once, and the impact aprons are easy to adjust for precise sizing.

As Smith expected, Ramirez & Sons’ newfound diversity has opened up the company to a new customer base and more opportunity. Most notable is the oil boom happening in Hobbs and nearby cities. Several oil companies use Ramirez & Sons’ 3/4-inch minus material, primarily for parking lots and temporary roads.

While increased production rates and profits are both key, Smith says the primary benefit is zero. As in, zero waste.

Ramirez & Sons now offers a variety of material sizes, from 3/8-inch minus to 5/8-inch minus to 1-inch minus. The products are used in a variety of applications, including hot-mix, road base, subbase, and building pads. The company also produces specialty size material for specific applications. For example, a septic system’s base lines require a larger rock, from 1 to 3 inches in size. Smith says with just a simple adjustment his RDS-15 can produce it quickly and precisely.

Often overshadowed by the high production rates and lack of material waste is the simple reliability of the crusher. It’s not that Smith has ignored the high uptime; he certainly recognizes it. Rather, he hasn’t really had to pay attention. “It seems like you can always remember the times your equipment has failed on you,” he said. “On the flip side, when a machine runs smoothly and doesn’t require attention, it’s easy for it to go unnoticed. Ironically, it’s the machines that do their job and run like they’re supposed to that almost seem like they’re forgotten. But that’s really when you should be taking notice, and I credit the RDS-15 for its reliability.”

Maintenance requirements have been minimal and mostly routine items like keeping the machine lubricated, refuels and changing the oil. One unique feature that contributes to this is IROCK’s innovative ROCK BOX, an alternative to discharge chutes found on similar units. The ROCK BOX uses a shelf system with abrasion resistant wear bars that allow crushed material to build up and act as a wear liner, cutting down on costly wear liner replacement.

Smith also points out the minimal wear he has seen on the machine. Compared to crushers he has used in the past, IROCK’s machine has impressed him in terms of longevity of wear parts. He cites the blow bars as a prime example. Compared with other crushers he has had to change out the bars within four weeks. In more than 1,400 hours of operation with the RDS-15, he’s only had to rotate the bars once, and expects to get at least 700 or more hours out of them.

The RDS-15 has been a welcome addition to the Ramirez & Sons fleet. “I haven’t yet been able to accurately quantify our maintenance and downtime savings from the RDS-15, but I can tell you both have gone down sharply while production has more than doubled,” Smith said.