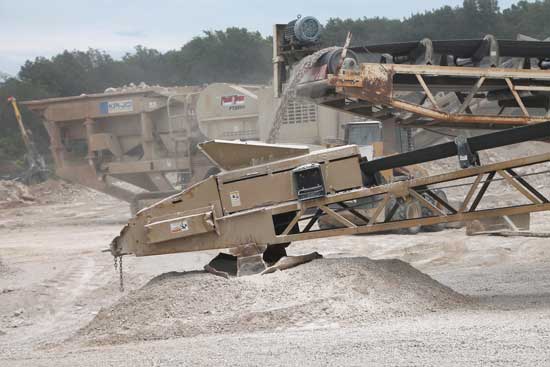 Jerome Trapp, owner and operator of Quality Aggregate LLC, has set up the kind of secure (although logistically very complex) business that most of us only dream about. Based in Green Lake, WI, Quality Aggregate has 15 steady customers for his crushed clear stone, road gravel, aggregate for asphalt, road base rock, fines and crushed recycle. As long as road stone is needed and cement and asphalt continue to be made, he will have work for his company.

“We custom-crush for pit owners. [Trapp himself owns 3 pits.] We sell it right out of the pit and customers truck it for us,” said Trapp.

At Quality Aggregate’s quarry near Oakfield, WI, leased from Eden Stone Co., Trapp said, “We’ll be working here for 25 years until we have our job finished.” Trapp’s job at Oakfield is to blast, crush, and truck away the top 30 feet of rock from the 40-acre parcel. That will take the quarry down to a level where Eden Stone’s 1¼-inch diameter test cores have shown the company can begin to remove high quality dolomitic limestone building stone and landscape stone. Building stone from the Oakfield area has a popular but unusual “distressed” or “weathered” appearance, and has sold well for Eden Stone from other nearby quarries.

The only problem at this particular Oakfield location had been that the “distressed” pattern in the top 30 feet of rock, over the whole 40 acres, was not attractive and so could not be sold as building stone. It all needed to be removed to get down to “the good stuff.” Trapp and his crushing crews are hard at work to take care of that problem.

“We have one acre of the quarry down 30 feet,” he explained. “Eden Stone has already started pumping out water there with a Gorman-Rupp pump. As we expand that area over the next couple of years, Eden Stone will start quarrying behind us.”

Trapp’s mobile spread at the Oakfield Quarry depends on CAT loaders and excavators. “All but two of my nine loaders, and both my 330 C excavators, are CATS,” he noted. “The 980G CAT loaders don’t require downtime for repairs. They can take the punishment of handling a lot of weight day after day, and are very dependable.” A John Deere and a Liebherr 580 2T2 loader fill out his roster of loading equipment.

Trapp’s primary crusher at Oakfield is a powerful KPI JCI jaw, FT 2650. With its 26×50-inch opening, it can handle large scoops of multi-sized rock served up by the CATS. This primary jaw comes with several options that Trapp has found to be useful. It has a side discharge conveyor for material that has already been crushed to size. “There’s no point in running already sized material through the rest of the system,” commented Trapp. His Fast Track 2650 also includes the optional cross belt magnet and the 1½ inch stroke, giving the machine a 25 percent larger throughput than most other primary jaws in its class because of the larger jaw movement.

The hydraulic wedge CSS adjustment, holding the jaw in place and moving it in and out, “makes the difference between spending only 30 seconds or spending half an hour in making jaw adjustments.” With his optional 2½-inch grizzly spacing, “I can control more rock with the settings of the jaw.”

As we watched, this huge tracked, self-propelled machine weighing 97,000 pounds, lumbered forward to the desired position — an impressive sight — after hydraulically unfolding its conveyor so that it would connect with the conveyor to the secondary, a KPI JCI 440 cone crusher.

The Kafka Conveyor coming off the side of the secondary, which conveyed 2-inch minus was linked horizontally with conveyors by Superior and KPI JCI. This 2-inch minus rock was conveyed to a free-standing CedarRapids screen, separating the 2-inch minus into ¾-inch road gravel and 1½-inch road stone. The fines, which were screened on the secondary KPI JCI’s built-in 100-square foot Astec screen were flowing rapidly from the conveyor and had to be repeatedly scooped up by a CAT 980G or Liebherr 580 2T2 loader to make space for more fines running off the conveyor.

“I have markets for all the fines I can get,” noted Trapp. “Customers buy them to use in concrete, for under garage slabs, for top-dressing gravel driveways, and for biking paths. I only have wash plants for clear stone at two locations,” he continued. “In those locations, the rock is very sandy.” However, the large concrete company he supplies with aggregate has several wash plants of its own, covering a wide area, and Trapp also crushes clear stone that is washed there, in ¾ and 1¼-inch sizes.

Much of the rock used in asphalt comes from three quarries in the Upper Peninsula portion of Michigan, near Rockland, where the rock is hard black granite. At the time of this writing, in mid-October, all three of Trapp’s mobile spreads were working in quarries in Michigan’s Upper Peninsula, where, in addition to black granite, he also quarries gravel and sand. Quality Aggregate also crushes recycle, both asphalt paving from his road contractors and chunks of broken concrete, collected on-site by his largest customer for clear stone. For crushing recycle, Trapp again favors KPI JCI equipment, but in this case, he uses a totally self-contained horizontal impact crusher, a 4250 Impactor with built-in Astec screens.

Although Quality Aggregate’s crews do crush aggregate year-round, in Michigan’s Upper Peninsula quarrying becomes impossible after mid- to late November. The sand and gravel associated with much of the black granite in the U.P. eventually freezes hard, and will stay frozen through the long northern winters.

Before freeze-up comes, all Trapp’s mobile spreads will be moved out of the U.P., to spend the winter working in southern Wisconsin, where quarrying can continue without a let-up. Trapp and his crew of 11, which includes his son Matt, all hustle. They are not the type to be content spending their winters with their feet propped up.

“This year we expect to crush about 1.2 million tons of rock,” said Trapp. “We bought our third mobile spread this year. Last year we crushed about a million tons. With only 1 mobile spread in 2011, when I started this business, we crushed 650,000 tons.” (Trapp had previous experience in the industry in the early 1990’s, owned 3 quarries by 2011, and had been running a consulting business which gave him a lot of industry contacts.)

By this time, readers may be getting a sense of the logistical complexities of running a company like Quality Aggregate. Trapp’s mobile spreads move back and forth as needed over about a 250 mile distance, from southern Wisconsin to Ontonagon in Michigan’s U.P, and as far to the north and west as Hurley, WI, where Trapp crushes aggregate, sand and gravel at another black granite quarry.

“It can take eight to nine semis to move a mobile spread,” Trapp continued. “If I moved all the machines myself, it could take me 8 days. Instead, I call in a trucking company, Cons Trucks, out of Stevens Point,” WI. ConsTrucks specializes in heavy hauls on lowboy trailers. “They send me eight semis. We load everything. They can move us 200 miles away, and we can be started crushing again at the new location that same day.”

ConsTrucks gets a lot of business from Trapp. He moves one or another of his mobile spreads 26 or 27 times in a season. Somehow, Trapp stays on top of the whereabouts and current condition of each piece of machinery, the amount of material crushed and any problems that need to be solved at each location. Although some days he operates a crusher, Trapp puts a lot of miles on his pickup driving from one mobile spread to another.

This time of year, though, with all his crews and machines in the U.P, he is “camped out” at night in a motel for the duration of the quarrying season there, until sand and gravel freeze hard and all quarrying comes to a halt in the U.P for the rest of the winter. Lights are needed for part of each workday in these far-northern quarries by this time of year and Trapp supplies lighting, using an Ingersoll-Rand Lightsource Light Tower system.

Later in November, Trapp will truck all his machinery into his winter quarry locations in southern Wisconsin, where it will stay put until road restrictions are lifted in spring. “We blast and crush, blast and crush,” he explained. “We hire blasting contractors from three different companies, depending on where we’re located. In southern Wisconsin, our contractor drills and blasts for us straight through the winter.”