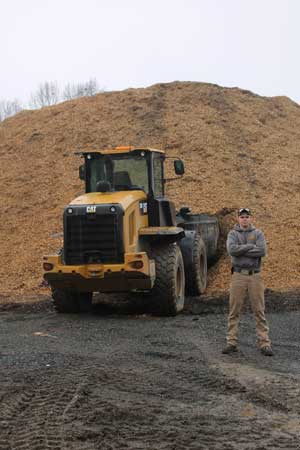 Originally established in 1974 by Dave and Helen Shelton, the second and third generations of the Shelton family in Oxford, PA are currently running a highly successful business based on distributing repaired pallets, building specialty-sized pallets and plant racks, and selling mulch from recycled pallets. The pallets are mainly purchased via Shelton Pallet’s satellite location at the Port of Wilmington in Delaware. The pallets arrive on ships and are sold after the cargo is offloaded.

“There’s a lot of competition for the skids,” explained Lisa Shelton, wife of second generation Chuck Shelton, “but we pay attractive prices, so we are able to purchase the loads we want.” After a 40-mile ride from the Port of Wilmington to Shelton’s Oxford, PA base of operations, workers sort the skids. Those that are in good condition are trucked to the Shelton’s customer base.

Workers also separate skids that can either be repaired or contain solid wood that can be used to rebuild skids in their well-equipped shop. “These are skilled workers,” explained Lisa. “One of our highly skilled workers, who has been with us for many years, is faster than any machine at building skids.”

The badly broken skids end up on a pile some distance from the shop. Those will be ground into mulch and colored — some red, brown and black. Most of their current clientele are landscapers. Shelton’s Pallet is presently advertising for homeowners to stop in to pick up loads of mulch hoping to expand their customer base. They also offer delivery within a certain radius. Lisa added, “Offering good customer service is very important to us.”

The mulch business is the unexpected result of state regulation changes in the late 90’s — specifically, no more open wood waste burning. With Chuck’s hard work, that regulation has turned into a real blessing.

Shelton’s Pallet Co. purchased the machinery needed to grind the mulch and developed a stable customer base for their mulch products. Since then, mulch sales have become an important part of the business.

Mulch production is currently run by third generation Aaron Shelton, a recent graduate of the Universal Technical Institute. Aaron recently joined the business after learning all aspects of it “from the ground up” by watching and helping his dad and grandfather as he was growing up. The operation uses a Geith Excavator Products grapple that both crushes the skids and loads them into the Toro 5000 Tub Grinder, using their Hitachi Zaxis excavator.

The Toro, literally “beats itself to death” running at 22,000 rpm and has not needed many repairs recently. “Although even when we’re grinding skids made from soft pine wood, with a little soil or stones mixed in, the Toro needs to have a tooth re-welded every two or three work days to extend the time between actual tooth replacements,” explained Aaron. The frequent re-welding is a time-consuming job. Aaron is assisted in the servicing, maintenance and repair of all the heavy equipment and the dump truck by two other mechanics.

When they originally purchased the Toro tub grinder, Chuck asked a local Amishman to devise a lid for it to prevent high velocity wood throwing. The Amishman obliged, and made a lid that sits down about two inches into the tub that prevents most of the flying wood, according to Aaron. The lid was a simple solution to a common and potentially hazardous problem.

Aaron and Chuck prefer CAT™ equipment. “We’ve found over the years that they are very dependable machines,” explained Aaron. Their Toro tub grinder and the McCloskey 621 trommel have CAT powerplants. “We replaced the transmission in the older CAT loader at 14,000 hours; 2,000 hours later, the loader has not needed further repairs.” The recently purchased CAT 930K wheel loader has the lowest fuel consumption in its class, and also has the desirable extended servicing and filter changing schedule.

An original magnet at the base of the Toro tub grinder’s conveyor captures nails, which end up in a bin to be sold for scrap metal. “I’ve never come across a nail in our mulch,” Aaron commented.

Aaron’s colored mulch production is a one-man job, using a system that is a bit unusual, but is also efficient and effective. Chuck originally invented this procedure back in 2007. He pre-sets the small Mulch Color Jet™ from TH Glennon to mix the correct amount of colorant and water to produce the desired shade and then injects it into the trommel, which has been wrapped with plastic skid wrap to make it waterproof. As the trommel turns, the colorant/water mixture is dispersed throughout the mulch until it has reached a uniform color. It is then conveyed to concrete bins.

“We use T.H. Glennon colorant for several reasons,” explained Chuck. “We like to make use of good weather in late fall and early winter to grind mulch ahead for early spring deliveries. Sometimes we are still grinding in early December. Because of our humid climate, mulch sometimes developed moldy spots, spoiling its appearance.

“We learned that T.H. Glennon supplied a colorant containing a mold and fungus inhibitor to prevent this problem. T.H. Glennon’s colorant also keeps the colors bright for longer periods. We have been using exclusively T.H. Glennon’s EPA approved ‘Colorfast’ ever since — for about 17 years. Over the winter, we make a point of turning the mulch occasionally to aerate it.”

Making colored mulch takes a lot of water. The Shelton’s water source is a water retention pond on site that catches rainwater runoff from their hilly land. “The water is pumped into an underground storage through a screen which keeps out sticks and leaves,” commented Aaron.

“It is basically clean water. Stored underground, the pond water is pumped into above-ground storage as needed, and from there, to the Mulch Color Injector™ for mixing with colorant.”

In 2015, Chuck’s wife Lisa was literally “drafted” into the business due to the loss of Chuck’s mother Helen. Because the business had been growing rapidly, Lisa’s business degree and her administrative experience made her the ideal person to streamline the office work at the increasingly complex business.

“Chuck’s Aunt Linda [Weaver] helped me,” added Lisa. “Linda had worked in the business for 20 years, and knew most of basic office protocol. The company was all new to me, and I couldn’t have done it without her help.”

In short order, Lisa hired professional advisors in IT, law, and accounting. The new team of professionals helped them make rapid changes — including changing to an S Corp format. In January of 2016 Lisa registered with SAM (System for Award Management — www.sam.gov) so the company would be eligible to bid on government contracts. She also set up a system for credit card processing and computerized all the office operations. Shelton’s website is coming soon: SheltonsPallet.com

“To facilitate bidding on government contracts,” added Lisa, “we recently signed up for a special program in which, for a small fee per month, a company watches for contracts that would apply to our products and helps us to get the opportunity to possibly bid on government jobs. We originally signed up with SAM three years ago and have been selling skids to HHS in Maryland. With this new program, we hope to increase our sales to the federal government.”

Lisa’s innovative work earned her a place in the “Continental Who’s Who”. She was also inducted into the 2017 VP Woman of the Year Circle.

The company is continually looking for new products to enlarge its customer base. Chuck, for example, visits companies having difficulty palletizing their products for secure trucking. If a company needs an unusual size pallet, Shelton’s wood working crew will custom-build them. During our visit, the workshop was busy constructing small custom pallets at great speed to meet a special order of 1340 pallets.

Other custom services include nursery pot racks and top frames for increased inventory stacking. Lisa stated, “A business that does not continue to grow, diversify and adapt will die.”

By finding new services and products to offer to their existing customers and to attract potential new customers, the Sheltons are making sure that the third generation company will survive for the long term. “Everyone wants the ease of ordering with the click of a mouse or on their smart phones. My ultimate goal is that our family business stays up to date with today’s technology, and makes it easy for our customers to obtain our products and experience our loyal customer service.”