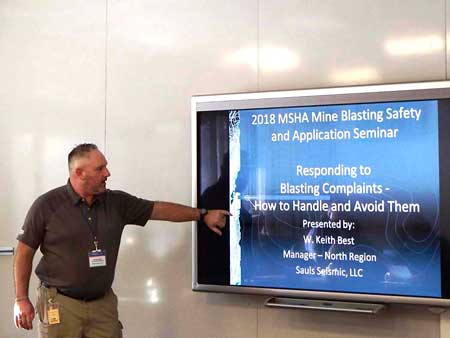 How to respond to, handle and avoid blasting complaints is always something to consider when going about blasting projects, whether they be in quarry applications or at construction sites. According to representatives from Sauls Seismic, LLC and the law firm of Montgomery, Rennie & Jonson, there are a number of items to consider before and after blasting as a way to handle most problems that might arise. These ideas were presented at the 2018 Mine Blasting Safety and Application seminar Jan. 17 and 18 at the MSHA Academy in Beckley, WV.

Jeffrey Taylor, president of Sauls Seismic, LLC said that one of the best ways to help prevent blasting complaints is to fully implement a site-specific blast plan that includes the blasters, supervisors, and helpers. The planning should consider production issues and neighboring properties. Planners should recognize that conditions change with every shot. Setting a safe blast area for each blast is also very important. He said internal limits on peak particle velocity (PPV) and air blast levels should be considered at 50 percent of the legal limits or below. Blasters need to predict the PPV of every blast since flyrock damage is a primary source of complaints.

Ralph Burnham, an attorney for Montgomery, Rennie & Jonson who specializes in blasting litigation, said another important tool is a pre-blast / existing condition survey. Some states might require it, but he recommends it irrespective of what the law requires.

He said that a third party survey company is the best resource for this part of the blast project. Ultimately, taking a survey beyond the minimum required distance for the blast and doing the survey in a timely manner, is important.

Common causes of flyrock include excessive explosives, voids or mud seams, loading into or too close to cracked holes, and insufficient burden. Other causes can include improper delays on blast timing, blast hole deviation, improper hole placement and lack of communication. These are all reasons to enlarge the secured blast area during a blast.

High-risk projects like blasting around schools, hospitals, government buildings, or those in close proximity to populated areas need to be given special attention. These tend to generate more potential claimants. Not surprisingly, local awareness increases the chances of complaints after a blast.

Burnham said, “When you are drafting your site-specific blast plan, you need to do your homework. Accumulating the background research that is necessary in this community will help prepare you. Not only will you look at the geology, but there are other considerations as well. You need to know the local politics, the previous opposition to the project, were there previous companies that were working on the project that had a bad reputation in the community or had a previous incident that has created a “hornet’s nest” for your company.”

“A good way to head this off is to have a proactive community relations program,” he said. “One way to implement this is to send out introductory letters. Another is to host community meetings. The independent third-party pre-blast survey is a good way to initiate this process. Having them as good listeners when they are out doing the survey can be extremely helpful.”

Taylor added that there are new technologies that can work together with good planning to help reduce post blast incidents. Equipment such as electronic detonators, signature hole analysis giving site-specific timing and 2-D or 3-D laser profiling work, will help give good engineering specifications for a perfect ratio of explosives to rock mass.

Crack displacement monitors are another helpful tool. Attorney Kelly Ratliff, also representing Montgomery, Rennie & Jonson, gave an example where work near an older school provided an opportunity for the school to file a claim against a contractor. Since the blaster used monitors, he had the recorded data from the crack displacement monitors. This provided a true picture of what took place and the school dropped the claim. “Had we not had that information, there would have been no way we could have convinced them to drop the claim,” he said.

Ratliff said the shot reports should be completed as soon as possible after a shot. The report should be finished before the blaster leaves the jobsite, if possible. The blaster should focus on providing a complete, accurate and legible document. A second-party review of the shot reports, whether in-house or by computer, would also be helpful. “Corrections should be made immediately,” he emphasized.

Third party seismic monitoring is also desirable. This eliminates the “fox guarding the henhouse” perception. The data can be provided quickly and stored indefinitely. Following the ISEE Field Practice Guidelines to Installation of Seismographs should not be underestimated.

“In the end, challenge the claim,” said Ratliff. “Do not ignore the complaint. In some states, there are laws that provide for punitive damages if it looks like the blaster is not taking the claim seriously. A complete and integrated complaint handling and documentation process is important. A team approach that allows management, employees and contractors to consistently promote and follow proper methods and procedures is the best way to minimize problems.”

Earlier in the day, Keith Best, north regional manager for Sauls Seismic, LLC, talked about ways to handle complaints that are bound to come in. He said the tendency for the media to often portray blasting and construction in a negative light tends to fuel the public reaction to drilling and blasting. He mentioned that social media is currently a hotbed of activity; bloggers who claim to be experts fuel the fire of opposition to drilling and blasting, whether in quarries or at surface projects like roads and site prep work.

Clearly, community relations is vitally important when drilling and blasting takes place. Best presented a tongue-in-cheek list of the top ten reasons why a company needs a community relations person. Some of his satirical reasons included:
• You can’t see your plant through the dust
• You give directions to your plant by telling people to follow the rock dust tracked on the road
• The local news has assigned you a permanent reporter

Best outlined some basic questions to ask when a complaint comes in to a company. “Ask for their name, address and phone number. Ask for the exact date and time of blast. Ask the complainant to describe the blast and ask them to describe what happened when the blast went off. Did the china rattle?” he asked. “A blasting complaint can be based on concern over noise or vibration and may not directly or immediately indicate property damage.”

“There are guidelines for speaking to the media,” he said. “Establish one person for your company and refer all calls to that person. Have the call receptionist take a message and ask the nature of the call. Find out what they want to know [so that the contact person] can prepare an answer.”

“Do not let the media intimidate you,” he said. “Always have positive points to make. Never repeat negative words in your answer.”

He said whenever speaking to the media, there are basic guidelines to follow. These include keeping the answers short, not rambling, remain in control (don’t show anger) and don’t be afraid to say, “I do not know, but I will check and find you an answer.”

The spokesperson should have a general understanding of blasting. They should have a detailed knowledge of company operations. They would need good oral and written skills and the ability to relate in a non-confrontational manner. An understanding of the general liability insurance policy would also be helpful. “They also should have the authority to order a seismograph reading or contact an outside blasting/vibration consultant,” he said.

While ground vibration is an important component of how blasting affects the surrounding area, air overpressure is perhaps the hardest element of the blasting operation to control. “I never say it is an air blast,” he said. “It is an air pressure pulse.”

This pressure wave results from four basic characteristics of blasting operations. These include the air pressure pulse from the movement of broken rock, which displaces the air. It also includes the gas release pulse when gasses pass through the broken rock and into the air. Additionally, the stemming release pulse, when the blast pressure is released up through the stemming, and the rock pressure pulse, the vertical component of the ground surface moving as the seismic wave approaches a structure, are components as well.

“Most of the blast is noise, but the air pressure wave can cause the damage,” he said. “Most complaints are from the air pressure. It’s hard to explain that to a homeowner. Much of the recording is done in decibel levels and not in pounds per square inch.”

“Join civic organizations,” he advised. “Sponsor local sports teams. Get to know local civic leaders and politicians. Ask to speak at homeowner meetings. Offer an open house/customer appreciation day, school field trips and one-on-one visits with residents in the area.” By being prepared, drilling and blasting companies can have the confidence and assurance that they are doing the best job possible. For more information, contact Sauls Seismic, LLC at 866•527•2477 or visit their website at www.saulsseismic.com.