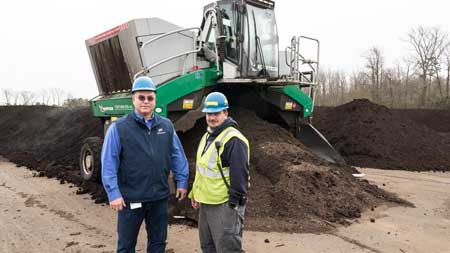 Perdue AgriRecycle, the company’s composting facility, opened in January 2017 in Blades, DE. Encompassing 26 acres with an initial capital investment of more than $12.5 million. That investment was carefully made after more than five years of study by Perdue. Perdue purchased highly effective, energy efficient compost handling machinery from Komptech and follows the best scientific methods. Perdue fully composts its raw material, not once — but twice, to ensure that all pathogens are killed by exposure to the natural heat of composting temperatures exceeding 131 degrees Fahrenheit.

Although the company began producing compost less than 18 months ago, they are already selling 50-pound bags of compost to garden centers, and truckloads to landscapers, golf courses, highway contractors (for tree planting) and crop farmers.

Perdue’s composting begins indoors, where filters can contain odors. In the mixing room, a CAT 920M mixes the 100 percent sustainable ingredients of chicken litter, hatchery waste (the egg shells impart 6 percent calcium to their compost), poultry processing by-products and wood chips. The wood chips are mostly pine — from virgin wood — delivered by foresters in Delmarva who replant the areas they harvest. “Pine wood is absorbent like peat,” commented Scott Raubenstine, vice president of ag services at Perdue Agribusiness, “but unlike peat, pine is a renewable resource.”

The ingredients in Perdue’s compost do not vary under Perdue’s control. “We are not opportunistic composters,” noted Joe Forsthoffer, director of corporate communications for Purdue, “so we’re able to produce a consistent and clean compost.”

The amount of wood chips added to the compost is carefully measured according to Perdue’s recipe to maximize the carbon/nitrogen ratio for speedy heating of the mixture. Some additional coarse wood chips are added to allow space for air movement through the pile. These are later screened out. The friendly aerobic bacteria doing the actual work of breaking down the raw materials need plenty of oxygen.

Once mixed, the compost-to-be is moved outside to concrete bunkers and quickly covered with specially woven organic tarps. The tarps keep the odors inside the bunkers, but keep rainwater out and allow the outward movement of carbon dioxide. Under the tarps a steady supply of ambient air flows through the compost from perforated pipes on the bottom of each bunker. The ingredients can naturally heat to pathogen-killing levels quickly — “within 24 hours,” explained Raubenstine . “With the aerobic bacteria providing the heat from the breakdown of the organic matter, it’s like a little oven in there. We can adjust the air speed to cool or to further heat the bunker contents. The bunkers have permanent temperature sensors hooked up to Wi-Fi.”

Most composters would consider the compost “finished” and ready to sell after it met the required time at pathogen-killing temperatures (according to US Composting Council Standards). Not Perdue. After the first composting is completed, the finished compost — now free of the offensive odors of its ingredients and friable like loamy soil — is moved to long windrows in the open air and undergoes a second extended period of heating to pathogen-killing temperatures.

“In the windrows, the compost is turned at least fivetimes with a sharp bladed Komptech X55 Topturn windrower that effectively pulverizes the material into a potting soil-like texture,” explained Raubenstine. The Komptech Topturn’s curved blades efficiently move the hot material from the center of the pile to the outside, while moving the cooler outside material to the center to be subject to pathogen-killing heat again.

The action of the friendly bacteria can slow at temperatures above 170 degrees, so the windrow operator can apply well water from a 4-inch diameter hose attachment as he turns the compost. This water keeps the temperature within a good range for the hard-working bacteria and also restores moisture that has been lost to evaporation.

In the windrows, workers regularly check and record the temperature, oxygen and moisture levels at five different locations per windrow to assure effective composting.

After the second extended heating to pathogen-killing temperatures, the compost is screened through a Komptech L3 Multi Star to remove the larger wood chips, which will be reused.

“The compost is then either sent out for bagging in 50-pound bags or is kept on an asphalt staging pad ready to fill orders. The pad — which holds 2000 tons — is carefully designed so nutrients are contained and cannot escape into the ground water. “We spent several million on storm water management, an important part of receiving our permit to operate,” noted Forsthoffer. “While it’s on the pad, we continuously monitor the compost, turning it frequently.” It is trucked to customers in loads ranging from 10-ton dump trucks to 22-ton semis with walking floors.

A lab certified by the US Composting Council regularly tests samples of compost. “We test for maturity and stability of nutrients, soluble salts, inert ingredients — such as metals or plastics, moisture content, pH, the carbon to nitrogen ratio and the presence of 11 different heavy metals, among other things. There are more than 20 parameters we must meet before the compost can be marketed,” explained Raubenstine. Because the same ingredients are used in each batch, the results of the lab tests don’t vary much. “Because of our clean ingredients, our inerts are under 0.01.” The results are published on the US Composting Council’s website.

The compost is popular as a soil amendment for a number of reasons in addition to the slow-release nitrogen and phosphorus it provides. “Compost improves soil structure,” explained Raubenstine. “It helps to break up heavy clay soils, and in sandy soils, compost increases the cation exchange rate and adds valuable organic matter to the soil. The humus-like compost absorbs and holds water,” and is high in organic activity valuable to crop growth, feeding beneficial microbes and fungi that bind together the soil aggregates and thereby help to prevent erosion

“About 12 to 15 percent of the compost we sell is sold into organic crop production and is Organic Material Review Institution [OMRI] certified,” stated Forsthoffer.

The composting process, which produces its own heat, reduces the bulk of the composted materials about the same amount as the former flash heating and pelletizing process did. A ton of raw material is reduced to a weight of about 1100 pounds, making it more economical to truck to end users outside the Chesapeake Bay Watershed.

About 15 years ago, Perdue company leaders foresaw the coming necessity to have alternative uses for nutrient-rich by-products and to help protect the water quality of the Bay. “Currently, after an expenditure of over $80 million over the last 15 years — first on R&D for flash heating, which was then considered state of the art — and then for composting, we have handled 2.8 billion pounds of poultry litter at our recycling facility. About 50 percent of the nutrients in the litter are now trucked beyond the confines of that watershed,” noted Forsthoffer.

“We wanted to make sure our family farms stay economically and environmentally sustainable for the long haul. We also wanted to make sure there was an alternative for farmers who could not use the litter on their own land to grow crops,” he concluded. 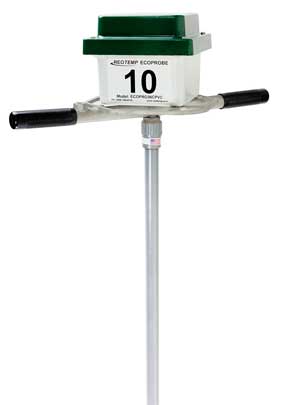 Perdue’s choice of equipment for monitoring the temperature in the covered bunkers, and the temperature, oxygen levels, and moisture in the windrows is American made, by REOTEMP. The covered concrete bunkers use REOTEMP’s Wireless Compost System, with permanent sensors hooked up to the computer by Wi-Fi. These durable, accurate sensors automatically monitor and record the internal temperatures of each of the compost bunkers at various depths, posting them to the computer once a day.
Because the windrows are regularly turned, permanent sensors cannot be used, so workers regularly check and record temperature, oxygen, and moisture levels at five different locations per windrow to assure effective composting, using a hand-held device, also manufactured by REOTEMP. REOTEMP’s EcoProbe ™ is accurate and easy to clean between samples. A single probe gives readings for both temperature and percent oxygen at each location.

Turning the Compost in the Windrows

Perdue chose Komptech X 55 Topturn for this job. The Komptech X55 Topturn is a third generation machine and, according to Komptech is one of the most widely used compost turners in the world. It makes short work of turning Perdue’s long windrows. “In our operation, its output is about 4000 m3/hr., depending on the material,” said Raubenstine.

Perdue screens their compost through a Komptech L3 Multi Star to remove the larger wood chips, which will be reused. This machine is able to maintain an exceptionally high throughput of 8.25 tons per hour because the screen is kept clear by the patented CLEANSTAR screen cleaning system. Each star has a wear-resistant cleaning element that cleans the screen gap to the surrounding stars on each rotation.

The Multi Star is also easy on energy costs. When using electricity from the grid, its effective drive quietly powers both the screen deck and the conveyor, reducing energy consumption up to 75 percent.