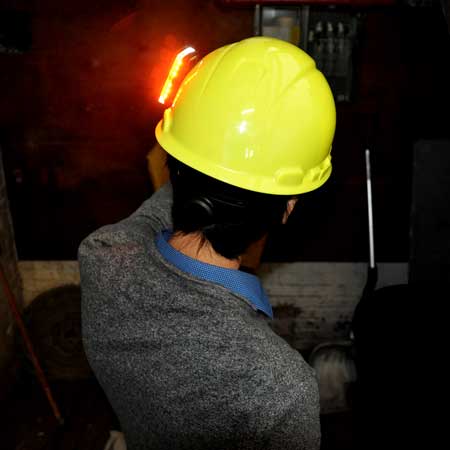 OSHA reports indicate that 16.8 percent of construction deaths are due to the combined hazards of being struck by an object and being pinned by machinery or equipment. Many of these deaths could have been prevented if the workers had been equipped with more advanced personal safety equipment that exceeded Class 3 Reflective Apparel regulations that dictate a 1,280-foot visibility distance. This is why Guardian Angel, the manufacturer of the world’s most versatile and durable personal safety light on the market today has relentlessly strived to make a safety product that is engineered to deliver unmatched multi-use performance under any condition and in any work setting. Despite other products solely focusing on the wearers’ ability to see in front of them, Guardian Angel has committed to putting human life in the forefront of everything they do by focusing on eliminating visibility-related concerns in all situations and on any job site. With every new model developed, Guardian Angel has constantly pushed the limits of personal safety lighting technology and design innovation: case in point, the new Elite Series devices.

“The Guardian Angel Device increases the odds that my tradesmen will be seen by both motorists and machine operators so they’re safer no matter what the job, whether it’s unloading a truck on a busy street or on a jobsite where moving equipment can pose a danger.” explained John Perkowski, Field Superintendent and Safety Director at ISC Contracting.
There’s more to visibility safety than just being able to be seen by machinery operators, and that’s why Guardian Angel partnered with construction teams and first responders in the field to engineer a device that boasts features that can save lives in virtually any scenario:

• Powerful LED that can be seen for up to two miles (8x more than required by Class 3 apparel regulations):
Construction professionals are trained to incorporate the latest safety measures into their everyday work scenario. On the other hand, the average person driving past a roadside site is not. From texting and driving to simply “zoning out” on a long drive, there are countless ways drivers can find themselves distracted from what’s in their path. This explains why a seven-year study by USDT concluded that of the 844 fatal occupational injuries that occurred at road construction sites, 82 percent were reported to be transportation incidents. In these incidents, a worker was as likely to be struck by highway vehicles than they were by on-site equipment.

The Elite Series device can be seen up to 8 times as far as Class 3 Reflective Apparel standards of 1,280 feet, which can easily be the difference between life and death, especially when considering that distance can be closed in only 13 seconds by a vehicle traveling 65mph — a blink of an eye to a distracted driver.

• 360-degree light aspect ratio so personnel and equipment can be seen from any vantage point:

Construction work occurs in four dimensions. It’s one of the rare workplaces where being aware of what’s happening behind you is just as vital to safety as what is in front. In fact, backing up accounts for about 50 percent of fatalities resulting from being run over by construction equipment. Guardian Angel’s Elite Series can be mounted to people and machinery to create a 360-degree halo of illumination to alert everyone in a two-mile radius to its presence. In other words, if a device is attached to a machine that’s backing up, workers within the halo’s reach will be able to see the light and position themselves safely, even if their backs are initially turned to the oncoming machine. Conversely, the machine’s operator will be able to see the worker’s Guardian Angel device beacon, even if they cannot see directly behind the machine.

• Effortless 3 ounce weight and magnetic mounting system mean that you don’t have to sacrifice performance for safety:
If safety is paramount on a construction site, efficiency is a close second. The Elite Series is constructed of a virtually indestructible polycarbonate casing and yet still only weighs in at 3 oz. The device’s lightweight means that it can be mounted anywhere on a person’s body without creating an uncomfortable distraction. And since different jobs call for different places and positions that a worker may need to work in, the Elite Series also features a built-in rare earth magnet as well as several other mounting accessories to make different mounting positions achievable quickly and with ease.

According to Gary, safety direction at Intercon Construction, “The Guardian Angel Light is currently being utilized by our night crews and during stormy conditions. This safety lighting device has not only added visibility to these already hazardous environments, but a sense of safety and security for my crews.”

“While there’s nothing that can be done to prevent all worksite accidents, we believe that working to eliminate the 21 percent that occur from visibility issues is a damn good place to start. Guardian Angel is proud to release our new Elite Series, and strive to become the most trusted safety product for construction crews all over the country, said Chad Keller, CEO of Guardian Angel.

Guardian Angel devices are available for purchase through specialty dealers throughout the United States and abroad as well as through the Guardian Angel website.