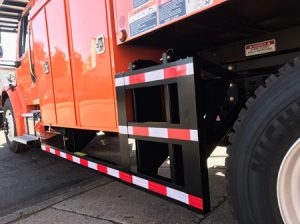 A rise in cyclist and pedestrian deaths in traffic collisions is spurring a push for safer streets regionally and nationally.

A growing coalition of organizations are calling for the implementation of vital safety measures, including side guards on large commercial trucks such as waste haulers, dump trucks and box trucks. The guards prevent people from being pulled under the vehicle’s wheels and run over in the case of a collision.

Pedestrians now account for 15 percent of all traffic deaths nationwide, according to a recent Governors Highway Safety Association report. However, in a 2016 tally in Philadelphia, the Bicycle Coalition of Greater Philadelphia found that pedestrians and bicyclists made up more than half of the city’s road deaths.

“We’re looking at a whole range of solutions,” said Stuart. “At the top of our list are truck side guards, along with protected bike lanes, speed enforcement and other community level traffic calming approaches.”

According to Stuart, to promote safer streets, the Bicycle Coalition is also working with various groups – including AARP, Uber, the American Heart Association, the Realtor Association and the Chamber of Commerce – to rally around Vision Zero principles. Vision Zero is a strategy to eliminate all traffic fatalities and severe injuries while increasing safe, healthy, equitable mobility for all. First implemented in Sweden in the 1990s, Vision Zero has proved successful across Europe, and now is gaining momentum in major American cities such as New York City, Philadelphia, Los Angeles, Seattle and Boston.

“Companies and local governments that operate in major urban areas should take a careful look at side guards as a way to prevent tragic incidents involving pedestrians and bicyclists,” said David Biderman, executive director and CEO of Solid Waste Association of North America (SWANA), the largest member-based solid waste association in North America.

According to Biderman, there is an increasing number of cities in the U.S. that have bike share programs, so there are many more cyclists on the road than there were five or 10 years ago. “We need to be evaluating ways to protect the cyclists who may inadvertently run into the side of a truck from being swept underneath the truck,” he said. “Side guards are a leading way to prevent that.”

One example of such side guards is produced by Dur-A-Guard, a Union, NJ-based manufacturer of truck side guards whose devices are Vision Zero compliant.

Biderman points out that side guards can also mitigate the danger of a collision with increasingly distracted pedestrians who may be texting while walking or listening to music with earbuds. “For a turning truck, an inattentive pedestrian would walk into a side guard and bounce off the truck instead of potentially being run over by it,” Biderman said.

According to Biderman, there are more than 100,000 garbage trucks in the U.S., with trucks operating in every city. “You need to employ best practice techniques to prevent the worst from happening,” he said, “so we are encouraging waste haulers to be proactive and not wait for an incident to occur before considering side guards.”

One challenge of getting side guards implemented in a majority of waste hauling trucks nationally is the large amount of individual variation among the vehicles.

“To implement side guards on a wider basis, it is important to customize them to any make or model of garbage truck because the vehicles come in a variety of configurations,” explained Biderman. “There are different kinds of trucks, and the bodies are different lengths. You need to be able to customize the side guards to fit the space between the wheels to prevent someone from falling into the space and being run over.”

One of the nation’s highest profile uses of truck side guards so far occurs in New York City, which is requiring the safety barrier on 10,000 vehicles by 2024 as part of its Vision Zero Action Plan for ending traffic deaths and injuries. To comply with New York City’s Vision Zero program, Action Carting Environmental Services, a provider of non-hazardous waste management services for New York City and New Jersey, chose to retrofit its fleet of trucks with side guards from Dur-A-Guard. Dur-A-Guard worked with Action Carting to accommodate the various makes, models and configurations of its fleet.

To encourage such implementation, Biderman recommends the use of side guards that ease truck operation and maintenance. Some side guards, for instance, do not need to be permanently welded onto trucks. As an example, companies like Dur-A-Guard offer side guards that lift up or swing down on hinges to offer access beneath the truck. Another high-density aluminum design is lightweight enough to be removed by one person.

With the momentum growing toward utilizing side guards to reduce traffic-related deaths and injuries at the regional level, there is also movement at the national legislative level rising as well. In fact, one proposed federal law seeks to save lives with truck side guards. U.S. Senators Marco Rubio (R-FL) and Kirsten Gillibrand (D-NY) recently introduced the Stop Underrides Act (S. 2219), which aims to prevent a deadly type of crash between trucks and cars. These traumatic accidents occur when a car slides under a large truck’s body or trailer, directly impacting the car’s windows and passengers, sometimes decapitating them. Underride crashes are often fatal, even at low speed. The Stop Underrides Act proposes adding a simple barrier under trucks, called an “underride guard,” to prevent a car from sliding underneath a truck in an accident.