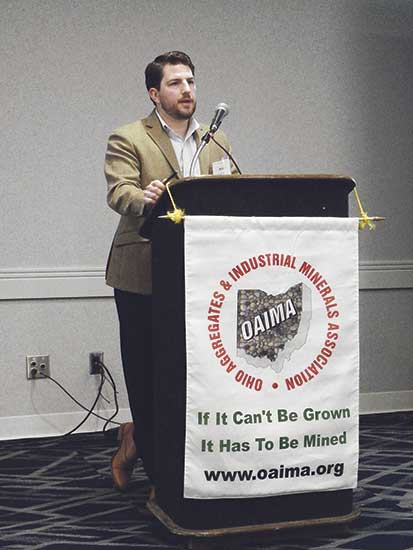 The Ohio Aggregates and Industrial Minerals Association (OAIMA) hosted this year’s biennial Northeast Mine Safety and Health Conference at the Hyatt Regency Columbus Conference Center April 3-5. Patrick Jacomet, OAIMA executive director, welcomed safety professionals from the Mine Safety and Health Administration and mining companies from at least five states. Jacomet began the three day event by introducing Keynote Speaker Sheila McConnell, director of Standards, Regulations and Variances (OSRV), one of 13 speakers on a most informative agenda.

McConnell, a recent appointment to this position, introduced herself, describing her past efforts at the Department of Labor where she became acquainted with MSHA’s role in industry and its importance. With recent changes in the federal administration, she received her new appointment as OSRV Director.

McConnell began by discussing the downturn of fatalities in Metal Non-Metal (MNM) mines and the decrease in MSHA citations and orders from 2010 to the present. In 2010, MSHA recorded 73,713 citations while in 2016; “only” 56,780 citations were handed out. Nevertheless, this downturn shows a distinct improvement in safety awareness among Metal Non-Metal mines in recent years. McConnell said that as a part of MSHA’s efforts to promote safety, they are planning to resume their quarterly safety phone conferences.

Addressing active regulatory issues, McConnell said the proposed final rule on Examinations of Working Places in Metal and Non-Metal mines, published on January 23, 2017, was set to take effect on May 23, 2017, but it has been delayed to take effect on July 24, 2017. On another issue, the request for information that was issued for Exposure of Underground Miners to Diesel Exhaust is open for comments until Jan. 9, 2018. With the number of related issues that go along with this important and technical topic, additional time has been given for fact finding to better prepare for this effort. NIOSH will also be involved in the gathering of data as part of the process. Finally, the proposed rule on Proximity Detection Systems for Mobile Machines in Underground Mines, is being reviewed as to whether it would be a reasonable rule for MNM mines as well as for coal mines.

Jennifer Lehman, PHR, CTM, Ohio and West Virginia manager for HR and Safety for Martin Marietta Materials, covered the importance of proper safety guarding on equipment found in quarry operations. Lehman’s overview of the kinds of guarding needed included protection from components on crushers and screens, rotating equipment, drive and power transmission components, packaging and palletizing equipment, power tools and auxiliary equipment, conveying equipment, and mobile equipment — virtually, anything that moves. She said that based on 30 CFR 56/57.14107 guidelines, the guards are meant to protect workers from inadvertent, carless, or accidental contact with these items whether deliberate or accidental in nature.

Lehman concluded her presentation with a “Family Feud” style competition featuring photos of equipment guarding situations that demonstrated “right and wrong” ways to protect workers. Attendees enjoyed evaluating the various conditions represented in the photos, while competing for the opportunity to give correct answers as to how and why the guards were safe or not safe.

Nicholas Scala, Senior Counsel for Conn, Maciel, Carey LLP and co-chair for their MSHA Workplace Safety Practice Group, offered recent changes and updates in MSHA safety oversight of mining under the new federal government administration as well as some recent findings in cases that could affect the aggregate industry.

Scala said the Trump administration is looking to ease the regulatory burden on mining, especially in the coal industry. He said we could expect changes in regulation enforcement, with reduced government involvement in industry. Because of the delays in confirming appointments of cabinet members by the Senate, there were still no assistant secretaries for OSHA or MSHA at the time of this event.

Interestingly, he noted that President Trump has ordered agencies to propose two rules to be withdrawn for each new rule that is proposed for enactment. This is being done as a way to remove outdated or burdensome regulations. On another note, the Federal Mine Safety and Health Review Commission, a third party created by the Mine Act to hear disputes between MSHA and mine operators is still awaiting the nomination of a fifth commissioner to fill a vacant seat on the five member panel. With the confirmation of this appointment, more rulings will take place that do not end in a deadlock since the four existing commissioners’ rulings often end in a stalemate on a regular basis. This is due largely in part to the fact that these positions are appointed by the federal administration that is in power at the time of the vacancies, much like the US Supreme Court. Thus, the judges tend to have a certain bias when making their decisions.

Paul Cook, CMSP, with the MSHA Educational Field Small Mines Service (EFSMS), works out of the Hebron, OH office as a safety trainer. Cook, whose 30 plus years of mining experience gives credibility to his presentations, focused on how to safely and to successfully work with contractors at mining sights, especially when it comes to safety training and preparedness. Cook noted that a number of accidents and approximately one-third of the mining fatalities involve contract workers as opposed to mining company employees. He emphasized the importance of educating contractors on the importance of proper training and safety protocols based on the MSHA and OSHA training responsibilities and requirements. Much of this training needs to take place long before the contractor’s work begins.

According to Part 46 training requirements, contractors that require comprehensive training include: Drillers or blasters, workers that are assigned to extraction, screening or sizing, milling or crushing, haulage within the mine, maintenance and repair of mining equipment, and shaft or slope construction. Comprehensive training is required to be conducted by the mine operator. The Part 46 training plan includes a written plan, name of the operator or contractor, mine or operator ID number, name of the people responsible for safety at the mine, description of teaching methods and materials and time spent on each, and a list of people or organizations providing training. Cook said the thoroughness of these procedures and guidelines is extensive and needs adherence.