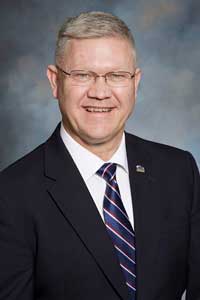 WASHINGTON, DC — George R. Nash Jr., director of preconstruction for Branch & Associates in Herndon, VA, began his one-year term as chair of Associated Builders and Contractors (ABC) on Jan. 1, 2018. He leads the 21,000-plus member association’s executive committee and board of directors, guides its national initiatives and serves as its spokesperson.

Nash has more than 35 years of experience in the construction industry and has worked in every facet of commercial construction, including estimating, procurement, operations, preconstruction and business development. He has managed a multitude of projects ranging from small and large commercial buildings to public stadiums.

“George’s experience has prepared him to lead the industry as we cultivate the construction workforce of the future, defend the principles of free enterprise and deliver high-quality, safe construction projects,” said ABC President and CEO Mike Bellaman. “George understands the critical role of commercial and industrial construction companies in growing the economy and creating jobs as our members begin to see the benefits of recently passed tax reform legislation and regulatory relief from the Trump administration.”

Previously, Nash served as ABC chair-elect in 2017 and as the Mid-Atlantic region vice chair in 2016 and 2015. The Mid-Atlantic region includes members and chapters in Delaware, the District of Columbia, Maryland, Virginia and West Virginia. He was the 2014 chair of the ABC National Political Action Committee and the chair of the ABC Metro Washington Chapter in 2010.

Nash has also held prior positions in a variety of construction and community groups, including being a member of the Town of La Plata Green Building Committee, a mentor and advisor for the ABC Metro Washington Leadership Development Program, a member of the Charles County Chamber of Commerce Legislative Committee and a board member of the Northern Virginia Transportation Alliance.