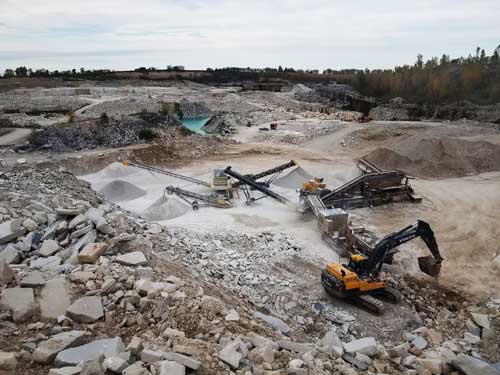 Beginning September 2017, Eden/Valders Stone set up their own crushing plant, a new venture for the company at the Valders Quarry. The crushers have been running 11 hour days, to reduce a huge accumulation of rock — much of it quarried and stockpiled there 30 years ago by a former owner. The goal: to produce quality aggregate for road stone and clear stone.

“We have 1.6 million tons (approximately) to crush in this pile,” explained Tom Schuh, supervisor of the company’s new crushing operation. “That number is not a guess. We calculated it from fly-overs, walk-arounds, and measurements.” The company had the already-quarried and piled stone, as well as customers who were ready to purchase their locally produced aggregate. What they needed was a dependable supply. To achieve that, operating their own crushing plant appeared to be the only solution.

Supervisor Schuh, who previously supervised a section of the stone fabrication building, also mentioned other possible plans in the works. “We’re considering expanding our aggregate market to include clear stone for additional concrete suppliers, aggregate for asphalt producers, and rip rap, in addition to possibly moving material by barge on Lake Michigan,” he noted.

For the newly purchased crushing plant, owner Jason Rohlfs selected a KPI JCI 5260 Fast Pack Primary Impact Plant, a horizontal impactor. One advantage of this tracked behemoth (weighing 130,040 pounds) for use with Valders’ stone pile is that it is mobile. “We can move it from one area to another as the pile is crushed,” commented Martin Biller, geologist and health, safety and environmental manager.

The KPI JCI 5260 also has an exceptionally large feed stock opening, 36 inch x 60 inch, a distinct advantage with the larger sized rocks on the 30-year-old pile, although some still need to be broken into smaller pieces using the hammer attachment on their Volvo excavator.

In addition, the 5260 Primary also conveys material already-to-size out of the system, saving both time and unnecessary wear on the machinery. This KPI JCI is capable of a large throughput of the piled dolomitic limestone. The plant configuration is diesel/electric.

Sandvik secondary cone also has a return conveyor for material that a sensor indicates needs to be re-crushed to meet product specs.

This Sandvik also has automatic overload protection in the form of a relief door. If the crusher is in danger of becoming jammed by overloading or by uncrushable material, the door opens and the material falls out, rather than causing downtime for the whole line.

In addition, Rohlfs wisely decided to include a stand-alone CedarRapids 6 x 20 foot screen with three levels in Valders’ crushing plant, along with 5 conveyors. “With this set-up, we can make multiple products at the same time, from sand to 6”clear stone. We do not wash, but with the capacity to screen twice, we are able to produce clean clear stone by double-screening alone,” explained Schuh. “We are often making four different products at once.”

Rohlfs also purchased two Volvo loaders. Eden/Valders Stone prefers Volvos for their fuel efficiency, although their CAT 980 is still used for the heaviest work. “We use a John Deere 450 excavator to feed the crushing plant,” added Schuh, who supervises a team of three experienced operators. “I fill in wherever I’m needed,” he added.

With plenty of work at hand in the 1.6 million ton pile of stone, the crew has been running at 100 percent since the end of September, working 11 hour days from 6 AM to 5PM, until deepening winter’s early nightfall shortened their work days to end at 4.

Crewmembers still arrive at 6 AM, however. “We turn on the oil heater when we first arrive, fuel machines, and do equipment checks and minor maintenance,” commented a crewmember. By the time the oil is heated enough to pump, all the machinery as well as the operators are ready to roll.

The Volvo 120 and 220 are kept busy through the workday, moving product flowing from the conveyors to more permanent stockpiles. When a rare machinery breakdown occurs, the experienced crew can diagnose the problem and make needed repairs themselves.

The crushing plant will be running straight through the punishing Wisconsin winters, working year-round to turn that 30-year-old rock pile into salable aggregate.

Having their own crushing plant has already been a considerable convenience for Eden/Valders Stone. When the Eden Quarry had an obsolete ramp that needed to be cleared so additional stone could be mined in that area, the ramp was taken care of expeditiously. The crushing plant was moved from the Valders Quarry to the Eden Quarry, where operators quickly crushed the stone in the ramp into aggregate, then moved back to Valders to continue the attack on the 1.6 million ton stone pile at the Valders Quarry, scarcely missing a beat.

Loads of aggregate are hauled by contractors who appreciate having the quality, local product. Unlike many companies opening a new product line, the Valders Quarry did not need to hire a dedicated salesman for its aggregate. Even though the crew started crushing late in the season, employees were able to spread the word to draw customers in quickly. “Tom Schuh knows all the guys locally who use aggregate, and he let them know we were in business,” explained Biller. In turn, Schuh said, “Dave Bothe, General Manager at Valders, spread the word to users outside the area.” With Valders’ reputation, this was enough “publicity” to draw 25 to 100 trucks a day to the quarry to pick up loads of aggregate.

“At the present rate, the company is expecting to load about 50 trucks a day next summer, with the output of this crushing plant now at about 3,000 tons per day,” added Schuh.

Having a new Rice Lake Weighing System SURVIVOR® truck scale in place when owner Jason Rohlfs decided to go with a company-owned crushing plant has been a big benefit. Rohlfs had previously chosen their new, custom designed SURVIVOR® truck scale, which was installed last spring.

“We’d had the old one, probably for about 25 years, and it was just worn out,” commented Martin Biller. “Besides,” added Tom Schuh, “our previous truck scale was too short. We couldn’t weigh a whole semi on it. We had to weigh semis axle by axle,” a cumbersome procedure at best that would be out of the question with the addition of the aggregate pick up.

SURVIVORS® are carefully engineered to have the most steel at the points of heaviest stress, with closely spaced I-beams to support the weighbridge so that each truck tire is supported by an I-beam at all times. Rohlfs also chose the optional side rails to ensure that trucks don’t veer off center.

In addition, SURVIVOR® truck scale systems offer automated features that owners of older truck scales can only dream about. Valders’ system, for example does not need an attendant. When drivers arrive to pick up loads of aggregate, they park on the scale and enter the adjacent small building, where they can log themselves in.

“We log in using our badge number,” commented a truck driver who was in the process of using the new system. “We enter the type of load we are picking up, from a printed list of possible load names. The system weighs my empty truck and prints out the weigh slip. I tear off my copy, and drive in to pick up my load. When I come out with my truck loaded, I repeat the process,” and the SURVIVOR® truck scale system calculates the net weight of the load.

In addition, their SURVIVOR® truck scale system brings other efficiencies. “Each transaction,” continued Schuh, “is immediately recorded on the computer and routed to computers in both the main office and the accounting department. At the end of each month, accountants can quickly check the number of tons of each size of aggregate sold. Having the system makes it possible for us to bill our aggregate customers ourselves.

“Our scale is designed to take a lot of abuse,” he added. In fact, SURVIVOR® Series truck scales are designed to accommodate a minimum of 250 trucks per day for 25 years without weighbridge failures, which is equivalent to more than 2 million weighments. Not a bad choice for a busy building stone quarry and fabrication business, together with a budding aggregate crushing operation that is expected to keep on growing!