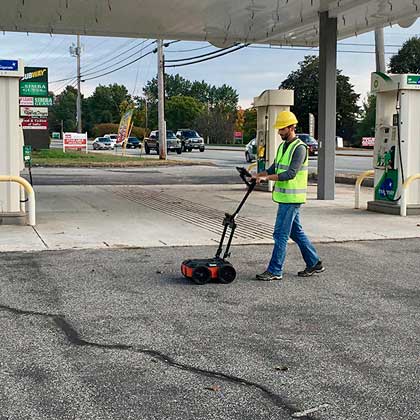 New utility scanning technology is now available that will add to the professional utility contractor’s toolbox. The new UtilityScan system from GSSI uses a novel approach called sensor fusion, in which coils that detect power radiated from electrical cables are fused with ground-penetrating radar (GPR) in a single box. This new system produces an overlay over radar data that shows the presence of powered electrical cables. This integrated capability is invaluable for the smaller electrical contractors, utility installers, and gas and water utilities, as well as towns, municipalities, and states charged with locating and marking underground utilities. Weighing only 34 pounds, the new UtilityScan is the smallest and lightest utility locating GPR system on the market. The availability of the affordable new unit is helping companies serve existing customers better, and expands their service portfolio while also increasing their business.

Creating a more affordable GPR device for the utility locating market required a complete product redesign. The goal was to develop a simple to manufacture package that would maintain the excellent performance and ruggedness associated with higher end utility scanning equipment produced by GSSI.

From the beginning, the product design strategy was to focus on reducing the number of components built in-house, including expensive customized computers used for controllers. Using consumer-based electronics instantaneously reduces costs by a significant amount. Users can select from two tablet options based on their application-specific need, and choose the configuration that best suits their budget. One option is the consumer-based NVIDIA SHIELD tablet K1 and the second is the fully-rugged Panasonic ToughPad® FZ-B2. If the tablets break, users can purchase a replacement. Or, they can purchase both tablets for an interchangeable system.

The affordability factor was a primary motivator for Peter Doyle, technical sales manager for Detection Solutions, a reseller and distributor of GSSI products based in Australia. “The importance of an affordable unit was immense for the customers we deal with,” said Peter. He adds, “By making it more economical, they can have more units. Since we exclusively sell GSSI equipment, price and performance are always the biggest issues. Now, some customers will be able to get that second or third system to complete more jobs, and know that they’re going to their jobsite with quality equipment.” He adds that Detection Solutions has already introduced the new UtilityScan to new and existing customers — from surveyors to contract locators. “All have shown an interest and enthusiasm for this new product, with many placing orders.”

Mark Johnson, Market Manager for Ground Penetrating Radar Systems, Inc. (GPRS), also cited the affordability factor as a big plus. GPRS is the nation’s largest company specializing in detection of underground utilities and scanning of concrete structures. “The more affordable the equipment, the sooner we can put a new guy in the field and continue to grow the business,” said Johnson.

In the past, use of consumer-based controller components had always been hampered by the need to charge them using a (somewhat flimsy) cable plugged into the back of the device. Since GPR systems are frequently used in field environments — typically dusty, wet places — the normal USB cable would not hold up.

The upshot was that the team decided to implement a wireless design, completely eliminating the connector issue. Of course, the wireless design came with its own complexity — the Wi-Fi had to be robust enough to handle the data rates encountered, and the antenna had be rugged enough to satisfy the needs of customers pushing these machine through dirt. The final design also includes a backup wired connection if Wi-Fi is not allowed on a particular site or facility, for example, at a nuclear power plant or some government offices.

Other goals included making the design bomb-proof, as well as impervious enough to water and dust so it could receive an IP65 rating. Portability was also extremely important; the goal was to design the system so it could fold down into the back of a small car, or even be stowed in an airplane overhead compartment. The unit measures only 22-inches by 19.25-inches by 12.5-inches. The more expensive ToughPad tablet option provides the full weatherproof capability and IP65 rating. Chassis design was critically important to the overall product design process. The team explored many different options, eventually selecting a new molding technology that could make strong parts at a lower cost. The chassis is made from an insulated structural foam injection process, in which thermoplastic materials such as high-density polyethylene (HDPE), polypropylene, acrylonitrile butadiene styrene (ABS), and styrene are used along with a blowing agent to produce a molded part with a cellular core and solid skin.

Made in the USA by Minnesota-based General Pattern Company, the case parts are strong and very light. This manufacturing process is the same one used in the production of Pelican Products’ well-known high-performance protective cases. This chassis solution enabled GSSI to meet its design goal of obtaining high quality parts at an excellent price point.

The chassis design also accommodates existing GPS systems used for surveying applications. The system includes a 3/4-inch threaded rod that allows the user to mount a survey pole for an external GPS antenna.

The UtilityScan is equipped with four small wheels designed for use on prepared surfaces, including concrete, asphalt, or compacted dirt. For rough terrain applications, the system was designed to be compatible with a larger cart that will make for easy operation in uneven surfaces and over large rocks.

The internals are where the new GPR system really shines. The antenna design is based on an existing state-of-the-art digital antenna. This 350 MHz antenna uses patented HyperStacking technology that allows users to see deeper targets and operate in conditions considered too “noisy” for conventional systems. HyperStacking uses high speed interpolated sampling to reduce such commonly encountered issues as dynamic range limitations, regulatory compliance issues, sampler core offset error, and timing errors. The HyperStacking design also uses less power, which allows batteries to run the system for more than eight hours. This is a useful feature for users who do not want to continually swap out batteries in the field.

The system design also includes LineTrac™ technology, which helps locate specific power sources underground, including AC power and induced radio frequency (RF) energy in utilities. Coils that detect power radiated from electrical cables are fused with standard GPR radar into a single box, using a method known as sensor fusion. This combination of sensors produces an overlay over standard radar data that alerts users of the presence of electrical cables.
The system’s tablet provides a direct connection with a user’s GPS system, which can be used for providing location information in the radar data file. Software to communicate with the GPS system is provided using Bluetooth technology.

UtilityScan is also equipped with a user interface that is significantly more intuitive for a utility contractor. Rather than having to learn numerous buttons and settings to set up the unit, the software removes the complexity for tuning data. Instead, automatic processes and algorithms perform these functions.

For example, the software balances the data brightness (data gain) no matter what happens with ground conditions. Real time algorithms constantly balance this data when users go from wet to dry ground, or from pavement to sodded lawn or dirt. This makes it easier and quicker for users to find targets, like utilities or pipes.

One new operating mode automatically determines the direction the system is traveling. With most GPR systems, one pushes the machine forward like mowing a lawn. With this system, users can collect data going backwards just as easily as going forwards. This might be desirable if users want to start up against a building and get closer. It is also a good option for going over rough surfaces and thick grass, where it may be easier to pull than push the machine.

In the field with the new UtilityScan

According to Detection Solutions’ Peter Doyle, the new UtilityScan is a perfect size, and offers easy setup. He also notes that the wireless antenna is a great functional feature, as there are fewer plugs that can be damaged or broken. “The new interface is user friendly and easy to learn, making it quick for inexperienced users to navigate. In addition, the LineTrac capability has also been well received, as it can help on large jobs by identifying certain assets quickly for later verification.”

Mark Johnson of GPRS cites the new UtilityScan’s small size as a major advantage. “Sometimes we get into areas where we have tight spaces. For example, I am currently working at a power substation where there is no more than a foot and a half of space between the concrete foundations holding up all these electrical transformers. Larger units on a three-wheeled cart would be more cumbersome in that type of setting and could be a disadvantage there.”

The only limitation Johnson cited is that the small wheels might not be as practical for areas that are very rocky or not well smoothed over. “Sometimes we get in really rough areas where we are doing utility locating, or looking for underground storage tanks in an area that has not been touched or manicured for years,” said Johnson. “There may be boulders and rocks in the area and we need larger wheels to do those kinds of jobs.” For these harsher areas, UtilityScan can be used with the optional rugged cart.

There are multiple methods available for detecting utilities and the majority of utility contractors use many different methods. The tool currently used most is the traditional radio detection method, which involves waving a wand back and forth over an area. This method gives information to about 3 to 4 feet of where a target is located. By contrast, the new UtilityScan provides a much higher level of horizontal accuracy, showing information to within an inch of the location. It can also differentiate among the 4 to 5 utilities that may be located in a trench since GPR can provide depth estimates.

Both external and internal components of the new GPR unit went through many revisions during the industrial design project. The overall goal was to develop an extremely portable tool that fits in with the rugged products GSSI produces. The end result came in at a target price well below the median price of most GPR systems and ideal for price-sensitive customers. The new technology is more affordable for the end user and provides an easier entry into the GPR market. At the same time, the system’s data fusion using multiple sensors, and easier user interface, provides an extremely high level of performance for today’s utility locators.