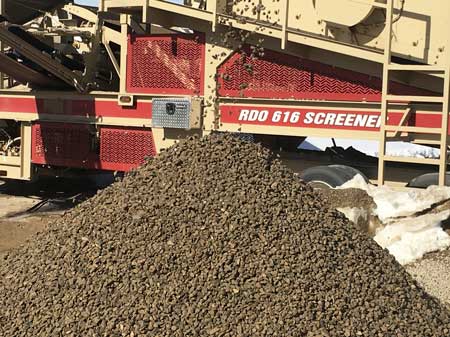 Monarch Mountain is the sand and gravel division for the QUIKRETE Companies, and the company supplies all of the sand that the noted manufacturer of packaged concrete and cement mixes puts into bags — whether property sand, mason sand or half-inch stone.

Based in Acton, ME, the screening plant has been operating as part of QUIKRETE for two years and three men work at the facility, supplying the sand.

“It’s a great machine and very simple to run,” he said. “You’re seeing a lot of these new screening plants being all computerized and after a year, all the circuits break down and they just don’t work anymore.”

Over the almost two years that Maglieri has worked with the RDO, the only thing he’s had to do maintenance-wise is adjust the screws on the belt.

Joe Collazo, Equip Sales and Leasing Corp sales manager remarked that the “RD Olson screener was best suited for the job due to its aggressive 5/8 inch throw shaker box and their use of a self cleaning ball deck tray, which minimized the blinding over of their 4mm screens. The combination of the 5/8” throw and the ball deck system aided through put which boosted production.”

“The 6×16 that we purchased has a ball deck in it, and the balls jump up and down on the bottom screen — my concrete sand screen or my mason sand — and helps keep the screens clean, and helps them to be non-blinding,” Maglieri explained. “So, even when it’s raining, we can screen sand.”

Same is true for when it snows or on days with low temperatures, even if the sand is wet. In fact, with the heavy snowstorm that hit the area in early March, the operation was up and running fairly quickly.

“Usually other companies aren’t screening during the winter time, and need to shut down, but we are able to screen,” Maglieri said. “Our production on the screening plant now is roughly 1,400 tons a day through the machine, so roughly 7,000 tons a week.”

The sand has to go through dryers to dry it out before going to the bagging plant in New Hampshire. The end product — before bagging — needs to have zero moisture.

“The freshest sand that we can have is key,” Maglieri said. “Stored sand gets frozen and hard, and that can be a pain.”

This particular screen is available tracked or with tires, and Maglieri made the decision to opt for the tires because it was a little less expensive — and having a tracked machine was not essential to their location. Operation was as simple as setting it up and starting to feed it.

“It’s really that easy,” he commented. “There are other machines you can get — but then you can’t get the parts. With this machine, I don’t have any downtime.”

Overall, Maglieri and Monarch Mountain spent close to $1.5 million on the plant. In addition to the 6×16 RDO three-deck screen; the plant utilizes a power screen Chieftain, loaders and excavators, and rents a Finlay jaw crusher and Finlay cone crusher.

Although Monarch Mountain currently supplies exclusively to QUIKRETE, it is planning to begin selling to some outside vendors and customers in 2018.

A typical day at the plant begins with the loading of 6-7 trucks, followed by some quick servicing of the screener and then getting started with the screening of sand, which occurs for about 8-9 hours a day.

“During the summer, we work 50-60 hours a week and the winter time we go 30-40 hours,” Maglieri said. “This plant has brought up productivity by at least 40 percent over the last year.”