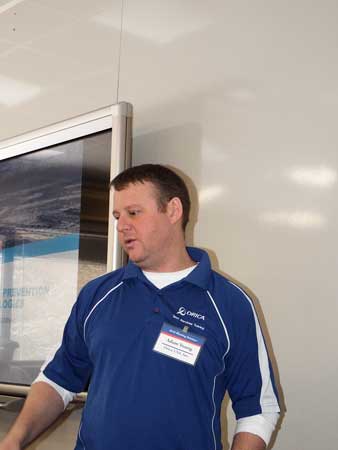 For drilling and blasting professionals looking for newer, safer and more efficient ways to do their work, industry experts offered new, technological advancements at the 2018 Mine Blasting Safety and Application Seminar, Jan. 17-18 at the National Mine Health and Safety Academy in Beckley, WV. During two of these presentations, Joe Nawrocki, Caleb Strope and Adam Young shared ideas on how to use new face profiling equipment as well as the latest in drone and laser technology.

First, Adam Young, with Tech Services Training for ORICA USA, Inc., described several incidents of faulty blasting events as a way to highlight the importance of quality blasting preparation. This is in an effort to help prevent flyrock incidents that cause considerable damage and occasional human fatality. He said that flyrock could travel at several hundred miles per hour, even 500 feet away from the initial blast. With that in mind, blasters need to consider several important aspects of the process to perform a successful blast.

Young began by stressing the importance of excellent communication. That includes communication between drillers and blasters, as well as with quarry management. Following a video presentation that featured significant house damage from flyrock due to inadequate communication between drillers and blasters, he recommended that D&B personnel make sure to be thorough in pre-planning. This includes blast design and profiling. He said that inaccurate timing and faulty stemming frequently leads to problem blasting.

In one example, the blaster was not working from the driller’s log. Young believes this is an extremely important tool when it comes to placing proper blasting charges.

In his example, the blaster was not aware that there was considerable (8 to 10 feet) unconsolidated material atop the bench. This material eventually served as flyrock when the blaster filled the drill hole with blasting material, to within four feet of the surface, thinking the burden at the top of the wall was all solid material. “Even without the drill log, a brief conversation with the driller could have saved the blaster a lot of headache,” he said. “Good communication and proper blast design can get the job done safely.”

In another example, Young recalled how a blaster had concerns about the geology and blast design, so he called in additional technical support. This additional consultation provided 3-D profiling, which ultimately led to a successful blast. Young said that after a number of problem blasts within his own company, they decided to provide all of their blasters with 2-D Laser Profilers to help design more accurate blasts. More recently, 3-D profiling equipment has improved on the earlier equipment, giving blasters tools that are more accurate than in the past.

Another tool to help with accurate blasting is the Boretrak® borehole-deviation measurement system. With this added accuracy, the blaster can do a better job of measuring the bore angles. “There’s better blast fragmentation as well,” he added.

In a second presentation about face profiling and borehole tracking, Joe Nawrocki and Caleb Strope of Dyno Nobel, gave tips on how to use new technology as an aid to safer, more efficient blasting. Nawrocki began by defining “efficient blasting.” He said that efficient blasting is the use of available energy to break and move rock. What makes blasting safe is when it is done without flyrock and when using just enough (blast) energy to produce a blast without excess vibration and air-blast. He said the steps to a successful blast include a well-prepared bench, accurate measurements, proper blast design, a good pattern layout, accurate drilling and the use of the driller’s log. Combining these elements along with careful hole loading, stemming and safety management will provide the ideal blast.

Nawrocki said that flyrock is frequently caused by the amount of powder in the first row of drill columns. Blasters should make sure that there is not any soft geology in the first row. Knowing this in addition to knowing the distance of the column from the face of the wall, gives the blaster a safer blast if the blasting material quantities are adjusted accordingly, from the bottom of the hole to the top. Matching the column to the burden for every foot of the hole will make the blast safer. He emphasized that the accurate measurement of the burden is the most important measurement and it is the most widely miscalculated. If the burden is miscalculated, the blast design is incorrect.

“Measurement methods have improved in recent years,” he said. “We have tended to move away from Abney levels and transit and tape, to laser profilers, photogrammetry and drones. Nawrocki touched on the older methods, and then he moved on to the 2-D Laser Profiler, which was introduced about 25 years ago. “They were [a nice way] to get fast, accurate measurements on burden and bench height. You could download the information into a Palm Pilot. That made it very convenient. The blaster could use this information as a way to know how to load the front holds of the pattern. This was used for both layout and hole loading procedures.”

Currently, MDL’s 3-D Autoscan Laser Profiler is an example of more recent technology for face profiling. Caleb Strope discussed the benefits of this more modern 3-D equipment. He said the units can be used from a distance of 1,000 feet from the face. They are able to compute face profiling, muck pile profiling, stockpile surveying, ground modeling and cast blasting. He said that gathering data is quick and simple. The major points of this data include the use of hole markers, the scan, the crest, the toe, any abnormalities and any reference points as needed.

“Hole markers mark the holes and this can be done with cones, reflectors, burden poles, people or anything else that can give you sight from your profile location,” he said. “Once the markers are in place, a ‘point and shoot’ on the markers with the laser will record the data.” This is a manual process.

“The data scan is of the face of the bench and is automatic,” he continued. “With the scanner, you set up a ‘picture frame’ of the four points of the scan on the outside of the face and the system takes a point every six inches, down the face. This takes from two to six minutes and will provide anywhere from 10,000 to 100,000 data points.”

Making sure the face of the material is clean is critical. This system can only “see” what is in front of it. If the muck pile is still in place, the device cannot measure the face accurately and will provide false information. From time to time, a blaster will need to do multiple profiles when a shot is done on two or more faces.

Like Adam Young, Strope agreed that another valuable tool in the new technology toolbox is the Boretrak® system. “The purpose of the Boretrak is to measure the angles and depths of drilled holes,” he said. “This is important for all shots to make sure that the holes drilled are done to their designed angle. Too great an angle can cause to little burden. Too little of an angle can cause too much burden.”

Strope gave a brief overview of how to use the Boretrak. He concluded by saying that combining the 3-D laser information with the Boretrak data can give the blaster a 3-D model of the finished product. More importantly, the technology can be used even before the hole patterns are laid out, to give the blaster a “what if” scenario to help layout a better blasting pattern. With this information, the driller and blaster can layout the blast more efficiently.

Photogrammetry is a more recent technology. This technology gives blasters a visual rendering of the project by taking a photo of the site from two different angles. Software produces a 3-D model that helps the blaster determine a more accurate image of the jobsite. Initially, the photos have been taken with specialized cameras to provide the images. More recently, drones, equipped with hi-tech cameras can do the work without the blaster even needing to enter the pit. The ultimate goal is a high-quality blast, said Strope.