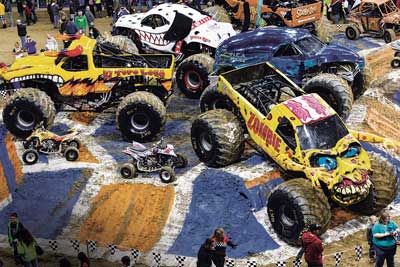 This article originally appeared in the Winter2017 issue of John Deere’s The Dirt.

Preparations for the Moline, IL weekend event at the iWireless Center® began in a late-April downpour. For nearly six hours, 12 dump trucks deposited 1600 cu yards of wet Midwest clay on the concrete arena floor where a dirt crew of four laid down the track and sculpted the ramps and jumps that form the center stage.

It’s a unique undertaking that’ll be repeated numerous times at indoor arenas and outdoor stadiums in more than a dozen countries. A division of FELD Entertainment®, the Tour’s 44-truck stable is the worlds largest racing fleet. With names such as Zombi™ Gravedigger©, Max-D™, and El Loco Toro®, the caricature-like vehicles and their personable drivers are the stars of the show — each with their own dedicated fan following. Their on-track prowess is undeniable, but if you’re a “dirt guy”, you’d be equally impressed by the behind-the-scenes preparation and mad skills of the people who put it all together.

Watching the construction crew do their thing, it’s obvious this isn’t their first rodeo. Resembling another [one-time] well-choreographed FELD event (can you say Ringling Bros. and Barnum & Bailey © Circus?), there’s something going on everywhere. Dump trucks are coming and going, piling their payloads before a 544K loader and 550K dozer that are building the jumps and track base. A 333E CTL positions steel ramps for the jumps, and a 50G compact excavator and a new 331G CTL quickly cover and compact the structures. Dirt and props are moving, machines are flying and everybody is “locked in” — fully aware of their part in the process, as well as the equipment and arena around them. It’s almost as if they can read each other’s minds.

“My team of operators is amazing,” says Senior Event Supervisor Steve Carmack. “Most of them have their own companies or they do earthmoving for a living, and they come along on the tour. They work well together, can run anything, and are very efficient at it.”

Having the right equipment is critical. The John Deere 544K loader is a prime mover that’s used to spot dirt and knock down piles when building the track, stack dirt for jumps and table tops, and load-out trucks during cleanup. “Its reach, stability, power, and speed make it ideal for our kind of work,” explains Carmack.

Visibility is also a big deal. “There’s usually four of us working together, and we need to know where everyone is at all times,” says Carmack. “Mirrors are well placed and rear visibility is really good. And with the booms up, the view ahead is just as clear, letting you easily see to the right or left.”

Every venue has its own unique challenges. For example, in outdoor stadiums the playing surfaces have to be protected. On natural-grass fields, work begins in the cool of the night. To help preserve the turf, a geotech material is placed, followed by thousands of sheets of half-inch plywood, and then the dirt. After the show, everything is removed as quickly as possible. “We have a small window of opportunity, because you can kill the grass,” explains Carmack.

Taking the event indoors eliminates the turf issue but often creates others. Surprisingly, the one common obstacle is the weather. “Inside or out, we need dry dirt, which isn’t what we have this weekend,” says Carmack. He and his crew put in extra hours at the iWireless Center, setting up large fans around the floor and working the wet dirt to help dry it out.

We’ve got to get these arenas ready as soon as we can, and when the show’s over do the cleanup just as quickly,” explains Carmack. “We push the machines to the max and prefer equipment that runs smooth and cycles fast.”
Comfortable cabs help make long days more tolerable. “Especially when we’re loading out,” concurs Carmack. “Eight-to-15-hours are typical, and the 544k’s cab is super comfortable, with good armrests and great back support. Even the 333E’s interior is roomy, so we don’t feel claustrophobic.”

FELD also employs a 544K loader and 333E CTL to set-up and maintain the track at their Paxton, IL training facility. As at numerous Monster Jam events throughout the Midwest, John Deere dealer Martin Equipment supplies and maintains the equipment. “They do a fantastic job of supporting us,” says Carmack.

The former paramedic and motorcycle racer considers himself fortunate to have been orchestrating events such as Monster Jam for 23 years. “I never really saw myself doing this,” he says. “Like many of my crew, I grew up playing with Tonka™ trucks. We’re still a bunch of kids playing in the dirt — except now we have really big toys and sandboxes.”

FELD Entertainment is serviced by Martin Equipment of Illinois.