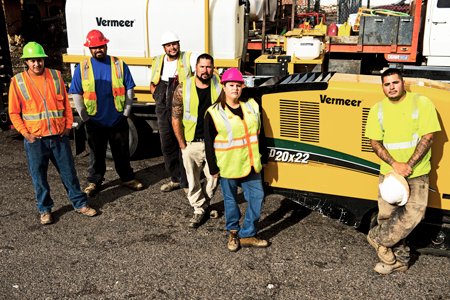 There’s something about horizontal directional drilling (HDD) that sticks with people working on and around HDD rigs every day. It’s the perfect combination of machinery, technology and creative problem solving. And once someone’s been on a drilling crew, it’s hard to imagine doing anything else.

Pat Rodriguez of Arvada, CO, realized his passion for drilling five years ago when he was a laborer working on a drilling crew. After paying his dues, one day his employer asked if he was ready to get behind the controls of an HDD and soon after that, Pat had just completed his first shot. From that moment on, drilling became more than just a job for him. It became his way of life and something that he would eventually share with his family.

Planting the seed
The journey to get to where they are today has not been easy for Pat and his four brothers. When Pat started working for another drilling operator he had just finished serving a short prison sentence. “I made some mistakes when I was younger,” said Pat. “When I was released, I just wanted to get my life on a good path and spend time with the people that mean the most to me — my family. A friend of mine helped me get a job digging holes and I was determined to make the most of that opportunity.”

Pat’s youngest brother Rusty could tell that his older brother enjoyed the job. “Whenever we got together, Pat would plant little seeds with the rest of us,” said Rusty. “It got us excited about the work he was doing and the idea that someday we may all go into business together.” 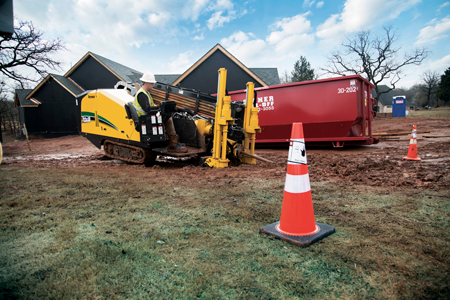 Soon after Pat began running a directional drill for his previous employer, his brother Chris joined him. Chris was a natural with the locator. “At that point, we had already agreed that we were going to have our own drill crew someday,” explained Rusty. “I was managing a warehouse, one of my brothers was running a barber shop and another was doing landscaping work at the time. We were all saving our money so we could eventually buy a drill.”

Purchasing their first drill
The family made a leap of faith the day they purchased their first directional drill. It was a 1996 Vermeer D24x40 Navigator® HDD. “That was a good day,” said Pat. “We were all excited about taking that first step, but we knew we needed more than just a drill to get the business off the ground.”

The brothers bought a new Vermeer VX30500 vacuum excavator and DigiTrack® F2® locating system. “Just getting started, we had some concerns about getting financing for these purchases,” said Rusty. “I had good credit, but we weren’t sure if that was going to be enough. We sat down with Hanson Turnbull at Vermeer of Colorado. He got us the equipment we needed and financing. From day one, he and the rest of the people at Vermeer of Colorado have helped us along the way.”

Having the right equipment, the only thing the brothers were missing was a name. “The name Mile High Flawless seemed like a good fit since we’re located in the Denver area and do great work,” said Pat. They registered the name in December 2014, making their dream a reality.

Landing their first job
It wasn’t until the following August that Mile High Flawless got its first long-term job. “Even though we had the equipment and established the company, we all had to continue to work at our jobs until we got our first major opportunity,” said Pat.

Mile High Flawless got their big break when a former employer gave Pat a lead for a project in Longmont. The project called for high-speed cable to be installed in residential neighborhoods and was scheduled to last two years.

“When we made the phone call to the general contractor on the job, he wasn’t sure if he could give us the job,” explained Pat. “We all jumped in the truck and drove down there to meet with him in person. He could tell that we were persistent and wouldn’t take ‘no’ for an answer, so he asked us to start the following Monday.” 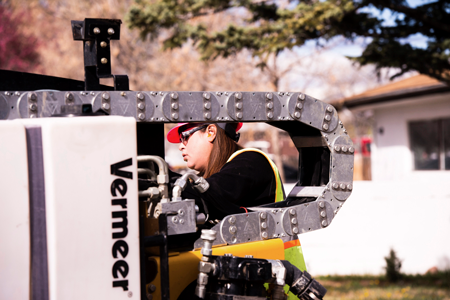 The next week, Mile High Flawless went to work. The job required the crew to drill through homeowners’ backyards using their old D24x40. “We had too big of a machine to do the job efficiently,” recalls Pat. “We would line up the drill at the end of the block and shoot down to the cul-de-sac. It was working but to close the gaps between shots, we would either trench or take down fences to get the drill rig in someone’s backyard. It just wasn’t ideal.”

After a few weeks, the company purchased a used Vermeer D7x11 Navigator® horizontal direction drill to work in backyards. A week later, the crew’s D24x40 blew an engine. “I was sure glad we got the second drill,” said Pat. “Our D24x40 is a good machine, but it had a lot of hours on it. We went ahead and replaced the engine, but it was down for 10 days. During that time, we were scrambling with only one machine operating — doing 120-foot (36.6 m) shots, pulling back and moving on. It was exhausting.”

Upgrading their drills
“We were a few months into the project, and we all had been saving our money,” Pat explained. “I told my brothers, ‘Guys, we need to get a new drill.’ I had my eye on a Vermeer D20x22 S3 Navigator® HDD and knew it would make us more productive. It was a huge step for us, but we all agreed to move forward.”

The first day on the job, Mile High Flawless’ new Vermeer D20x22 S3 bored 900 feet (274.3 m). “It was incredible, and it proved that a new machine would significantly improve our daily output,” Rusty said.

Bump in the road
Seven months into the project, the Mile High Flawless crew suffered a major setback when the general contractor lost their contract. It was a scary time for the brothers, who had just invested in a third drill. “It was a real setback, but we just kept pushing ahead,” said Rusty.

“We took every job that came our way, and they were usually the ones that no one else wanted,” said Pat. “I think Hanson at Vermeer of Colorado recognized how hungry we were and how dedicated we are to doing the job right. He supported us by giving out our card to general contractors in the area who were looking for subs. He went above and beyond to help us get back to having more steady work.” 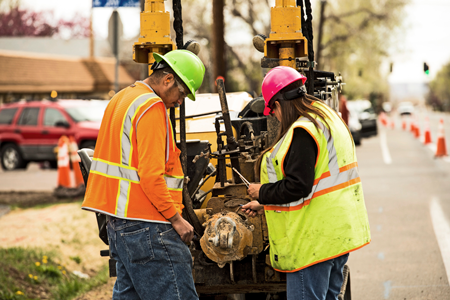 By August of 2016, Mile High Flawless’ fortunes shifted when they landed three major contracts around the area installing high-speed cable and fiber optics for Comcast.

To keep up with their workload, the brothers added another directional drill in the fall of 2016 and two new vacuum excavators. This time it was a Vermeer D23x30 S3 Navigator® HDD and Vermeer VX30800G vacuum excavator. “We needed something a little bit bigger than our D20x22 S3,” Pat said. “It’s an impressive machine that is almost as powerful as our D24x40, but it is more mobile and super quiet.

“We can drill right under someone’s yard, and they never hear the drill — they just see the locator,” explains Pat. “The drill operator and locator can hear each other better over the radio, too.”

Rusty recently made the switch from doing splices and laying boxes to becoming a drill operator for the family and he learned behind the controls of the Vermeer D23x30 S3. “I think all of the onboard technology helped me learn faster,” he said. “The machine’s sensors are a great reminder if I forget a step. After operating that machine for a bit, it was a lot easier for me to jump on our other drills and feel comfortable behind the controls.”

The future
Mile High Flawless’ workload has reached the point that they needed to add a third drilling crew. So the brothers have brought their sister Venus into the business to run an HDD rig.

“We’re thrilled with how we’ve managed to grow the business in such a short period of time, but getting the chance to spend every day with family is what makes this all worth it,” said Pat. “Our family has always been there for each other, and now we’re doing something special together.”

“Horizontal directional drilling is in our blood now — I don’t think any of us can imagine doing anything else,” Rusty concluded.