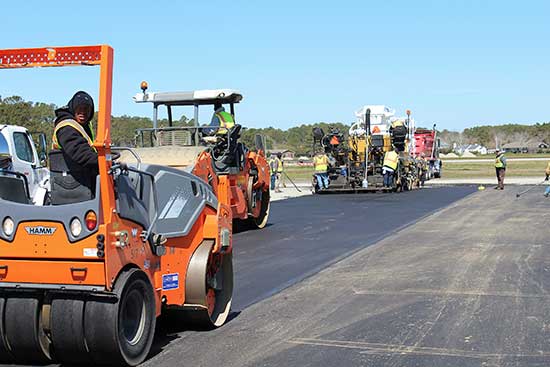 Our team is no stranger to dealing with storms and changing sea levels on the coast of North Carolina. But as we have been reminded all too often, sometimes when it rains — it pours.

In April [2017], we finished construction of a new taxiway at a unique 400-acre, three-runway airfield on the crystal coast in Beaufort, NC. Rehabilitation work on parts of another taxiway and runway were also completed to keep air traffic and ground operations running smoothly.

Originally named the Beaufort-Morehead City Airport, it was renamed Michael J. Smith Field to honor the Space Shuttle Challenger pilot who was born and raised in Beaufort. The airfield is situated just three feet above sea level, so water was a factor for us from the very beginning.

Despite its location near the sea, the airfield drainage system at Michael J. Smith Field was not equipped with tide gates — leading groundwater to rise and fall as much as two feet in the area depending on the wind. Naturally, groundwater was a strategic concern.

If our environmental surroundings weren’t enough, we were hit with two major storms that resulted in additional groundwater and flooding challenges. Tropical Storm Hermine dropped about eight inches of rain on us in September 2016. Then, we got an additional 12 to 13 inches of rain from Hurricane Matthew during the first week of October.

Fortunately, we’ve gained experience in dealing with excess water and flooding conditions from past airfield paving projects on the coast. Based on the knowledge we’ve gained from those projects, we implemented a number of construction methods to ensure success on this job in Beaufort.

Digging in our Heels

Excavation was done below sea level for stabilization during construction, so water was something we always had to be aware of. To ensure a sturdy taxiway, we used a method known as soil-cement stabilization.

For this process, Portland cement was mixed with the existing soil and water, which created a low-strength concrete three feet below the pavement subgrade. The taxiway then received eight inches of aggregate-base course and four inches of asphalt pavement.

Of course, we also had to ensure we were adhering to stringent paving regulations from the Federal Aviation Administration (FAA) during this process. FAA specifications are some of the most difficult to deal with when it comes to mix designs and paving tolerances that are tighter than typical DOT paving.

Because we only had to excavate four feet deep in the ground, we chose to install a sock-drain system for draining water away from the construction site. We would typically use a wellpoint system for dewatering, so this approach was a little bit unusual.

The more traditional wellpointing method involves placing vertical suction tubes at 10-foot intervals around the site. These tubes are connected to a vacuum collection pipe (header) that extracts or draws the ground water. Wellpointing the taxiway for this project would have required 7,000 feet of suction pipe plus 700 wellpoints.

Considering the materials and costs that would be involved in wellpointing, the sock-drain system proved to be the better option for us this time around.

Getting Rid of Groundwater

To keep the ground water at bay, we installed over 7,000 linear feet of sock drain for dewatering, or pumping water away from the job site. These long tubes were perforated with holes and fitted into a fabric sleeve to filter dirt out of the water.

The sock drain was placed around the perimeter of the site using a trencher. Because it was placed outside of the edge of pavement, the sock drain could be left in the ground after construction was finished.

Throughout the project, we also used innovative Hydrema articulated dump trucks that exerted low ground-pressure – making them an ideal fit for the wet conditions we faced. With flotation tires, these trucks allowed us to move heavy loads without pushing water to the surface. A swivel-dumping feature also gave us the capability to dump over the side and rear to minimize turning and backing.

While wind wasn’t a major factor for us, we did have to take precautions to secure our equipment when Hurricane Matthew struck. We moved our equipment to an open area away from trees and debris that could pose dangers.

Typically, with hurricanes that feature very strong winds, we’d move our equipment to a safe offsite location. We didn’t do that for this project since the hurricane was forecast to turn out to sea, but it was good that we took necessary precautions with our equipment.

Thankfully, by taking the steps to protect our equipment, in conjunction with an efficient drainage system, we were able to keep the equipment secure on site.

Through careful project planning and execution in the face of the unique challenges that came our way, we met all specifications and finished the project on time with no penalties.

The success was a testament to not only our crew’s work ethic but also the team’s knowledge of water issues that can come with coastal construction. That knowledge is something we strive to continually build on and cultivate for the benefit of the industry and our customers.