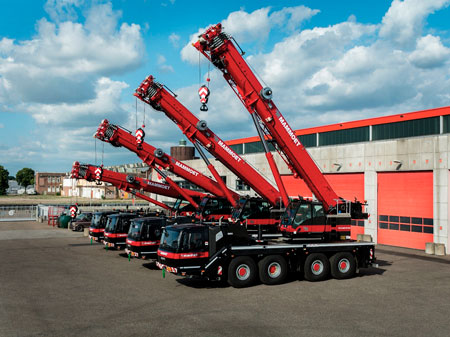 “We purchased the four-axle, all-terrain cranes due to their multifunctionality and one-man operation ability in the 70 to 90 t class,” said Wouter van Noort, managing director of Mammoet. “In the Netherlands, nearly all cranes drive with a two-axle trailer so that the full counterweight can be transported on the crane and trailer. These four-axle cranes take away the need for further trailers and do away with additional transportation costs.”

Developed as the successor of the GMK4080-1, the GMK4090 was designed with the help of Voice of the Customer (VOC) research. As a result, the crane puts flexibility and maneuverability as its main focuses. With its best-in-class taxi load chart and compact footprint, the crane is ideal for a variety of applications. Various counterweight options also give it versatility in roading, which can increase efficiency and return on investment for many owners.

Mammoet received the cranes between April and May 2018. The cranes will now be added to the company’s already established fleet, which operates not only in the Netherlands but also Belgium and Germany.