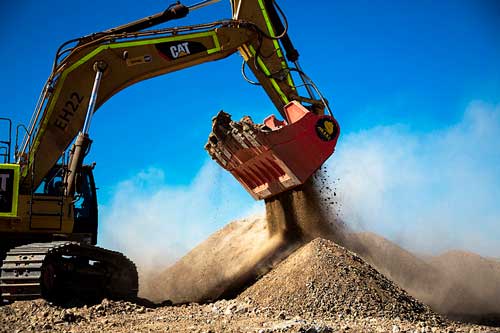 Founded in 1998, Máquina Solo is a Brazilian company which specializes in supplying foundation, geotechnical, mining and environmental equipment throughout the country. Considered to be one of the leading specialist equipment distributors in Brazil, the company, which began operations supplying hydraulic hammers, now acts as the representative for 14 leading manufacturers, supplying over twenty four different product lines.

Driving the business forward into its 19th year is the commitment of all at Maquina Solo involved in the business to deliver solutions that meet the needs of its customers. This is achieved by being involved in all aspects of the supply process, and covers such as aspects as application analysis, equipment selection, sales through to service, and aftermarket support.

One such company that has forged excellent relations with Máquina Solo is Finnish manufacturer ALLU, whose Transformer and Processor attachments have been particularly well received in Brazil. The reasons for this are manifold, but the power, flexibility and transportability of the equipment has contributed to ALLU equipment being highly prized in Brazil, with the service and support provided by Máquina Solo complimenting the equipment.

An area that has particularly seen the benefits of the ALLU Transformer range has been in surface mining operations. As the Transformer is essentially designed to fit an excavator or loading shovel, this has made the equipment ideal for large scale surface mining operations, where transportability and productivity are essential requirements of material handling equipment.

With many units now working throughout Brazil, one such application has seen the ALLU Transformer M-Series being used at a nickel mine, screening chalcedony directly in the mine, in order to upgrade the nickel concentration on the processed material. This particular model was chosen due to its high mobility and functionality in screening the material in-situ, instead of loading onto trucks, then transporting the material to stationary screening plant, and then re-transporting the material back to where it originally came from. This has meant the company has been able to replace its stationary screening equipment, freeing up resources as well as enjoying greater flexibility in its operations.

There is no surprise that Brazilian surface mining operations have adopted ALLU technology as the ALLU M-Series effectively transforms the carrier it is mounted on (loader or excavator) into a high capacity mobile material processor. The ALLU Transformer M-Series attachment is able to crush soft and brittle material, separate hard unwanted impurities in the rock mass, while loading a dump truck or conveyor system. This makes it ideal for processing of soft rock and other minerals in often hard to get to areas, with the M-Series delivering simultaneous mobile crushing, separating, enrichment and loading.

What ensures that the ALLU Transformer M-series really stands out from the rest is the way its use helps to actually transform the entire surface mining operation. The profitability of a business is transformed as materials can be processed at the face, rather than be transported for further processing. This also reduces outside waste deposits and brings environmental benefits, as waste rock is separated before transportation.

Business efficiency is further transformed as the loading and processing of materials is now accomplished in one stage resulting in faster, more efficient processing. Essentially the loader or excavator now becomes a multi-machine that can load and process while simultaneously replacing ‘overlapping’ machines at the jobsite. This eliminates material double handling needs and helps with cost reduction — both highly sought after benefits for efficiency driven mining operations.

The ALLU Transformer M-Series has proved to be ideal for soft rock surface mining applications in Brazil (and elsewhere) as it can easily handle in ‘one-step’ any materials within its range. It can screen any type of material, and by applying the correct amount of crushing force together with the correct drum type; the attachment also efficiently separates hard unwanted waste materials in the rock mass, while crushing the soft material. By adapting to the processing needs and rock mass it encounters, the attachment boosts productivity, through delivering operational efficiency.

Different drum configurations of 50mm (2”) and 75mm (3”) mean differing fragment sizes may be processed with high productivity in ‘one step’. The entire process is fully mobile, and can replace conventional crushing and screening plants in many cases such has been found in Brazil. The ALLU Transformer M-Series has been developed specifically for those companies who deal with large amounts of material on a regular basis, specifically quarries, aggregate producers, surface miners, power plants and process industries. It has been designed to fit excavators and wheel loaders of up to 154.4 US t (160t).