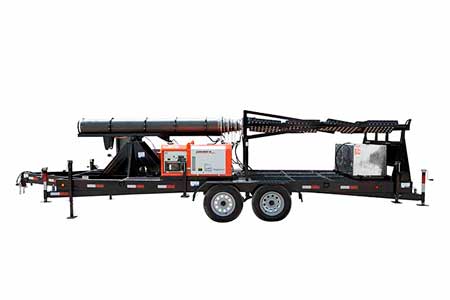 KEMP, TEXAS — Larson Electronics LLC has released a new trailer mounted hydraulic Megatower light plant for heavy-duty industrial applications. This 7-stage folding tower hydraulic plant deploys lights or other equipment to elevations of 77 feet and features a hydraulic ram and mast, as well as high output LED. The entire assembly is mounted onto a tandem axle trailer and powered by a 20KW Kubota diesel generator with a 110-gallon fuel tank. This trailer has been designed to hold steady through extremely rugged outdoor conditions and harsh winters.

The WCDE-20-HLM65-20X500LTL-LED-WSM is a versatile self-contained, towable Megatower light plant. This unit contains a water-cooled diesel engine powering a 20KW Kubota generator and features 20 480-watt LED lights that produce a total of 64,800 lumens each, for a grand total of 1,296,000 lumens. This light plant can run for 43 continuous hours without refueling. The hydraulic tower can be extended to 77 feet, and collapsed to 30 feet for a smaller footprint. The telescoping boom is constructed of carbon steel with a galvanized finish. It is raised from and lowered to the folded position by a single hydraulic ram, and extended or retracted by a second hydraulic system.

An external oil pump system is included with this Megatower, along with robust wind monitoring system that prevents shaking during strong winds to keep the unit damage-free. When exposed to strong winds, such as 40 mph, the system automatically retracts the mast for safe operation. The entire unit is mounted onto a four wheel, dual tandem axle trailer with 12” I-beam construction. The LED light heads are grouped into banks of four. Each bank in wired into the NEMA 3R breaker control box at the base of the mast. Operators control the light heads via an on/off switched breaker per bank of five light heads. The hydraulics are also powered from within this breaker box.

“With over a million lumens of brilliant LED illumination, this Megatower light plant is a viable temporary lighting solution for huge outdoor events and large jobsite lighting,” said Rob Bresnahan, CEO of Larson Electronics LLC. “In addition to its high-powered illumination, this unit is extremely rugged, and features a durable cold weather package that can survive in the roughest conditions comparable with those found in Antarctica.”