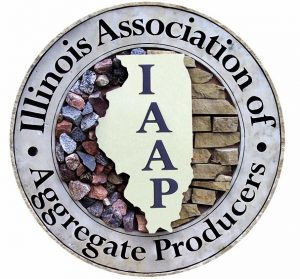 During the IAAP annual convention in March, the 2019 annual Illinois Department of Natural Re-sources’ Aggregate Reclamation Award was presented to Lafarge Aggregates Illinois (Lafarge), Algonquin Pit, which straddles the boundary between the villages of Algonquin and Cary, IL.

The mine’s 240 acres were purchased in parcels at various times since the 1970’s by Meyer Material and later Lafarge, after acquiring Meyer Material. Mining operations began in 1993 and reclamation of the entire site was completed during 2017 and 2018. This was both an above ground surface mine as well as a below water operation with a depth of approximately 90 feet to the pit floor and an additional 20-30 feet into the water table.
Scrapers, backhoes, haul trucks and bulldozers were used to remove the overburden which would later be utilized in the reclamation process. Above ground mining was performed using front end loaders to supply the primary crusher which in turn transported mined aggregates to the processing plant via a mile-long conveyor system. Below water mining was performed by either drag-line, backhoe or dredge and created the lake that is now the center-piece of the community park.

Lafarge worked closely with the Village of Cary to devise a plan for final reclamation of the area consisting of a 196-acre park, known as Rotary Park, dedicated to the Village. The 67-acre lake is surrounded by walking trails. Primary activities within the park consist of walking, biking, and fishing. A parking lot and on-site restrooms have contributed to the value of this community asset. Wildlife have quickly taken advantage of the re-claimed site and are often seen in large numbers.

In addition to supplying the community with a magnificent park that will be utilized for many years to come, Lafarge also remedied other areas of concern. Storm water needed to be con-trolled on the site and adjacent properties. In redesigning storm water controls, Lafarge created several on-site drain tiles as well as drainage areas and tiles for the neighboring subdivisions and farms to allow them to control their storm water issues more efficiently and effectively.

Through company and community efforts working together, we prove that mining in urban areas can be beneficial for both industry as well as the community. During the life of the mine, the site did not receive any violations from State or local government entities, proving that mining can be performed successfully while remaining within regulatory guidelines.

In addition to the Illinois reclamation award, Lafarge was also nominated for and won the 2019 Interstate Mining Compact Commission (IMCC) National Reclamation Award, an award won for the third year in a row by an Illinois aggregate mining operation.