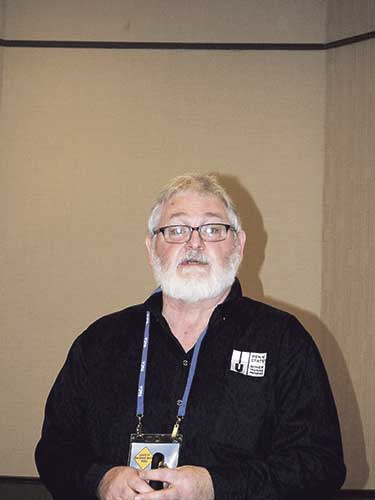 When people think of what takes place in a quarry operation, two of the most obvious conditions that come to mind are dust and noise. The dust and noise of the blasting, the loaders, the haul trucks and the screen plants, is a given. While most quarry workers are prepared for these conditions when they encounter them, there are other dust and noise hazards that go unnoticed as employees go about their daily activities. Recently, at the PACA-MSHA Spring Thaw in Grantville, PA, Joseph Flick, manager of the Miner Training Program at Penn State University’s Dept. of Energy and Mineral Engineering, focused on some of these potential hazards and their remedy.

Flick began by calling attention to “why” noise affects our hearing rather than the “what” that causes the noises that damage hearing. “We don’t ‘get used to’ noise (in our surroundings),” he observed. “Our hearing is damaged and we don’t hear it. There is noise all around us. We need to recognize when this noise has the potential to damage our hearing. Noise is unwanted sound.”

He said that daily exposure to equipment in the mining industry such as crushers, drills, blasting, hand tools, and ball mills are but a few of the noises that workers encounter every day. Workers are also exposed to noise outside of the work environment. Loud music, noisy hobbies, lawn mowers and power saws all take their toll on hearing loss over time.

“Young people with MP3 players, playing the music at very high levels, will no doubt experience hearing loss in the years to come,” he said. “There is noise all around us. We only get two ears!”

Explaining the basics of sound, he said the principle that it is air movement creating pitch and volume are the conditions that our auditory systems are designed to monitor. If the effects of this pitch and volume are damaging, the loss is not naturally repaired. The tiny “hairs” in our cochlea that are lost when this damage takes place (these hair-like cilia are the mechanism that help change the vibrations to electrical impulses that travel to our brains as “sound”), do not regrow to repair the hearing loss.

He noted that much of MHSA’s and OSHA’s attention is focused on remedying the problem at its source more so than finding ways to improve personal protection. Personal protection however, is still the first and last line of defense for the typical worker.
Engineering controls for noise abatement include redirecting the noise source, isolating (enclosing) the noise, isolating those affected by the noise and interrupting the noise along its pathway. Additional remedies may include insulating the noise source or the receiver of the noise, redesigning the machine that causes the noise or installing baffling (mufflers) that reduce the noise levels. In any case, regulators are looking to reduce noise levels to less than 90 decibels at the noise source. Nevertheless, this often disregards the worker’s exposure to other ambient noises.

According to the Center for Disease Control and Prevention/NIOSH, the recommended exposure limits (RELs), established in 1998 to protect workers against hearing damage are 85 decibels over an eight hour period. At or above this level is considered hazardous. This is also based on a five day workweek. This does not include the additional noises that a person would experience in their off-work hours.

More importantly, since decibel increases are measured exponentially with respect to their affect on the human ear, each increase of three decibels cuts the personnel exposure time in half. So if 85 decibels is safe for eight hours, only four hours is acceptable if the noise level increases from 88 to 91 decibels allows two hours and 100 decibels only permits 15 minutes before the maximum daily allowable dose is achieved. With this in mind, some noise level examples include a car horn that blares at 110 decibels, rock bands playing music at 120 plus decibels, a jet engine roar that measures 130 decibels or a bulldozer moving earth at 90 to 100 decibel level.

Flick said that correcting problems is easier at surface mining sites than in underground mines. Underground, where unusually high noise levels exist, workers should only be in that environment for a limited time. In some cases, close proximity to high noise levels should be prohibited completely. “It doesn’t take a lot of noise to be loud,” he said.

He said that dust conditions are similar in the way that they can damage workers over time, little by little. He said that over a lifetime a person would have breathed approximately 450 million times. During that time, depending on what is suspended in the breathed air, microscopic particles like the quarry dust found at the worker’s job sites, can make their way into the worker’s lungs, causing damage in the alveoli sacs where the oxygen passes into the bloodstream. Even the dust on the floor of equipment that workers operate can become a problem.

Other sources of “unnoticed” dust include haul roads, leaking door seals on mobile equipment, poorly ventilated shop areas and inadequate underground ventilation systems. Dust particles as small as ten microns or less can affect the operators in the cabs of their equipment. He said that this microscopic dust is just as important to a worker’s health as is the dust that is easy to see on haul roads or around crushing and screening equipment.

Flick noted that silica dust is more challenging to workers than is coal dust. Silica kills the macrophages — specialized cells within the alveolar sacs that work to contain and eject the dust particles. When coal dust enters the alveoli sac, the macrophage encapsulates this dust and expels it. Silica dust however affects the macrophage cells differently and the cells die, causing scar tissue. Ultimately, this damage reduces breathing capabilities. Limiting or eliminating the worker’s exposure to dust is critical.

How much and how long workers breathe in dust, is cause for alarm. While a respirator might be necessary, in most quarry situations, a respirator is not the ultimate answer. Eliminating the dust surrounding the workers is the better choice. For more information visit http://sites.psu.edu/minertraining/ or contact Joseph Flick at 814-865-7472.