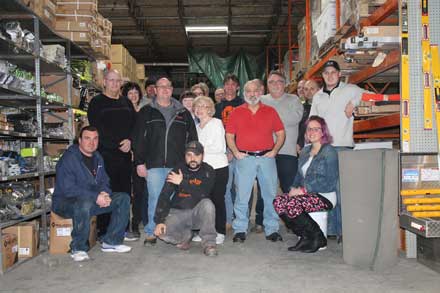 The year 1976 is famous for the massive celebrations marking the 200th year of America’s founding. Just as America was celebrating its independence, John C. Smith Jr. of Syracuse was ready to start out on his own.

“He came home one day and said it was time to move on and open up his own business,” explained Joanne Reed, John’s daughter. Smith had been working for a family-owned general contracting firm for a number of years and was the company’s president. Through this experience, John had made a number of contacts and knew the business thoroughly — but wanted more. So, along with his wife Josephine and other family members, Smith formed J.C. Smith Inc. Construction Supply.

Smith opened his first store in Syracuse and went on to open a second location in Ithaca before he retired in 1992. Upon Smith’s retirement, he gave Josephine 51 percent of the business and split the rest among his three children. With Josephine in charge of the business, three more locations were added: Albany, Rochester and Binghamton. Joanne took over after her mother passed in 2013, and J.C. Smith has since added a location in Utica, for a total of six.

One reason Joanne says that J.C. Smith was able to grow under her mother’s leadership was that it became a M/WBE (Minority and Women-Owned Business Enterprise) in New York State. Getting M/WBE certification gives J.C. Smith opportunities to sell their products and services to New York state agencies. The goal of the program is to promote fairness, equity and help those who are certified to compete. “It’s helped us tremendously and we’ve been able to secure contracts with the NYSDOT,” says Joanne.

Financial controller and head of M/WBE sales for J.C. Smith, Cindy Hurley, concurs with Joanne. She explains that New York state as well as federal projects have required M/WBEs more over the years. “We’re one of the few equipment supply and rental places in the area, and we’ve gotten a nice little niche as we can take care of many contractor’s equipment needs,” says Hurley.

While a business/contractor may begin using J.C. Smith because of its M/WBE status, they often continue after the contract has ended because of the attention paid to them. The needs of the customers are always top priority for J.C. Smith and its staff. In fact, Joanne notes that the reason the company opened more locations was to meet the needs of its customers.

Their customers are also the reason J.C. Smith has such a wide selection of construction equipment available. In fact, the company carries 240,000 items. Stew MacDowall is the longtime rental manager at J.C. Smith, Inc. When asked about their typical customer, MacDowall said, “We don’t have a typical customer, they’re quite diverse. We sell to everyone.” He then rattled off a list of industries their customers come from; including paving, landscaping, homebuilding, concrete and paving.

Appealing to such a wide base can be challenging in terms of logistics. However, there are also economic benefits. Syracuse remains the home base of J.C. Smith. The store has five warehouse buildings — in addition to the actual store — where they house equipment. When equipment is ordered from the manufacturer, most of it comes to the Syracuse branch and is then delivered to the satellite stores as needed. The equipment comes from all over the world since J.C. Smith deals with many manufacturers. The amount of space and number of outlets allows J.C. Smith to purchase in volume, giving them buying power.

The construction industry is cyclical, and in many ways it is tied to the general economy. This can be challenging for businesses that are dependent upon the construction industry. J.C. Smith has found a way around this issue. MacDowall said, “When the economy turns down in one phase, we stay strong because we take care of it all.”

One might think that big box stores pose a challenge to J.C. Smith. After all, despite the buying power they have gained from opening the six stores and the massive number of items sold, they simply cannot be what the big box stores are. So they compete in other ways — including quality. Joanne explained, “We sell better quality and more expensive tools and equipment than big box stores. Customers come to us to repair purchases people made from big box stores.” In addition, J.C. Smith is more in tune with their customer’s needs.

One way that J.C. Smith stays in tune with customer needs is through its employees. The company currently has 70 employees, including 30 in the Syracuse store. Five of those employees have a combined 130 years of experience. MacDowall — one of those — remarked, “I know 80 percent of my customers by name and who they work for. We have steady, loyal customers who continue coming to the stores because we satisfy all their equipment needs.” Not only does J.C. Smith have the equipment needed, the staff is extremely knowledgeable about the inventory and is determined to help customers with any questions they may have.

Getting out to meet its customers is also a staple at J.C. Smith. One way they do that is by attending the Hard Hat Expo, which they have done since the event began back in 1986. Joanne considers it one of the best shows they go to. The show, held annually at the New York State Fairgrounds in Syracuse, draws upwards of 8,000 people. Joanne proudly states the company was one of the first contributors to the expo and continues going out of need. “It has made us far more visible and allows us to show contractors, ‘this is J.C. Smith, and this is what we do and what we sell.’”

Returning to the Hard Hat Expo continues to be a boon to J.C. Smith. “Going to the show and meeting customers face to face helps us to expand our reach,” added Joanne.

From its founding, J.C. Smith has come a long way. They have customers in every state and outside the country. However, Joanne said there is always room for growth and change. Since taking over, a focus of Joanne’s has been modernizing the technology the company uses. This includes the inventory system, point of sale and website. Another goal is to “prepare the next generation, so they can continue to see it grow.” Currently, there are four people from the next generation involved in the store including Joanne’s daughter.

The next generation is getting an education in what it means to be responsive to customers’ needs. J.C. Smith handles a multitude of needs from those in the construction industry. As Hurley stated, “We can help from the beginning to the end of construction.”