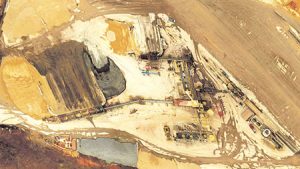 “When a new drone is coming, for me, it’s like Christmas,” says Bastian. For Bastian who says every day is an experience to learn about things you can do with a drone, interest in aviation began at an early age. The entire Bastian family is engaged in aviation as Andy’s father and older brother are pilots, and two of his uncles were Navy pilots. As a child, Bastian’s family would pile into the car every summer and go to different air shows near and far. After high school, Bastian went into the Air Force and became a licensed aircraft mechanic. After leaving the military, Bastian worked on corporate jet aircraft and owned a few different businesses related to aviation.

While Bastian conceived of Inspectifly a few years ago, he did not start the business till August of 2016. He started just after the government passed regulations making it legal to operate drones without an FAA waiver. The ability to put a camera on a remote control aircraft has always intrigued Bastian and his interest in drone technology is vast. Bastian says, “When you’re in an aircraft and flying, you get different perspective from what you see on the ground.  Drones allow you to get that perspective anywhere in the world.”

Inspectifly’s customers are primarily located in the Midwest, Northeast, and Mid-Atlantic states. Inspectifly prides itself on being a professional service company. They are fully licensed, get waivers when they fly, and are knowledgeable about FAA regulations. Inspectifly manages this aspect, so its clients need not worry. The reasoning behind this is simple, “We want customers for life and we provide the best                 capabilities on the planet,” says Bastian. Bastian adds companies choose Inspectifly because they offer everything a company might need in a drone company. In addition, besides being reliable, Inspectifly guarantees their data, “We get what they need and if it’s not right, we’ll redo it.”

Because drone technology is so new, it’s constantly changing. Bastian notes that drones change yearly as they double in efficiency, have more robust flight systems, and improved flight controllers. Inspectifly is determined to keep up as Bastian scours the internet for news of drones and technology every day. However, he says, “Each drone has its own advantage. New ones don’t replace whole fleets but add to the capability.” Inspectifly strives to keep up with technology as new aircraft and camera systems come out to insure they have the ability to do anything that the latest gadgets allow.

Inspectifly uses DJI products. Bastian feels they have the most stable equipment and best image sensors. “The options that come with their platforms allows us to do everything we need to do and their equipment is very reliable,” says Bastian. When Inspectifly is performing close inspection work, they use a Flybility, which is an Elios model. This model uses DJI components for their flight systems, which Inspectifly uses for its other drone systems, and therefore, the operators can quickly come up to speed.

When sending a drone over a quarry, Inspectifly uses a special set of software and a grid map, which takes consecutive images of the grid, so all images overlap each other.

High resolution cameras are used as they give better accuracy of finished results. It can be brought into auto cad or they run preliminary measurements. This can help mine companies know how much material is in volumes of their piles in a fraction of the time it would take them to do it manually.

One new drone used by Inspetifly is the DJI Matrice 210 RTK. It can carry dual cameras where the previous mode had one. This allows Inspecitfly to perform a visual and thermal inspection on the same flight. The drone can also carry cameras on top — the first of its kind. This helps Inspectifly to do underside bridge inspections and has collision avoidance. Bastian says the drone has a dual operator with one flying the craft and the other one operating the camera.

Some elements of the technology that Bastian finds quarry owners value is volume metrics. Inspectifly performs volume metrics and 3D stockpile measurements. Depending on the size of the quarry, Inspectifly can do most mapping jobs (size dependent) within a day, and the data is more accurate than ground   measurements. It takes Inspectifly’s software two days to process the data and the typical turnaround time till they transfer the data is four to five days after the site visit. “Companies can do it more often because it takes less time, and it’s less expensive. The more often they take stock of what they have, the more reliable data is and industries can use the data to make business decisions,” says Bastian

While the technology makes tracking product at the mines much easier, challenges still exist. The greatest challenge, according to Bastian, is quarries aren’t necessarily drone friendly. Often, product is leaned up against a wall. Since the slope of the wall is unknown, it’s difficult for the software to accurately measure. However, Bastian says, “There are ways to get around it that we’ve figured out, and the software is good.” Another challenge is some people have yet to accept tech and are reluctant to change. Bastian believes that as people become more educated about the benefits of drones — they provide as good or better data at a fraction of the cost — they will come around.

As Inspectifly and Bastian strive to stay ahead of the curve on drone technology in order to provide their customers with the best technology, they are always looking forward. These days, Bastian is looking at LIDAR which will allow drones to see through vegetation. According to Bastian, LIDAR will help quarry owners more than anyone as the data will be even closer to exact. At this point, the cost of the technology for drones is excessive and it outweighs the benefits. You can be sure when the technology comes on board, Bastian and Inspectifly will be purchasing the drone that has LIDAR Technology. That day will be another Christmas for Bastian.