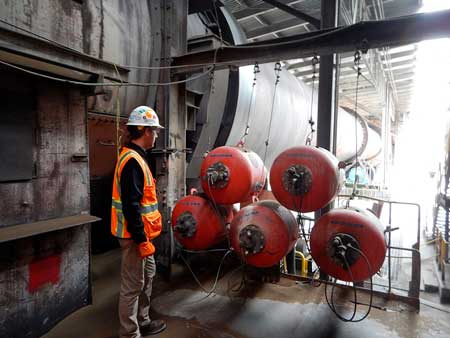 A global leader in bulk material handling equipment has helped a U.S. cement plant resolve clogging issues in its clinker cooler, using advanced air cannon technology and an innovative mounting strategy. HeidelbergCement’s Lehigh-Hanson facility upgraded to modern air cannons and set them in a long U-shaped pipe configuration away from the hottest area of the cooler to offer powerful material flow support with easy maintenance. The result is a safer workplace, extended equipment life, less downtime and a lower cost of operation.

Where clinker discharges from the kiln and falls into the clinker cooler, chunky material tended to cling to the static cooler grates and/or cooler curbs. Air cannons are commonly used to remedy this phenomenon, but if they experience clogging from backflow or if they are set in an environment that is too hot to properly maintain them, accumulations inevitably form.

Operators at the Lehigh-Hanson plant in Leeds, AL — the oldest continuously operating cement manufacturer in the state — worked closely with Martin Engineering on an innovative air cannon configuration to resolve such an issue. “Our cannons were located close to cooler walls where the conditions were very hot and dusty,” said Mike Schutt, Production Manager for Lehigh Hanson.

With a 24-hour production schedule, 175 tons (160 tonnes) per hour of raw material is passed through the kiln, reaching approximately 3,500º F (1,900º C). Accumulations formed at the discharge point, reaching up to 20 feet tall in as little as a single shift. The buildup could stretch back into the kiln and cause serious problems that result in excessive downtime and an increased cost of operation.

Lehigh-Hanson’s initial solution had five cannons with standard OEM piping leading directly to problem areas located near the hottest part of the cooler. The area had an average sustained temperature of 150º F (65º C) to 165º F (74º C), which made maintenance during operation extremely difficult.

Over time, fine particulates from discharged clinker would migrate up the air cannon discharge pipe. Clinker dust would also settle within the cannon tank, diminishing the tank’s capacity and decreasing the power and effectiveness of the shot.

Previously, workers donned hot suits and were required to remove the entire cannon from the manifold for valve service. Reported to have been one of the most unpleasant projects in the plant, at least two workers were needed to perform the maintenance and, due to the heat, they were only able to remain in the area for about five minutes at a time.

“The system broke down so often, we finally just had to leave it and monitor the material buildup until the very last minute, then shut down the system for maintenance,” Schutt said. “This allowed us to get the most production possible, but it caused at least a day of unscheduled downtime a few times per year.”

The Sustainability Commitments 2030 program aims to make HeidelbergCement an industry leader in workplace safety. Lehigh-Hanson’s expectations for a proposed solution required the system to:
• Be highly reliable and accessible.
• Eliminate material buildup within the cooler.
• Withstand a 24/7 production schedule.
• Reduce or eliminate backflow.
• Be safely maintained with minimal exposure to heat.
• Decrease the amount of unscheduled downtime.
• Reduce the amount of equipment failure.

Technicians installed five 150-liter Martin® Hurricane™ Air Cannons, lifting the units away from the discharge area and up several meters to a preexisting platform. Located well away from the hot wall and the kiln’s discharge zone, the cannons can be serviced without having workers wear the special high-temperature equipment.

Connected to the existing compressed air system, the Hurricanes supply more force output with less air consumption at half the size of other designs. Each unit fires a shot of air up to 120 PSI (8.27 BAR) from a pressurized tank through the long pipes and spreads the airstream across the area of buildup.

To prevent unintentional firing due to drops in pressure, the valve requires a positive signal from the solenoid in the form of an air pulse. Able to be located up to 200 feet away from the cannons, the solenoid panel also allows operators to fire manually if needed.

The Hurricane’s valve faces outward, opposite the pipe end, and is serviced without removing the cannon tank. A single technician simply detaches the air and solenoid connections, removes the 8 bolts from the valve assembly and slides it out for inspection and maintenance.

“After five years of constant operation, the results have been better than we ever expected,” said Schutt. “Since the installation, we have had a significant reduction in downtime due to accumulation.”

The lack of heat exposure has reduced the impact on the equipment itself, increasing the life of the valves and the tank. Setting the tanks in an easily accessible and safe area means workers can inspect the equipment more often and perform maintenance on a single cannon without downtime.

The cannons no longer experience buildup from backflow within the tank, allowing them to operate at full capacity. “Overall, we are very satisfied with the design and the equipment,” Schutt concluded. “I can see this configuration becoming a standard design across the cement industry.”

One thought on “Innovative air cannon positioning for easier maintenance”