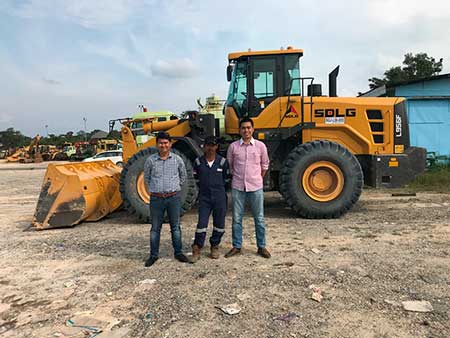 Five SDLG wheel loaders are helping to load mud and petroleum-contaminated soil onto trucks every day at an oil field in Riau, Sumatra. The material is then taken away and recycled into cement so that nothing is wasted.

An oil field in Riau, Sumatra, in Indonesia produces nearly 200,000 barrels of crude oil per day. But crude oil isn’t the only thing produced at this oil field; large amounts of mud and petroleum-contaminated soil are also generated as by-products, which can be used as ingredients in cement production.

For eight hours a day, five SDLG wheel loaders (comprising three LG968L and two L956F units) work onsite to load the unwanted by-products onto trucks. The trucks then transport the mud and petroleum-contaminated soil to cement plants in other parts of the country for recycling. The fuel efficiency of the SDLG loaders is helping the company keep costs down and increase its margins.

“We keep records of how much we refuel the wheel loaders daily,” said Sumiarti, a director of PT Sumigita Jaya, the company leasing the machines to the oil producer. “The L956F units average about 15 to 17 liters per hour, which is relatively low and therefore helps us keep our costs down.”

The Pekanbaru, Riau-based company is charging an hourly rate that includes machine operators and fuel. The pair of L956F wheel loaders are PT Sumigita Jaya’s latest additions to its 40-machine fleet, which also includes two SDLG motor graders (both G9190 models). PT Sumigita Jaya bought them in 2017, from local dealer PT Indotruck Utama after its existing SDLG LG968L units had impressed with their performance at the same oil field.

“Since we charge a flat hourly rate, the less fuel the machine consumes, the more we save on costs,” Sumiarti explained.

The L956F, while smaller than the 6 t-rated LG968L, is highly-suitable for general applications. Part of the new three-model range of F-series machines introduced in May 2017 across Southeast Asia, the L956F features gull-wing designs on the engine and heat dissipation hoods to facilitate easy access for maintenance.

“Our operators have really liked operating the new F-series machines. The air-conditioned cabins are not only comfortable, but their curved windscreen design offers a wider field of view,” Sumiarti said. “In addition, they like that a digital display panel indicates any malfunctions in real time. And, if a fault is detected, a centralized electrical system allows for easy repairs.”

These attributes cement SDLG’s reputation for simple but intuitive and cost-effective machines that can do the job in even the harshest and most unforgiving of environments like oil fields.