Skip to content
Editor’s note: The opinions and views expressed in the association’s commentary do not necessarily reflect those of Lee Newspapers Inc. and RockRoadRecycle.
Source: E-SCRAP NEWS
posted July 25, 2018 by Clayton Miller

The concept of extended producer responsibility (EPR) is spreading and evolving around the world. And with recently passed legislation, the Canadian province of Ontario may now be ground zero for a new way of managing end-of-life electronics and other electrical items.

If this is indeed the future of e-scrap, how does a processor or refurbisher prepare? This article offers the viewpoint from one processing company that is heavily involved in the current provincial system and is working to make sure it remains a leader in the transformed framework.

The starting point for the policy transformation in Ontario was the passage of the Waste Free Ontario Act (Bill 151) on June 1, 2016. With a circular economy as its eventual goal, Bill 151 is considered groundbreaking for several reasons:

The Waste Free Ontario Act marks the first time a sizable jurisdiction has embarked on a path to shift toward extended producer responsibility (EPR) for all products – e-scrap, tires, packaging, compost and, eventually, everything else. The intent of the legislation is to put responsibility for waste at the feet of the producers and manufacturers that made the products in the first place.

The passage of the bill was helped by some grim recycling realities. Ontario, Canada’s most populous province (with nearly 14 million inhabitants), currently sends more than 12 million metric tons of wasteto landfill every year, according to the provincial government. Absolute greenhouse gas emissions from waste have risen 25 percent between 1990 and 2012. Every year, resources valued at an estimated 1 billion Canadian dollars are lost to landfill across Canada.

To understand Ontario’s future, it may be instructive to look briefly at Europe, where the original progress toward EPR was made.

A couple decades back, Sweden and Germany led the way in deciding that rather than offloading responsibility to municipalities and consumers, the industries that made and sold products should take responsibility for the waste stage.

This shifted the focus from how the product was manufactured to how the product was designed and led to the introduction of the term “extended producer responsibility” in 1990. EPR programs soon spread from Europe to countries around the world, with the terms “product stewardship” or “shared stewardship” often used synonymously. According to the Organisation for Economic Co-operation and Development (OECD), as of 2016, there were about 400 EPR systems in operation around the world, almost three-quarters of which were established since 2001.

In Canada, the province of Alberta was the first to launch an electronics stewardship program in 2005. Other provinces followed suit and over the next decade, a program was launched in every province. Over time, these programs have been harmonized nationally under the Electronic Products Recycling Association (EPRA), which has helped create certainty and a common language for processors, stewards and regulators. It is due to the forward-looking provincial programs and EPRA that Canada has some of the highest per capita electronics recycling rates in the world. EPRA will certainly be instrumental in shaping the industry and will have a major role to play as things evolve in Ontario and beyond.

The situation in the U.S. has been a bit more fragmented, with roughly half of U.S. states having passed electronics recycling laws. But while most of the laws put some requirement for recycling funding at the feet of producers, the specific frameworks vary across the country. And manufacturers have complained that the lack of harmonization has created management challenges.

How act will affect e-scrap

The legislation’s specific impact on WEEE recycling is yet to be understood as details are still emerging. Things will change though – that’s what we’re sure of.

At present, the cost to recycle electronic material is covered by an environmental handling fee added to the purchase price at point of sale. The fees are set by product type (not brand) by the existing stewardship program. They are loosely based on the actual cost of recycling but don’t take into account differences by brand that would cause one unit to cost more or less to recycle than another. Because these fees are not representative of the actual cost of recycling, manufacturers are not incentivized to make their products easier to recycle. This issue can be seen firsthand in smartphone design.

Who remembers the days when you could easily pop the battery out of your phone? The move toward glued-in batteries is representative of a designer not thinking about (or being responsible for) ease of recycling at the end of life. The decision to glue rather than screw would have played out differently if disposal was something designers had to consider when conceiving the product.

In the future, individual manufacturers will be required to meet certain performance targets, such as collection, accessibility, education, reuse and recycling. OEMs can choose to achieve these targets on their own or through a collective, but they cannot discharge their responsibility to a third party. If targets are not achieved, they are individually liable.

The path manufacturers choose under the new system will ultimately depend on their desire to manage the stream internally or externally, the type of product they manufacture and a host of other factors unique to each business. What is certain is that one way or another individual manufacturers will be on the hook to ensure their share of end-of-life electronics is recycled responsibly. They will fulfill the obligation by engaging processors and assigning some or all of those processors’ volume toward their targets.

Adding reuse to the fold

However, the new legislation in Ontario aims to not only incentivize innovative design and collection models but also to encourage reuse by counting it toward diversion targets. As things stand today, it is difficult for an e-scrap recycler to compliantly reuse products that are qualified under the provincial stewardship programs – even if that makes the most economic and environmental sense. 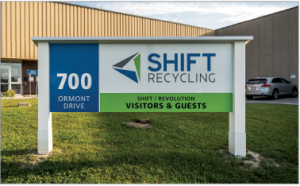 Shift Recycling, the employer of the author of this story, has recently moved to extend its presence throughout the electronics recovery value chain. The company believes that approach will leave it positioned to grow under Ontario’s evolving EPR system.

While the new legislation makes reuse a higher priority than other forms of recycling, it’s still unclear exactly what specific activities will be permitted. Canadian recyclers are advocating to allow certified, audited and traceable reuse to be counted toward recycling targets. This would mark a significant change to how stewardship performance has been measured historically where per pound diversion targets are the only metric that mattered.

Today at Shift Recycling, we are sometimes shredding nearly brand new electronics or lightly used electronics that could still have several years of life left in them because the current program framework doesn’t allow reuse. [Editor’s note: The author of this article works for Shift.] With the new legislation, we expect to get much more revenue out of the same stream, creating opportunities for ongoing investment into the sector.

To illustrate this idea, we can think of a laptop brought in to our site: Putting it through the standard Shift recycling process would cost about $5 for labor and utilities. If $10 of commodities were extracted from the laptop, a profit of $5 is earned.

However, if the same laptop is processed through the company’s Revolution ITAD division for resale, it might be resold for $150 after $10 is spent on parts and $20 on labor, earning a profit of $120.

The added environmental benefit of reusing versus destroying is a bonus.

The dust hasn’t settled on much of this. The province’s Resource Productivity and Recovery Authority has just appointed its board members and is just in the process of staffing and enabling a new registry that will be able to accept data from producers, retailers and service providers, including recycling collectors, haulers and processors.

Shift is using this time period to talk to as many people as possible about what we would like to see under the new regime.

We have a well-thought-out position and specific “asks” of government officials and regulators. When we talk to them, we are advocating for very specific outcomes, including:

Electronics recycling stakeholders in Ontario and elsewhere should not assume regulators understand the intricacies of our business. It’s up to individual companies to figure out what would hurt or help the business and to communicate these things to decision-makers. It is much easier to ensure the outcome you desire before the rules are set it stone.

While it’s important to make sure e-scrap entities have a strong voice in the development of specific rules and regulations, it’s also true that as a jurisdiction’s framework transforms, uncertainty is part of the process.

We here at Shift believe the proper processor response in such situations is to spread the risk around. Engage new verticals. Identify niche specialties. Launch new services. Move up and down the value chain and get closer to the generator. The winner in this game will understand the needs of customers and be able to deliver the service profitably.

That’s why we purchased the Revolution ITAD business in 2016. Banks have different needs than municipal waste departments. The Revolution brand allows us to have different conversations with customers, leading to different business opportunities than we would otherwise have been exposed to.

The Waste Free Ontario Act is an ambitious rethink of how to manage waste. While the focus is currently on recycling tires, batteries, e-waste and curbside recycling, eventually all waste will have some sort of recycling requirement.

Consider this powerful statistic from the Ontario Ministry of the Environment and Climate Change: Every 1,000 metric tons of waste diverted from landfill generates seven full-time jobs, CA$360,000 in wages and CA$711,000 in GDP. Thus, the economic benefits of recycling more waste could be huge.

With a current provincial recycling rate of only 25 percent, there is significant room for improvement. Considering electronics specifically, Canada has done a good job enacting and harmonizing provincial stewardship programs from coast to coast. Ontario is taking it a step further with this Act, and this is an opportunity to foster the next wave of innovation in e-scrap recycling.

Industry players will be encouraged to innovate, collaborate and solve problems in a competitive environment that values compliance, security and environmental performance. It’s an opportunity that is there for the taking, and the rest of the world will be watching.

Clayton Miller is vice president of business development at Shift Group of Companies and can be contacted at cmiller@shiftrecycling.com.